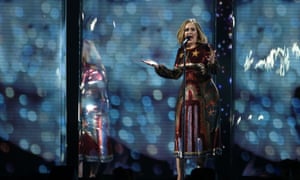 Adele at the 2016 Brit awards, whose voting academy has been reformed to improve its gender balance. Photograph: Justin Tallis/AFP/Getty Images

The upper ranks of the UK’s music industry are still “a man’s world”, with women in only 30% of senior executive roles despite making up more than half of entry-level positions.

The findings appear in the most comprehensive diversity survey of the business side of the music industry to date. Examining the balance of gender and ethnicity in record labels and publishing companies, it found that while both female and black, Asian, and minority ethnic representation was progressive at entry level, the higher up the executive ladder, the worse the representation got.

In the survey, conducted by a diversity taskforce set up by the body UK Music, women made up 60% of interns, 59% of of entry-level business roles, but only 30% of senior executive positions.

This was also reflected in the age range of women who worked in music. Women made up more than half of the workforce aged 25 to 34 but only 33% of those between 45 and 64.

Tara Richardson, senior manager of Q Prime artist management, who has managed the band Foals for nine years, said the drop-off could partially be attributed to women taking time off to have and raise children. But she added that the industry still remained hostile to promoting women to senior positions.

“I’m embarrassed to be in an industry with those statistics,” she said. “Yes, it’s a pretty impossible environment to work in when you have children, particularly if you need to be going out to gigs at night, so that is a factor here. But there tends to be a lot more of that ego-led front with men in music and its an industry that still rewards and promotes that arrogance.”

The increasing divide was particularly stark between the ages of 35 and 44, with a drop-off of 309 women compared with just 80 men.

The findings were described by figures in the music business as “embarrassing”, and led to calls on senior executives to wake up to the “unconscious bias” and move the industry away from one that “rewarded and promoted male ego”.

Jane Third, senior vice-president of record label Because Music, said a major reason the industry was failing to promote women to senior roles was because women were rarely credited with success. “In my experience, women … tend to be described as just ‘having been in the room’. There’s a perception that women have a passive role, whereas men quite often are credited with their success. And that stops them being considered promotable above a certain level,” she said.

Despite 20 years in the music industry, Third said she had never been head-hunted, unlike several male colleagues she had worked with who were her junior. “If you don’t feel like you’re being compensated enough for the work that you’re doing – if you’re always going to have to work twice as hard as a guy – then why would you want to keep doing that?” she said.

The survey comes at a moment when the music industry has begun to acknowledge longstanding issues of representation. Ged Doherty, who chairs the industry body BPI, instigated the biggest shakeup of the Brits voting academy in November, inviting 700 new voting members to shift the gender split from 70% men to almost 50-50 male and female, as well as 17% from BAME backgrounds.

Paulette Long OBE, who has worked in the music industry for 30 years and co-chaired the UK Music taskforce, said that as a black woman she was still shocked at how rarely she saw herself reflected in the upper echelons of the music industry. “People might look at that age group, 35 to 44, and just say it’s the time when women are having children,” said Long. “What I’ve been hearing over and over again from women is the difficulty there seems to be in being able to move up the scale, in an area that suits you.

“If they want to step into the business executive side or arenas that are not perceived as traditional roles for women, that’s where the difficulty comes about, that pathway is not open to them. And also there’s a level of confidence and support that’s needed and is missing.” The music industry, she added, “is a man’s world and it is still a tough place to be as a woman”.

Not everyone agreed that gender bias was an issue. Rebecca Allen, the managing director of Decca records, said: “I honestly believe that the door is wide open to women. Young women I’ve come across in the last few years have no fear and quite frankly stand as tall, if not taller, than their male colleagues. It gets harder for everyone going up the ladder – men and women. Our industry is so competitive, you’ve just got to be brilliant.”

The survey also looked at ethnic diversity and found that at intern and entry levels, the proportion of workers from BAME backgrounds was high, at 24% and 20% respectively. This appears to show that the recent push to recruit more diverse candidates into the industry has been successful. However, as with women, this proportion dropped off higher up the ranks, with only 11% of senior managers coming from a minority background.

Long said the increase in new recruits from minority backgrounds was to be applauded, but that it did not solve the long-term issues.

Keith Harris– who has worked with artists including Marvin Gaye, Diana Ross and Stevie Wonder – chaired the survey. He said the problem of a lack of diversity was self-perpetuating, as those in senior positions tended to promote people who were similar to them – mostly white men – and that it was time the cycle was broken. “This is damaging the industry at large because you don’t get the depth and breadth of opinion and background that you need,” he said. “People need to realise it’s not a matter of holding out a begging bowl for women and minorities in the business – it’s a matter of making people realise the industry is missing out by having such strict employment practices.”

This diversity survey will be repeated on a yearly basis, in order to maintain pressure on the industry to improve. Harris recalled bringing up this same diversity issues in the 1990s and being met with hostility from those in the industry. “People were absolutely enraged that I had dared to raise this,” he said, adding that he had been struck how much more receptive people were now. “I’m quite positive about it. I feel people are prepared to address this finally. This time it’s different – I do feel people are willing to embrace it and do something about it.”