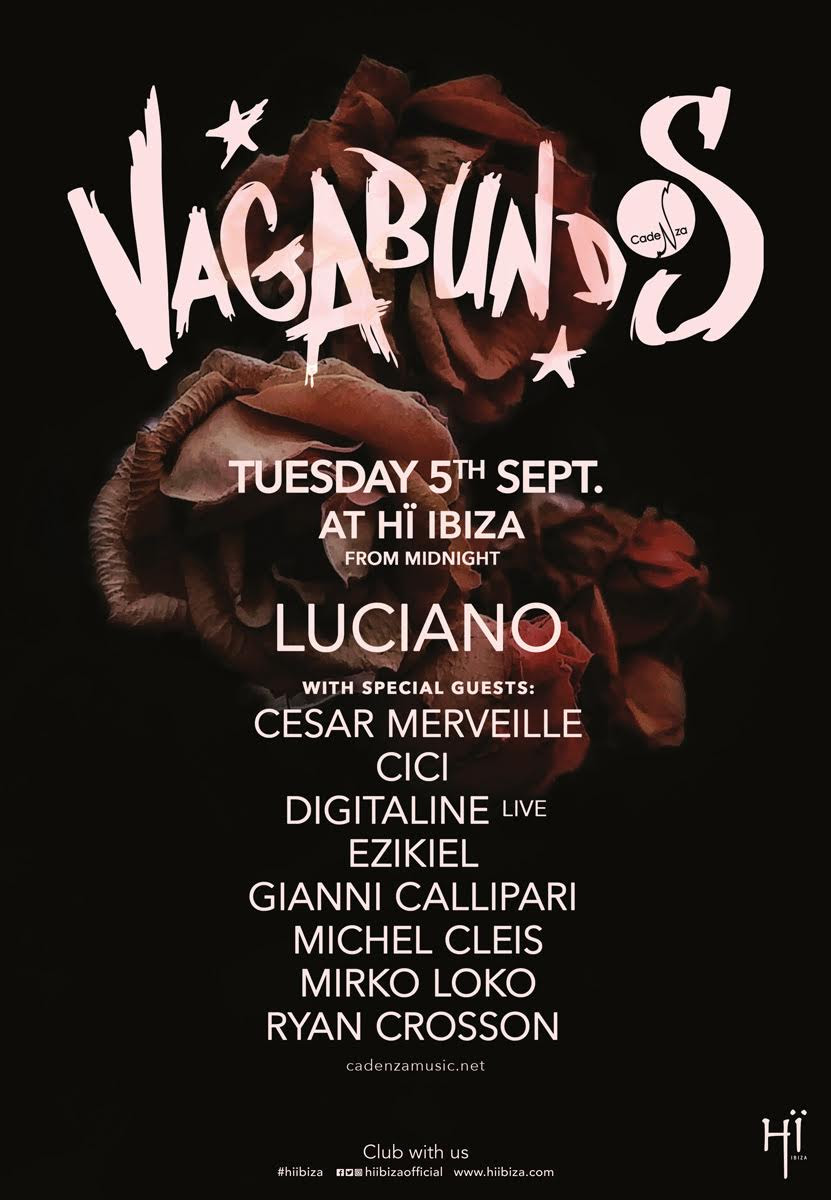 Joining Luciano for this one-off party will be Paris’s Cesar Merveille, UK rising star Cici, Swiss producers Laurent Bovey and Gregory Poncet’s live project Digitaline Live, Detroit stalwart Ryan Crosson and Switzerland’s finest exports Gianni Callipari, Michel Cleis and Mirko Loko.
This will be the only Vagabundos party on the island this year and is not to be missed! A fully immersive experience is planned. merging the brand new lighting, sound and layout of Ibiza’s state of the art superclub Hï Ibiza with the customary Vagabundos decorations, dancers, props and of course the music. The party will take place across two rooms the amazing main room – Theatre and the Club room for the duration of the night – expect a night to remember.

In the course of a few short years Cadenza has taken its place as one of the most respected electronic labels on the planet, with robust and creative group of artists led by Luciano’s example and the legendary Vagabundos night has followed suit. Beginning in 2010, the party has gone from strength to strength and having the chance to see the party at Hï Ibiza, with the most advanced sound and technologies on the island is not to be missed.

Luciano has had a phenomenal season this year and has been part of the Hï Ibiza experience from day one.  His residency at In The Dark has been nothing short of amazing, pulling in huge crowds week on week and this will be your one opportunity to catch him along with the Vagabundos / Cadenza team in action.

“Hi” is a small word that can be the beginning of a meaningful conversation or the start of a beautiful friendship that can lead to a bigger world of discovery. “Hi” is a welcome to a new era in Ibiza. The journey begins with ‘Hï Ibiza’

About Vagabundos:
Vagabundos is a party series spawned by Luciano, who felt in part a vagabond, as a world traveler from gig to gig.  It features merry band of musicians led by Luciano and his world traveling musical friends presented in a combination of whimsical upbeat atmosphere with a funky pre-war hobo themed attire.  Initially channeling 19th century vagrant attire, the Vagabundos style is an unusual celebration of a tough luck lifestyle.  Now in it’s 7th year and even though venues have changed, the style essentially remains with key pieces of attire such as hats, multiple layers often incorporating vests, face paint and roses. Musically, the lineups are fully curated by Luciano often featuring his label Cadenza’s most prominent artists but often times rounding out the lineup with upcoming talents and other artists that Luciano respects., Vagabundos, like it’s road-weary musicians, has moved around extensively in recent years starting at Pacha with brief stints at Booom! And Space before returning to Pacha in the summer of 2016.  Away from Ibiza, Vagabundos also has thrown exclusive takeovers most recently a few fully immersive takeovers of Fabrik Madrid.