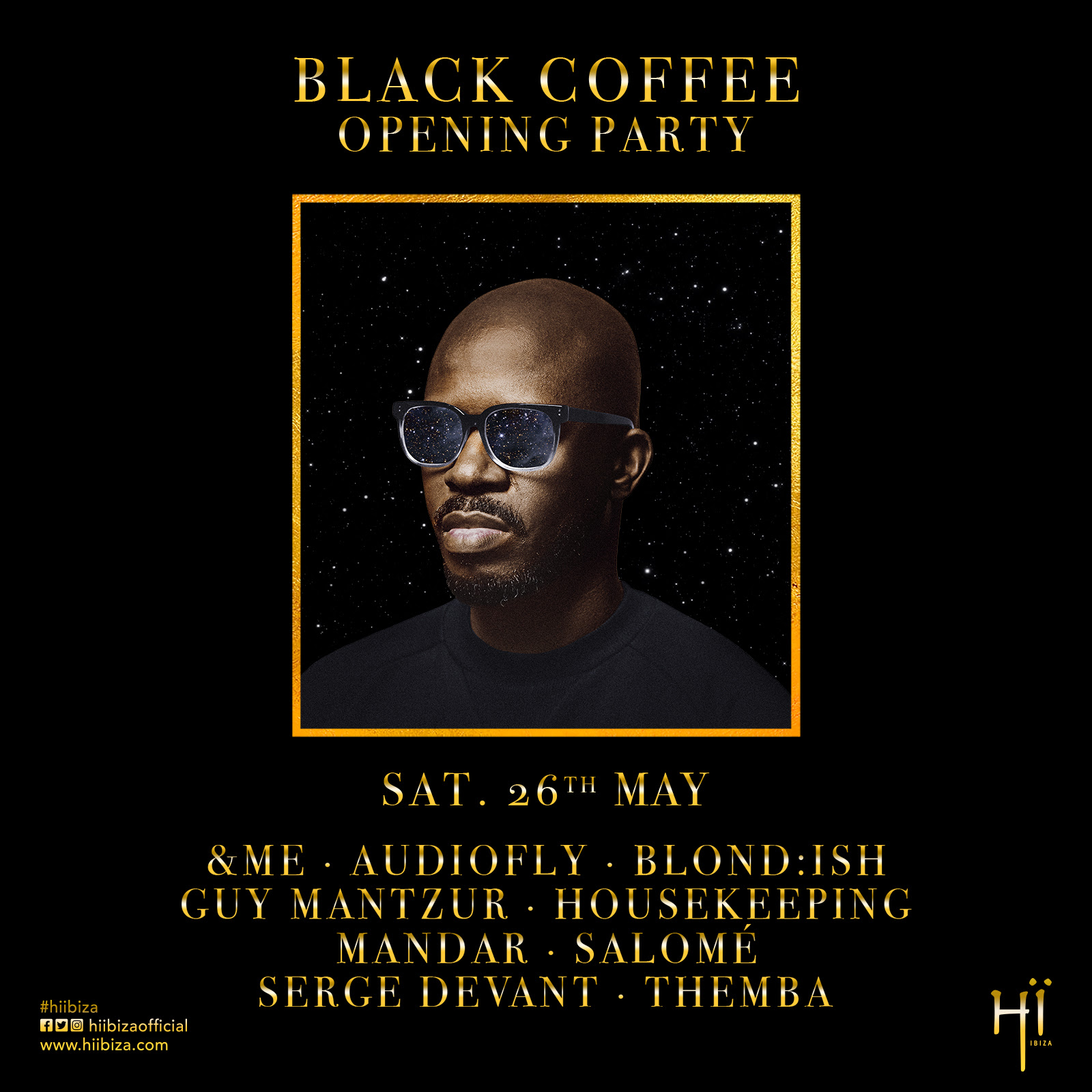 SATURDAY 26TH MAY AT HÏ IBIZA

Hï Ibiza unveils the opening party line-up for Black Coffee’s 2018 residency, which takes place on Saturday 26th May. The first date of the South African house hero’s 20-week residency will feature guests including &ME, Audiofly, Blond:ish, Guy Mantzur, Mandar, Salome, Serge Devant and Themba. Ibiza favourites Housekeeping are also announced as the Club (Room 2) hosts, in what will be the first date of their season long residency.

Following a unforgettable debut residency in 2017, South Africa’s hottest export, Black Coffee is back for another huge season at Hï Ibiza, taking the reins each and every Saturday night from 26th May – 6th October.

Black Coffee has fast become one of the biggest stars of the global electronic music scene, reaching double platinum selling status with his multi-award winning album ‘Pieces Of Me’ and collaborating with everyone from Drake to Alicia Keys. His debut Ibiza residency at Hï Ibiza was one of the most talked about parties on the island in 2017, and with his razor sharp eye for talent, party revellers can expect yet another year of flawlessly curated line-ups featuring underground acts and internationally renowned Ibiza regulars for one explosive weekly party: the only place to be on the island on Saturday night.

The Opening Party on Saturday 26th May sets the tone for what’s to come, with a stellar line-up of underground talent set to join Black Coffee.

German DJ-producer &ME, a regular fixture at Black Coffee’s 2017 residency and one of the scene’s rising stars makes a welcome return. Part of Berlin’s influential Keinemusik collective, the Berlin-based selector has built an extensive repertoire of impactful house and techno. Anthony Middleton and Luca Saporito a.k.a. Audiofly also star. DJs, producers and label owners, this talented duo have stayed true to their underground roots, touring the globe with their unique blend of house and techno for over a decade.

Canadian duo Blond:ish have become a much-loved twosome on the international club and festival circuit thanks to their original sound and infectious DJ sets, which never fail to get the party started. Tel Aviv-based electronic musician Guy Mantzur is also set to bring his unique hypnotic melodies and distinctive sound to the Hi Ibiza Opening Party.

Mandar are known for their high-quality house music. Together, they blend their styles as producers and DJs, aiming to present what they term a “unique synthesis,” combining the old with the new, the classic with the innovative. Having impressed during Black Coffee’s debut residency last year, fellow Parisian Salomé is set to make a welcome return to Hï Ibiza. New York based producer Serge Devant also steps up. Known for his groove-heavy tracks entwined with rich, soulful vocals, his hypnotising DJ sets never fail to deliver. Johannesburg selector Themba also stars.

Finally, London based DJ collective and label bosses Housekeeping are announced as the Club (room 2) residents for Black Coffee’s 2018 Saturday residency at Hï Ibiza. Housekeeping’s sell-out London shows have featured many acclaimed DJs, including Black Coffee himself, and the Housekeeping collective have played at some of the biggest international parties. Having captivated Hï Ibiza audiences in 2017 with their deep and hypnotic sets fused with tribal percussive elements, 2018 is set to be a big year for Housekeeping.

The complete season lineups will soon be revealed but expect a collection of world-class acts, special guests, awe-inspiring production and more in what is sure to be one of the hottest opening party tickets on the island.