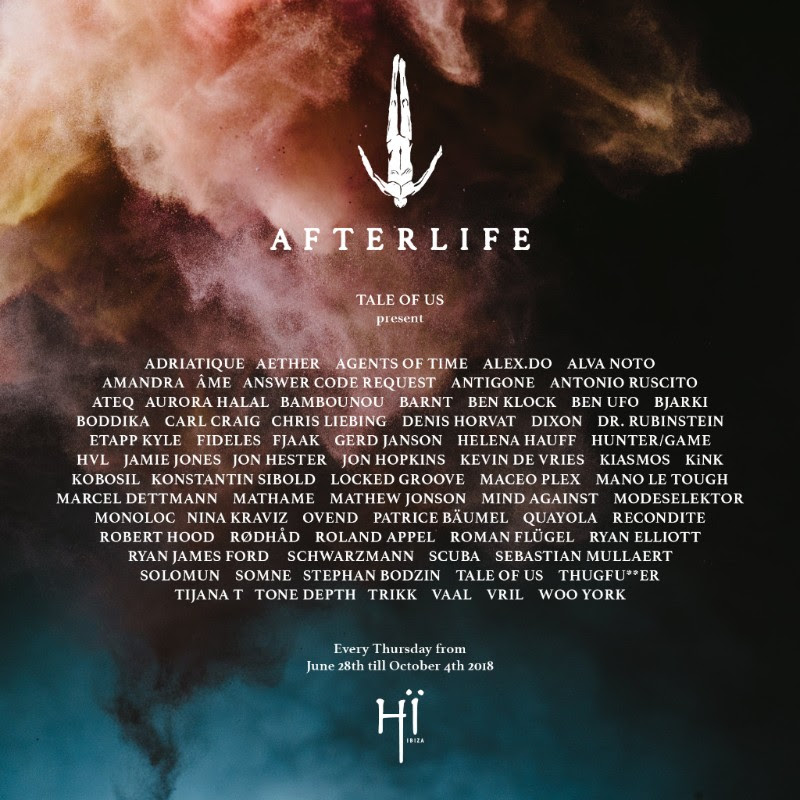 RETURNING TO THE PLACE WHERE IT ALL STARTED, THE DUO WILL TAKE OVER HÏ IBIZA WITH A BOUNDARY-PUSHING LINEUP AND CONCEPT

Tale Of Us present

World-renowned DJ and production duo Tale Of Us have revealed their 2018 Ibiza plans for their acclaimed party series Afterlife. Whilst they will be returning to the original place where the residency was launched under its current guise of Hï Ibiza, the parties themselves promise something different and adventurous. The residency will be taking over both rooms, with music and production concepts designed for each space.

Visuals, bespoke lighting, installations and tailor-made production will play a large part in the residency, in line with Tale Of Us’ increasing interest in the wider spectrum of arts. Add to that the now-iconic Afterlife man insignia above the dancefloor, state-of-the-art sound and a meticulous attention to aesthetic detail, partygoers will have a unique and all-encompassing experience.

The lineup has been carefully curated into a singular musical journey, and also includes renowned visual artist Quayola. Whilst some of the most popular names in Ibiza are in attendance – Dixon, Nina Kraviz, Maceo Plex and Ben Klock to name just a few – the residency is notable for its large roster of underground and upcoming artists, some of whom have never played Afterlife before, such as Jon Hopkins. Tale Of Us have also tapped genuine pioneers of the scene; Carl Craig, Robert Hood and Alva Noto (who plays a special live concert) will appear alongside Afterlife regulars like Mind Against, Agents Of Time, Adriatique and Woo York.

Running every Thursday from the 28th June right through to the 4th October, Tale Of Us’ Afterlife 2018 looks set to be a game-changer for Ibiza. With more details and lineup breakdowns still to be announced, as well as an elegant series of artworks commissioned for the season, this residency will cement Tale Of Us’ reputation as forward-thinking curators in addition to their well established status as genre-leading producers and DJs.

YOU ASKED, WE LISTENED… NEW TICKET PRICING FOR 2018
To mark the club’s second season and to celebrate you, the clubber, Hï Ibiza has realigned its ticket price structure for the coming season launching with a special Super Early Bird Ticket valid just for 7 days. This is your chance to take advantage of the best ticket prices available and make planning your summer much easier.