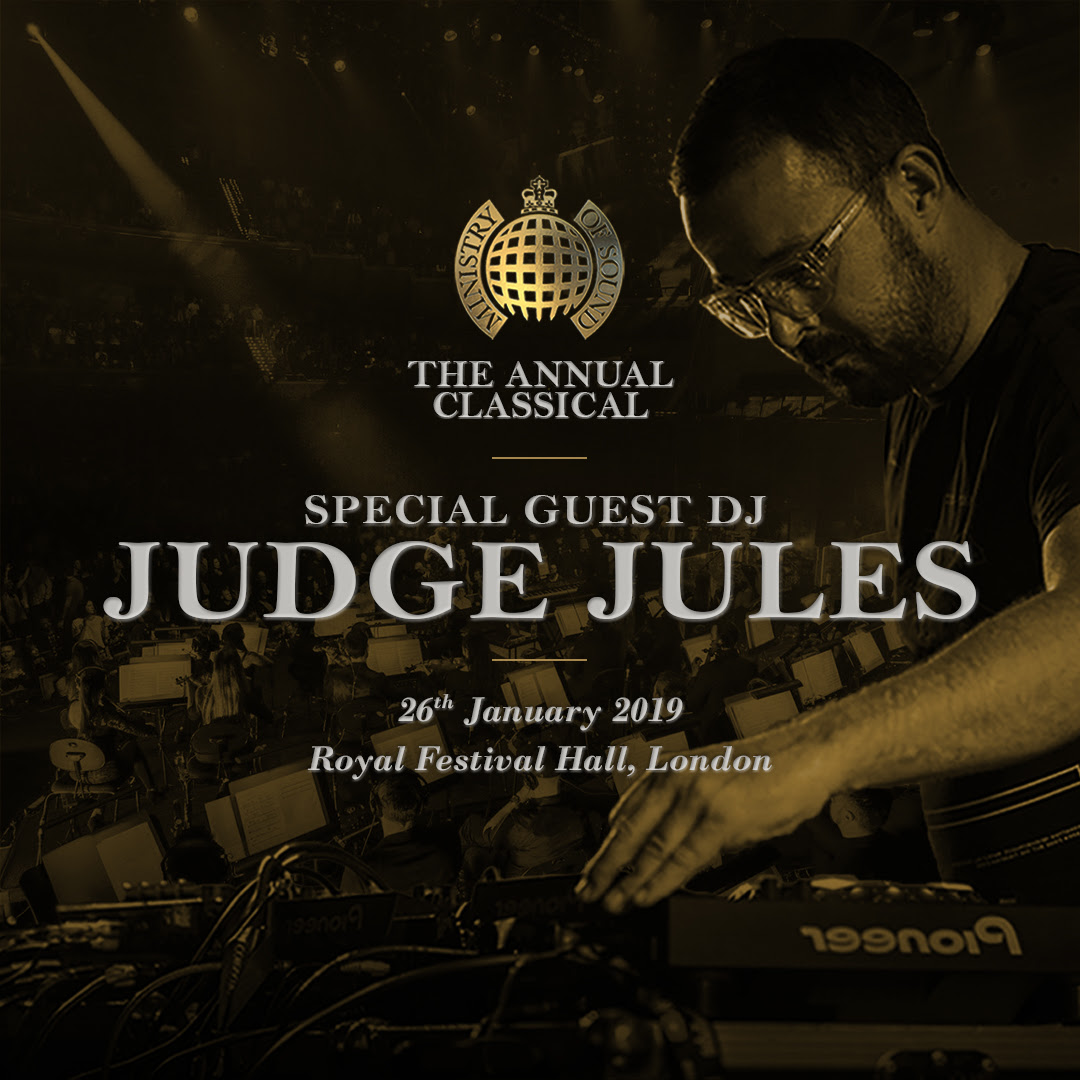 World-renowned dance music innovator Judge Jules has been announced as a special guest DJ for the world premiere of Ministry of Sound’s The Annual Classical at the Royal Festival Hall, London on January 26th.

Regarding his forthcoming appearance at the London premiere Judge Jules says,“The Ministry of Sound has always been one of the most iconic brands in dance music and its legendary London venue has played an important part throughout my career. To be asked by Ministry of Sound to curate and perform at The Annual Classical orchestral show in London’s Royal Festival Hall is a real honour.”

Having been at the forefront of The Annual series, Judge Jules has been an imperative part of the composition of the orchestral reinterpretations of the classic dance tunes that will be heard on the tour.

Speaking about his role in the recreation of the music Judge Jules says,“The Annual series have always been snapshots of the scene. With such a rich history in music to choose from, ensuring we were able to represent all the important moments in dance music over nearly three decades was a big task. But we’ve gone and created something truly memorable. The experience of listening to a live orchestra is on another level anyway, and to be able to fuse that feeling with the music of a lifetime promises a very special night.”

23 years on from the debut compilation release, Ministry of Sound will be taking out a 50-piece classical orchestra across the country. Following the world premiere at the Royal Festival Hall, a full six-date UK tour starts in May 2019, calling at major cities across the country.

A special documentary celebrating Ministry of Sound’s The Annual has also been made, which will be screened exclusively at The Annual Classical shows across the UK.

The documentary explores the history of The Annual, the club and features never before seen footage. It features interviews with the DJs who launched their careers at the club and became Ministry of Sound legends, including the likes of Judge Jules, Paul Oakenfold, Todd Terry and Brandon Block, alongside the key Ministry of Sound players including co-founder Justin Berkmann and chairman Lohan Presencer.

The Annual Classical premiere will be a stone’s throw from the Elephant & Castle home of the Ministry of Sound nightclub at the Royal Festival Hall on London’s Southbank and will feature the London Concert Orchestra.

Recognising the cultural significance of the tour, Classic FM has been announced as media partner, which sees the UK’s most popular classical music station team up with The Annual Classical for this classical crossover project. Classic FM will be promoting the orchestral tour to its 5.2 million weekly listeners on air, online and on social media.

Tickets for The Annual Classical are available now from Ministry Of Sound also viaSeeTickets, Ticketmaster, TicketCo and Southbank Centre ranging from £22.50 through to £70.

The Annual Classical is a co-promotion between Coalition Agency and Raymond Gubbay Ltd, by arrangement with Ministry of Sound.