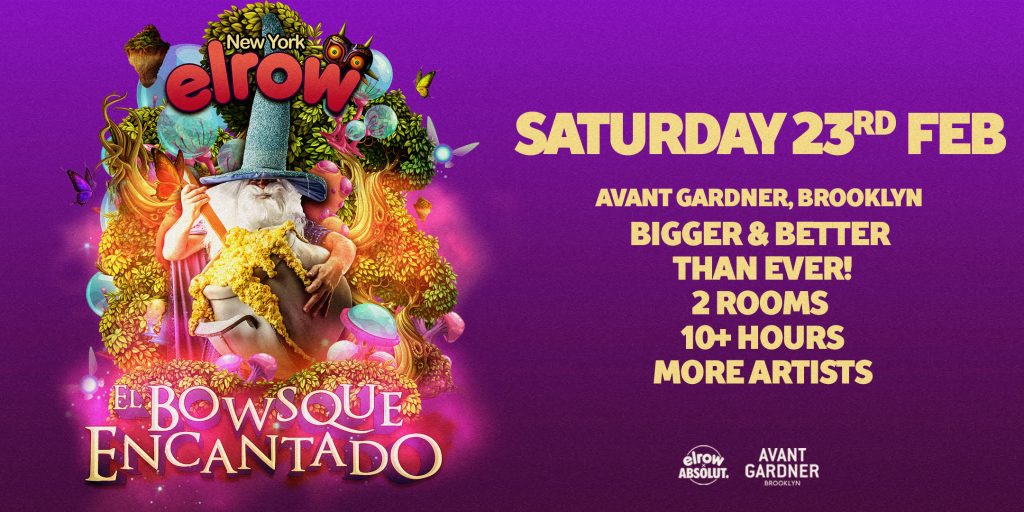 Thirteen DJs From Around the Globe
Revealed for elrow’s Biggest North American Indoor Festival To Date:
10 hours of Spectacle in Two Massive Rooms
From 7:30pm until dawn at Avant Gardner 2.23
Following the announcement of “El Bowsque Encantado” as the theme for the launch of its 2019 NYC residency on February 23 at Avant Gardner, elrow reveals the full lineup for its biggest indoor fiesta in North America. Providing the soundtrack to this edition of the world’s wildest immersive party experience will be Paco Osuna, Victor Calderone, Audiojack, Bastian Bux, Charles Meyer, Detlef, Joeski, Mathias Kaden, special guest Matthias Tanzmann, Miss Jennifer, Sante, Toni Varga, and Westend. The spectacular roster of 13 DJ superstars will throw down transcendent house and techno sets in two rooms for more than ten hours, making this one of elrow’s largest, longest, and most unforgettable events to date. Representing Spain, Germany, Greece, the UK, and the US, the international lineup is a direct reflection of elrow’s global aesthetic that attracts hedonistic revelers from all ends of the earth to its one-of-a-kind extravaganzas.
Watch the trailer here:
Featuring madcap theatrical and aerial performances amidst exuberant decorations and outlandish costumes, “El Bowsque Encantado” will transport party-goers into an enchanted forest. In this otherworldly dimension, the wildest parts of your subconscious are brought to life, rendering you giddy and delirious. Attendees will interact with magical exotic creatures and mysterious beasts that roam the mystical surroundings where a myriad of pixies, fairies and elves will be riding sunbeams through the dense foliage of the trees and giant toadstools. Unicorns fleetingly emerge from the dappled shade as butterflies float from one brightly coloured blossom to another in a parallel universe.
Fueled by a gathering of the city’s most colorful characters united in the spirit of going on an adventure, transcending race, gender, nationality, politics, and musical genres, elrow lends an opportunity for New Yorkers of all kinds to come together, abandon their inhibitions, discover new experiences, and get lost in magical moments.  elrow  stands as a testament to the the idea of what nightclubbing and city life can be.
elrow is about the experience. It’s theatre, art, music, performance, fashion and what makes it so very special is that the audience is part of the experiential, theatrical ongoing show.  Curated as immersive events, elrow gatherings are more than parties — they’re multisensory bacchanals. Simply stated, there are no wallflowers at elrow.
To ensure early birds and night owls alike can join in the interactive festivitie, doors will be opening as early as 7.30PM.
—
2018 saw elrow broaden its worldwide domination, with events taking place in over 80 cities on six continents. Since its 2016 debut in NYC, elrow has steadily expanded its footprint in the United States. This special winter edition follows three sold-out gatherings at New York’s Avant Gardner, their previous 10 hour open-air music extravaganza at Brooklyn Mirage, their Las Vegas Art of The Wild October weekend takeover at The Wynn, and their Art Basel debut in Miami.
More about elrow:
Watch the elrow historical documentary HERE.
Watch the making of the elrow performances and decors HERE.
elrow is the world’s leading event production company with six generations of experience promoting unforgettable spectacles. Performers interact with guests, who become actors in the story, integrated into a psychedelic circus-like environment and vibrant atmosphere unlike any other. Hailed as “one of the most successful and outlandish party brands around the world” by Billboard and boasting over 250 events to its credit, elrow is a global phenomenon that can run five events simultaneously and is used to selling out as many as 15,000 tickets in under four hours even before lineups are announced. elrow events take place in over 80 cities on six continents, including residencies in Ibiza, Dubai, Capetown, New York and Barcelona, and stages at major festivals including Glastonbury and Tomorrowland. In 2018 alone, elrow hosted over 40 sold out events around the globe.
Their recipe for success is conveniently summarized as ‘25% music, 25% the performers, 25% the decoration and 25% the crowd’. Fans follow elrow loyally around the planet, confident they’re part of a magical experience, determined to seize a place in the realm of memorable parties that channel royalty’s most outrageous extravaganzas.
“The Medicis of raving”
– THE GUARDIAN
“The Party Taking Over The World… over a decade later, the brand is one of fastest-growing – and popular – parties in the world.”
-ELLE
:One of the most successful and outlandish party brands around the world.”
– BILLBOARD
“Arguably the world’s most popular clubbing brand.”
– RESIDENT ADVISOR
FOLLOW elrow
WEBSITE | INSTAGRAM | FACEBOOK | TWITTER