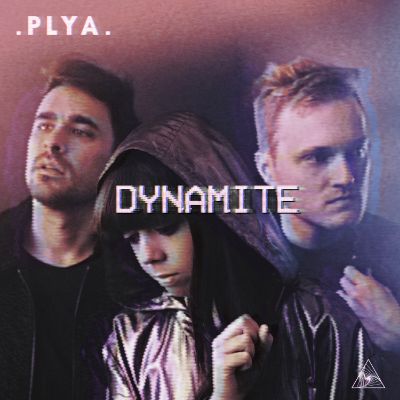 NEW EP OUT NEXT MONTH

Alt-pop, electronic trio PLYA have shared their new single ‘Dynamite’. Explosive, intense and cinematic, the track builds from the start with dark, dreamy melodies and powerful dynamics which are hypnotic, submerging you deep into their alluring soundscape.

“’Dynamite’ is about that fiery relationship you know isn’t good for your health but you just can’t get enough of” explains vocalist Julia Sykes, “That internal battle of whether this person is ruining your life or completing it.”

Based in London, PLYA’s sound draws in the stylish elements of the city and marries it together with the exoticism of Europe and the glamour of Los Angeles. These multinational influences arise from vocalist Julia Sykes’ upbringing and echo through their music, which combines electronica, edgy pop hooks and grit.

Just over a year since conception and PLYA are proving an exciting prospect. Since debuting with their track ‘Thinking Of You’ and its striking movie quality video, PLYA were named BBC London’s ‘BBC Introducing featured artist’ in April 2018 and had their Hype Machine Top 10 single ‘Feast My Eye’ hand-selected by Sir Elton John for his Apple Music Beats 1 Radio show.

They sold out their debut headline show at London’s Camden Assembly and went on to support the likes of Grammy nominated artist K.Flay, R.LUM.R, The Aces and The Night Game in the UK and Europe. They also joined the bill of upcoming talent at The Great Escape Festival 2018 and appeared at the sold-out three-day festival O Son do Camino in Spain.

Ending 2018 on a high, PLYA shared ‘Innocent’ and ‘Addiction’ simultaneously before teaming up with underground Italian label Manifesto to release their previous single‘Adrenaline’. The track instantly started making traction online, gaining over 1million steams on Spotify in a few weeks.

The band are now ready to release the next wave of new music with ‘Dynamite’ leading the way for an EP to come in March. The three-piece will also be headlining London’s Thousand Island on February 28th, tickets available here.

“PLYA have us enraptured, a group able to cast a spell, uniting striking
electronics with dreamy pop aspects… A glossy, glamorous sound with just a
hint of grit” – CLASH