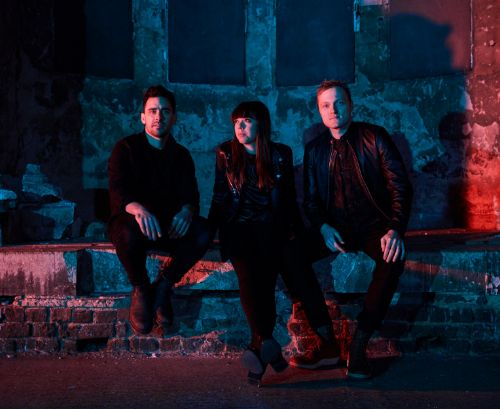 TAKEN FROM THE UPCOMING EP
STILL IN LOVE
OUT THIS SUMMER

Alternative electronic-pop trio PLYA have shared the striking video for their new single‘Dynamite’, which is the first track taken from their upcoming four-track EP Still in Love.

Filmed in a derelict church building in London, the video is dramatic and powerful, featuring a cinematic performance from the band, surrounded by electric colours that ignite the darkness and accentuate the pulsing intensity and dreamy aura of the track.

Addressing themes of addiction, lust and loving something toxic, Julia’s crystalline vocals come with a bite, immersed in an atmospheric wave of synths, rhythmic drums courtesy of drummer Will and Kristian’s melodic guitar and bass lines.

“We wanted to capture the dark element in ‘Dynamite’ in a raw, honest, energetic performance”, explains Julia. ”We filmed it in a beautifully flawed and imperfect church in South London which we felt really captivated the emotion of the song.”

It comes after the release of the sensual hit ‘Adrenaline’, which was picked up by Italian label Manifesto and has had over 1.4million streams on Spotify since December.

Based in London, PLYA’s sound captures the essence of the city and marries it together with the exoticism of Europe and the glamour of Los Angeles. These multinational influences arise from vocalist Julia Sykes’ upbringing and has seen the band flourish in the UK and Europe. It’s a stylish sound that will energise festivals, ignite clubs and provide a soundtrack to the summer.

Following previous musical endeavours, PLYA debuted with their track ‘Thinking Of You’and its movie-like quality video, and garnered support from BBC London who made them their ‘BBC Introducing Featured Artist’, and has excited tastemakers such as Q, NME and Clash Magazine.

Their Hype Machine Top 10 single ‘Feast My Eye’ was hand-selected by Sir Elton John for his Apple Music Beats 1 Radio show and was followed by the lustrous double release of‘Innocent’ and ‘Addition’, which have firmly placed PLYA as a band to watch.

They sold out their debut headline show at London’s Camden Assembly in 2018 and went on to support the likes of Grammy nominated artist K.Flay, R.LUM.R, The Aces and The Night Game in the UK and Europe. They also joined the bill of upcoming talent at The Great Escape Festival 2018 and appeared at the sold-out three-day festival O Son do Camino in Spain.

Last month they again played a triumphant headline show at London’s Thousand Island and will have more to follow through the rest of the year.