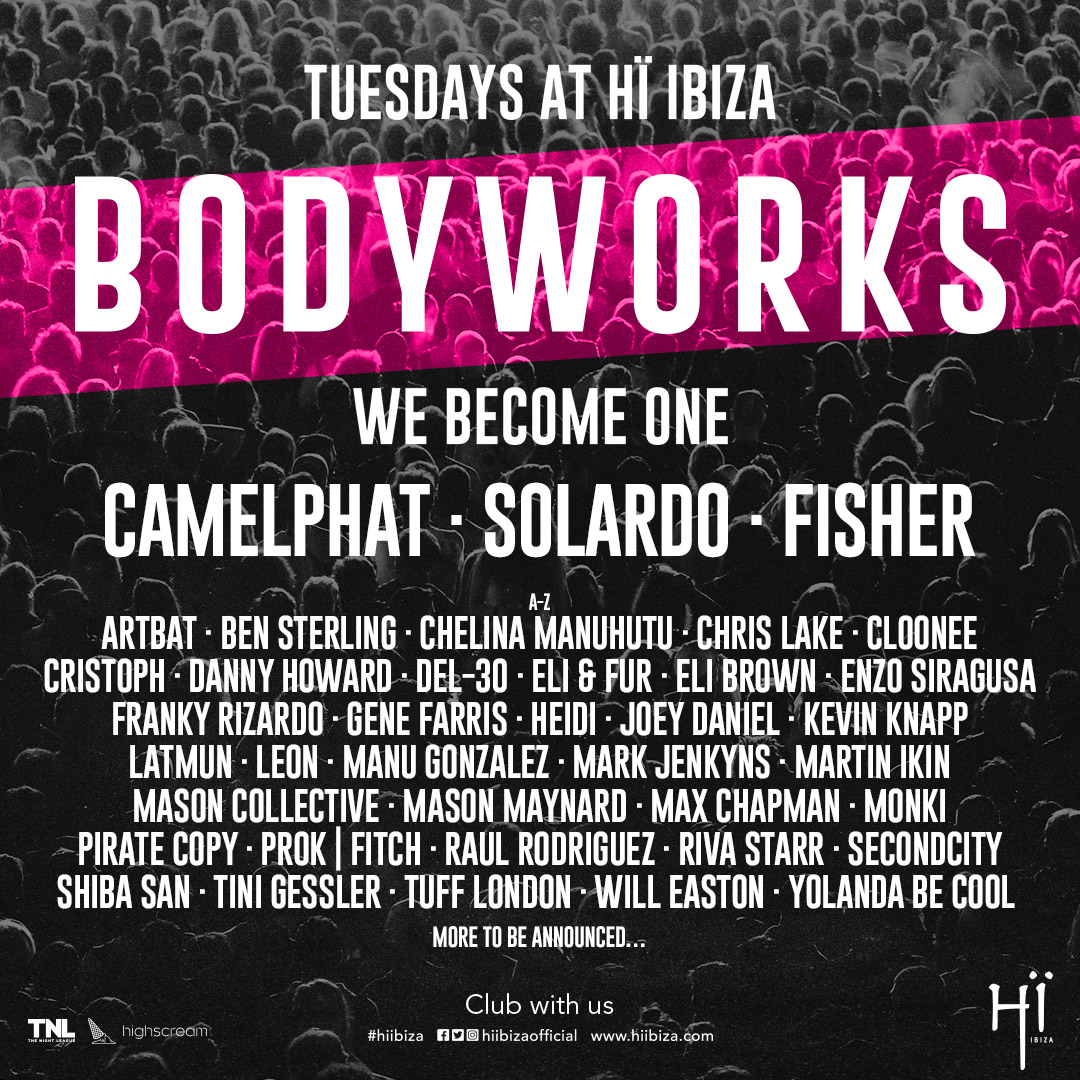 The season line-up for Hï Ibiza’s newest and most highly anticipated residency, BODYWORKS, is revealed today. The groundbreaking new residency for 2019, brings three giants of the underground together with CamelPhat, Solardo and Fisher taking control as Hï Ibiza residents every Tuesday from 25 June – 24 September. The night has curated a breathtaking line-up of the biggest acts from the underground electronic music scene including Heidi, Enzo Siragusa, Eli & Fur, Riva Starr, Mason Maynard, Secondcity, Monki, Franky Rizardo, Artbat and many more to ensure their brand new residency goes off with a bang.

Having rocked Hï Ibiza last year supporting Eric Prydz, chart-topping UK production duo CamelPhat and Manchester house and techno duo Solardo have become hot property and due to popular demand will return for another spectacular season. They will step up to host the Theatre (Room 1) for BODYWORKS, and will be joined across the season by the likes of former Radio 1 Jackathon queen Heidi, UK chart-topping house star Secondcity who will bring a pan-Atlantic style, and breakout tech talents Latmun and Christoph from labels like MadTech, Elrow and Last Night on Earth.

July will see Ukrainian pair Artbat who are never far from the Beatport Top 10  step up to the plate, along with Dutch-born Ibiza based producer and DJ Chelina Manuhutu. August will see Solardo-backed youngster Mason Maynard again serve up his scintillating take on house not once but twice, plus  ABODE’s acclaimed resident Max Chapman and the always playful and inventive Snatch! boss Riva Starr. September brings Radio 1’s Nothing Else Matter chief Danny Howard, a party-starting back-to-back from Leon and Joey Daniel and melodic house excellence from Christoph before a huge closing party with FUSE founder and dub-tech pioneer Enzo Siragusa.
DJ of the moment, FISHER is poised to celebrate his debut Ibiza residency by hosting the Club (Room 2) and will call on some of the most exciting names in the underground electronic music scene to join in each week. These include a contemporary selection of tech house’s finest names like Eli & Fur, Tini Gessler, Mason Maynard and Martin Ilkin as well as long time and always evolving house mainstays Riva Starr and Pirate Copy. For edgy house Frenchman Shiba San is the man, Defected’s slick studio man and assured DJ Franky Rizardo will get you in the groove and keep you there and Chicago pioneer Gene Farris will keep it raw and jacking when he plays. Other guests in Club include the hugely popular Danny Howard, veterans Yoland Be Cool and always energetic Prok & Fitch duo as well as a special back-to-back between Mason Maynard and Ben Stirling.

BODYWORKS promises an incredible musical journey towards oneness from the night to the morning,  like cogs moving seamlessly together in a machine. Where the beats of the DJs and the drumbeat power the dancefloor as bodies move together as one and the crowd converges to one rhythm.

Prepare to lose yourself along the way as CamelPhat, Solardo and FISHER together with some of the most cutting edge names in underground house and techno treat you to a party like no other.

Tickets are on sale now available from 20€.