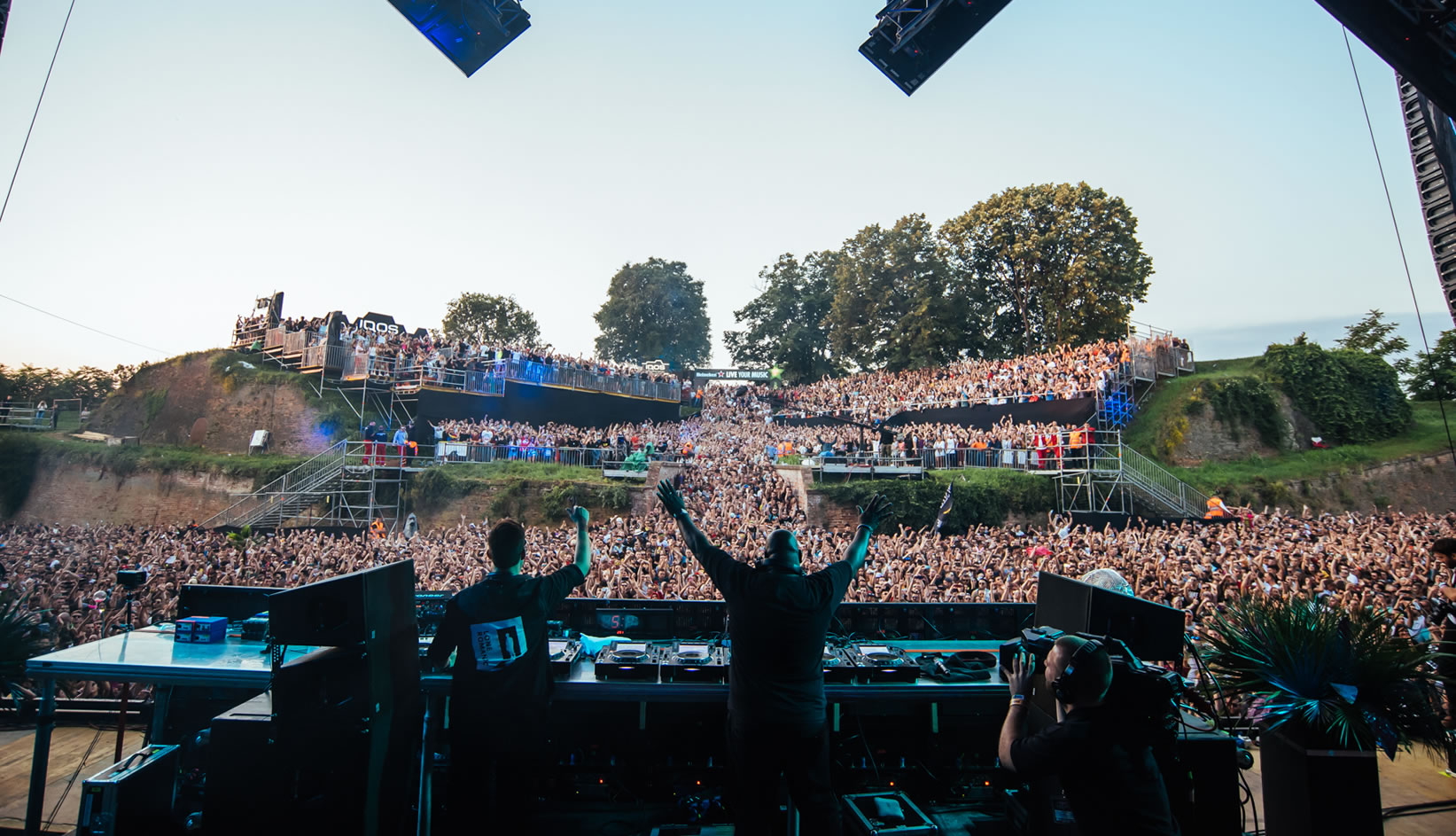 EXIT, one of the world’s leading music festivals over the past two decades, closed its gates on Monday morning after another spectacular sunrise at its globally praised mts Dance Arena stage! Ahead of next year’s 20th anniversary, this year’s edition saw the already massive Serbian festival reach new historic peaks on many different points, breaking its daily attendance record from the very start on Thursday and concluding with over 200,000 music lovers from more than 90 countries who entered the festival gates over four days and nights. Featuring diverse lineups spread over 20 different stages and 20 additional zones in the colossal 18th century Petrovaradin fortress, EXIT takes place on a rock looking over the Danube to the charming city of Novi Sad.
Some of the world’s leading music stars added to the overall experience including The Cure, Greta Van Fleet, The Chainsmokers, Carl Cox, Skepta, Amelie Lens, Paul Kalkbrenner, Dimitri Vegas & Like Mike, Solomun, Tom Walker, IAMDDB, Jeff Mills, Chase & Status, Desiigner, Maceo Plex, LostFrequencies and hundreds of others. As one of very few major festivals that was born from the social activism, EXIT once again welcomed the activists from the Standing Rock tribe who fight for preservation of life on Earth and gave a very powerful speech at the opening ceremony. The festival also featured video messages from Yoko Ono and the world’s best tennis player, Novak Djokovic, who launched a long-term cooperation between his and EXIT’s foundation for developing pre-school education in Serbia.
EXIT Festival 2019 – The Official Aftermovie:
The opening day was officially branded as OPENS Day, an abbreviation from the “Omladinska Prestonica Evrope Novi Sad”, that translates from the EU title of the European Youth Capital which the EXIT team initiated in its own hometown. It was the festival’s biggest day too, with 56,000 visitors setting a new daily attendance record, while the full-blooded concert of The Cure, the band that lead the bill of almost all major festivals this year, lifted the energy high for what will turn out to be the best EXIT so far. The iconic DJ Carl Cox, both in his own solo set and in the rare back2back with Maceo Plex had theDance Arena packed with 25,000 dancers and lead them for hours through night and sunrise, well into the hot sunny morning until the 8am! The smoking hot Friday night saw the leading world hitmakers, The Chainsmokers put on a delirious show, followed by drum and bass icons, Chase & Status, and preceded by the legendary frontman of Pantera, Phil Anselmo. The Dance Arena then welcomed Berlin’s finest electronic superstar Paul Kalkbrenner, the equally popular German producer Boris Brejcha and the Korean house star, Peggy Gou.
The Saturday night fever justified the euphoria regarding the most talked about band, who many see as the saviours of rock music, Greta Van Fleet, as well as a flawless show by the risingly popular Tom Walker. At the Arena, the dance continued with a 6-hour long rhapsody by charismatic Ibiza boss Solomun who brought his famous “Solomun +1” party to Exit, featuring another EXIT’s regulars as his guests, the Italian duo, Tale of Us! The explosive finale over at Main Stage had Skepta delivering rhymes from his new masterful new album, the energetic trap hero Desiigner and the new trap-jazz diva, IAMDDB, while the spectacular show by world no.1 DJ duo Dimitri Vegas & Like Mike had people going wild with their high-energy show full of pyrotechnics and special effects.
On the last day at the Arena, the legendary Detroit virtuoso Jeff Mills and one of the leading DJs of the next generation, Dax J, delivered some of the finest techno from a 60-meter wide stage filled with the latest tech and LED screens that stand at an impressive 3,000 square feet! The honor of closing the mts Dance Arena and the whole festival this year went to the global and universally loved techno hero Amelie Lens, who got her first ovations with thousands chanting her name as soon as she stepped on the stage! After two hours and the first 20-minute long encore, knowing about the strong relation between EXIT and the electronic giants The Prodigy, the Belgium superstar closed the festival with “Firestarter” honoring the late Keith Flint and celebrating life with 25,000 ravers that stayed until the very end at 8:30 in the Monday morning.
EXIT 2019 was a perfect intro to the big celebration set for the next year, called EXIT 2.0, that will mark 20th anniversary of the world–renowned Serbian festival.
www.exitfest.org
https://www.facebook.com/exit.festival/
https://www.instagram.com/exitfestival/?hl=en