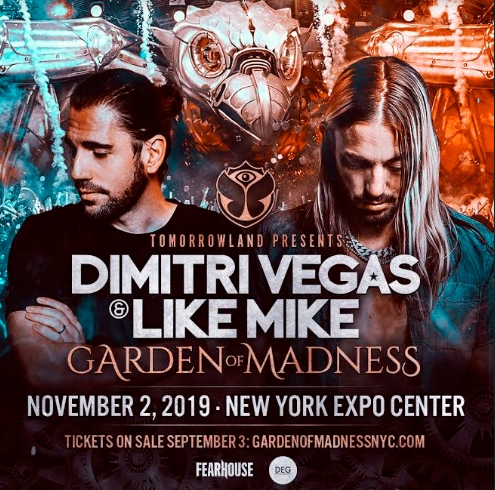 Dimitri Vegas & Like Mike, in partnership with Tomorrowland, bring their famed Garden of Madness spectacle to the United States for an exclusive one-off show at The New York Expo Center (1110 Oak Point Ave, Bronx, NY) on Saturday, November 2.  Co-produced with DEG Presents & Fearhouse NYC, this debut U.S. edition of Garden of Madness will be the Belgian brothers only event of its type in the country in 2019. Additional special guests to be announced in the coming weeks.
Tickets are on sale now at: https://gardenofmadness.eventbrite.com/?aff=pr
Over the past six years brothers Dimitri Vegas & Like Mike have carved themselves into the history of electronic music with show-after-show of jaw dropping stage presence and performances. Launched back in 2016, and formerly known as Bringing The Madness, the duo’s end of year Garden of Madness homecoming extravaganza has become something of a must-do event in the December clubbing calendar for hundreds of thousands of fans from around the world. For 2019 the brothers will be back with Tomorrowland Presents Garden of Madness.  Expect mammoth sized shenanigans with the levels of insanity turned up to gargantuan.
Says Dmitri Vegas, “It’s been amazing building this brand over the past six years together with Tomorrowland to now further expand all over the world is a dream come true.”
“It’s really exciting to be working with Nick and the Tomorrowland team.  They’re absolute professionals. New York City is in for a real treat on Halloween weekend,” adds DEG Presents President Eddie Dean.
A long-established concept that has been an integral part of Tomorrowland festival since 2014, Garden of Madness has also had three triumphant seasons at Ushuaia Ibiza with its weekly Tuesday residency. Following what has been a wildly successful period in Tomorrowland and Garden of Madness history, which has seen both brands collaborate to celebrate the Tomorrowland festivals 15 years, the entire team behind both events want to close 2019 in the most mind-blowing way possible. With that in mind, every aspect of the Garden of Madness concept’s detail and curation are being meticulously reviewed and redesigned to ensure that each arena show goes above and beyond any and all expectations.
After the U.S. show, the production team behind Tomorrowland will cross the Atlantic landing in Liverpool for a special show at the Steel Yard on December 7. In partnership with Creamfields and taking charge of one of the festivals most iconic and respectable stages in the Steel Yard, Dimitri Vegas & Like Mike will bring a bigger and bolder show than ever seen before. The tour will then conclude at the Sportpaleis Antwerp arena on December 20 and 21 in what is set to be an unmissable show aligned with a string of special guests and numerous eye-opening surprises.
Devotees of the Garden of Madness mantra can still expect Amare (the much-loved eagle) to be a central fixture at all shows. So please, join us to close the chapter on 2019 and celebrate another year of crazy parties as Tomorrowland Presents Garden of Madness 2019
ABOUT DEAN ENTERTAINMENT GROUP (DEG)
Dean Entertainment Group (formerly “RPM Presents”) is New York’s leading independent full-service music event, marketing, and promotion platform founded by music and nightlife impresario Eddie Dean, former owner of Pacha NYC with over 30 years of trusted experience in entertainment, nightlife, culture and events.
As the experiential arm of The Dean Group, DEG offers both large and small-scale production services and delivers unprecedented immersive music experiences to diverse audiences, ranging from intimate private shows and soirees at the most sought-after clubs around NYC to 100,000-person multi-day music festivals.
ABOUT FEARHOUSE NYC
Since the launch of Pier of Fear in 2012, DEG Presents has continuously curated the best and the largest Halloween event in New York City. 2017 marked its 5-year anniversary, evolving into ‘Fearhouse’. The newly-minted Halloween event series takes place at several warehouses spanning New York City. Last year featured a diverse line up spanning Travis Scott & Virgil Abloh to Dimitri Vegas & Like Mike.
Advertising