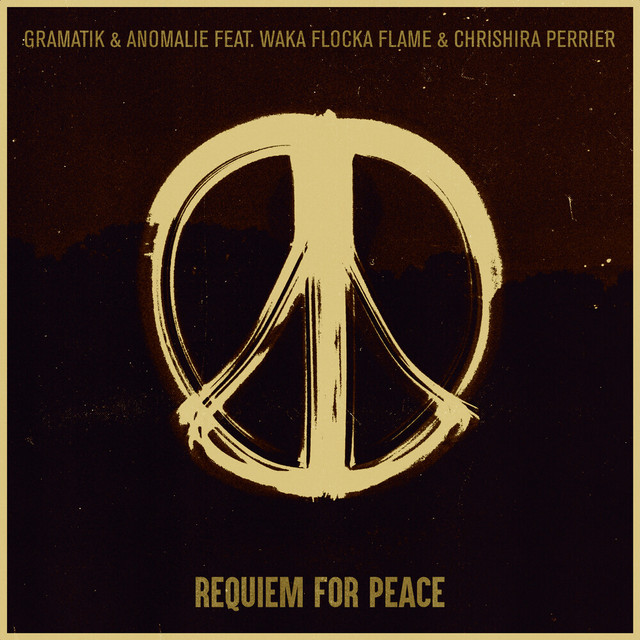 With the year now coming to a close, Gramatik is revealing he has a few more surprises for fans still in the works, most notably the upcoming release of a new album titled ‘Re:Coil, Pt. II.‘ The follow up LP to the critically acclaimed ‘Re:Coil, Pt. I,” Pt. II will contain eight singles including his already released collaboration with Big Gigantic on “Better Believe It Now,” with Kotek on “Vitalik Buterin,” and his ode to his New York State home’s road to the legalization of marijuana titled “Puff Your Cares Away.”

Today, ahead of the full project’s October 25th release, we’re getting our next glimpse into the album with a new single with frequent collaborator Anomalie titled  “Requiem For Peace.” Capturing the essence of the glitch, hip-hop, and instrumental fusion that Gramatik is celebrated for, “Requiem For Peace” additionally features a top-line from rapper Waka Flocka Flame and choruses performed by vocalist Chrishira Perrier. As for how the track came to be, Gramatik explains:

“Anomalie and I first made “Requiem For Peace” as an instrumental when I was recovering from a broken ankle and fibula in 2016. It was very difficult for me to work on music at the time and I was feeling very uninspired. When Anomalie sent me the chord progression, I was so mesmerized by it that I had to work on it, even through the pain.

The song was sitting on my desktop in instrumental form for a while until I met Waka at a festival we played together. We hung out and hit it off right away. When I got home I immediately sent him the instrumental and he sent me two verses which perfectly fit the vibe of the song. We knew we needed a strong hook, so I reached out to my good friend Andrew Block, who used to play guitar on my shows, and he suggested Chrishira. Sure enough, she wrote a magnificent hook that tied the song together in an epic way. It’s a very personal song for me and I’m curious to see if other people see the magic in it too. Super excited it’s finally time to release it!”

Still to come on ‘Re:Coil, Pt.II,’ the track-list also feature unreleased  collaborations with Ryan Shaw & ProbCause on “We Don’t Give Up Now,” with Beat Fatigue on “Don’t Mind It,” with DeFunk on “Funk It VIP,” and with Luxas on “Saturnia.” The project will be released via Gramatik’s own label  Lowtemp.
If this is your first introduction to Gramatik, real name Denis Jašarević, he has released eleven albums, four EPs, numerous original scores, singles, and remixes all for free. In 2013, he established his label, Lowtemp, allowing him to further realize his idea of music being a free medium. Following his long history of file sharing with his music, Gramatik released his entire discography in partnership with BitTorrent. With the aid of blockchain technology, in 2017 Gramatik became the first artist in history to tokenize himself with the GRMTK  crypto currency, thus creating a new model for content creation on an unrestricted platform and revolutionizing the artist-fan relationship.
Up next for Gramatik in addition to the release of ‘Re:Coil, Pt.II,’ he will also be hitting the road in support of the release with a North American tour kicking off at HARD Red Rocks on October 25th. He will then continue on to cities including Los Angeles, Chicago, Brooklyn, Philadelphia, and more through November 23rd. Find a full list of tour dates and tickets below:
‘RE:COIL, PT.II’ TOUR DATES
10/30 – San Diego, CA – The Observatory
10/31 – Los Angeles, CA – The Novo
11/01 – Oakland, CA – The Fox Theater
11/02 – Reno, NV – Cargo
11/06 – Portland, OR – Roseland Theater
11/07 – Eugene, OR – McDonald Theater
11/08 – Seattle, WA – Showbox SoDo
11/09 – Spokane, WA – Knitting Factory
11/14 – Minneapolis, MN – Skyway Theater
11/15 – Madison, WI – Majestic Theater
11/16 – Chicago, IL – Riviera Theater
11/17 – Grand Rapids, MI – Intersection
11/20 – Pittsburgh, PA – Stage AE
11/21 – Boston, MA – House of Blues
11/22 – Philadelphia, PA – The Fillmore
11/23 – Brooklyn, NY – Avant Gardner
TICKETS
Advertising