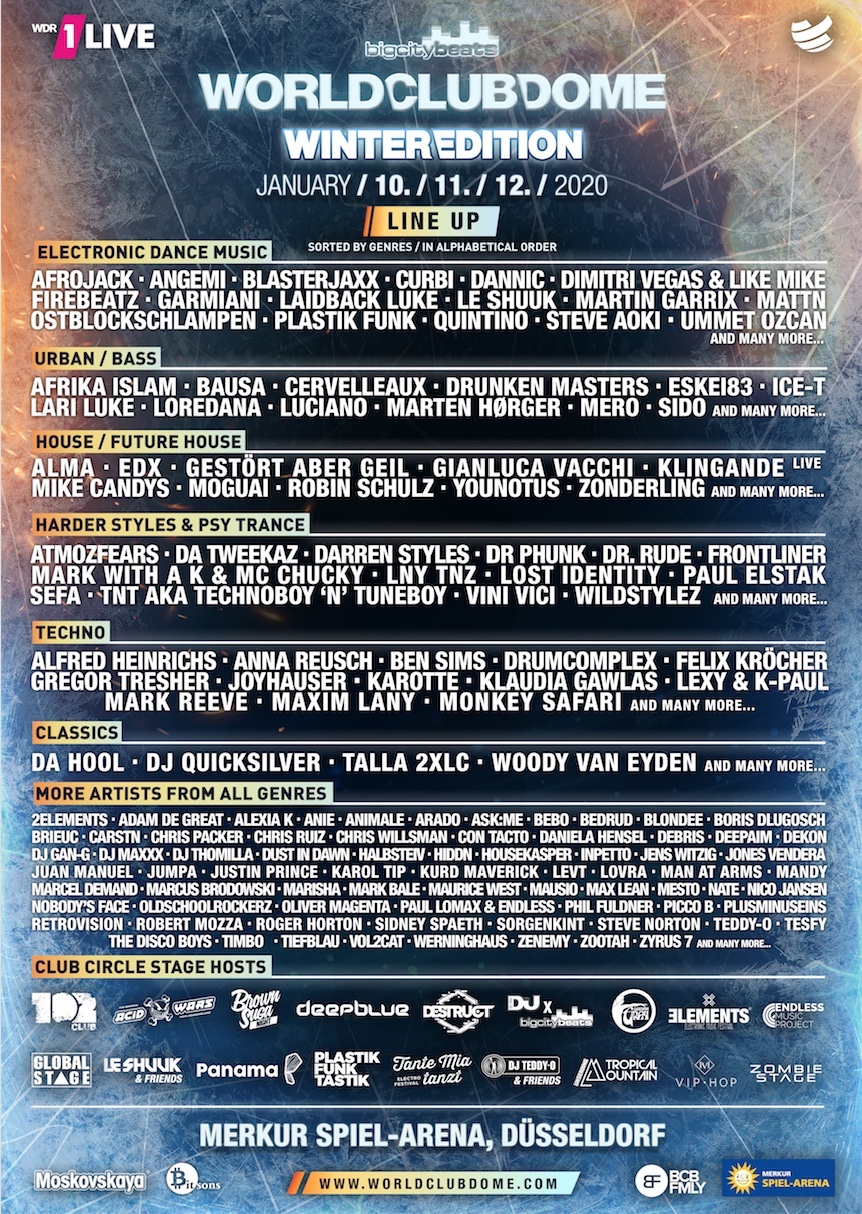 BigCityBeats’ WORLD CLUB DOME is returning with its Winter Edition on January 10th– 12th, with a lineup that is bigger and more varied than ever before. Returning to the Merkur Spiel Arena in Düsseldorf for the second year running, and with 90,000 party-goers in attendance last year, the second edition is the first major event in next year’s dance music calendar.

Setting the bar sky high with the initial waves of artist announcements, which included Martin Garrix, Dimitri Vegas & Like Mike, Robin Schulz, Steve Aoki, Moguai and Gianluca Vacchi – the revolutionary events company have now added a mind-boggling list of DJs, both old and new, set to join some of the 20 club stages that span the indoor festival.

Electronic dance music extraordinaires Afrojack and Laidback Luke are some of the first major electronic stars to be added to the bill. Both come with vast commercial success and extraordinary live shows that will see them dominate the main stage with sets that aren’t to be missed.

Not only will these stages host every variety of electronic music under the sun, but a scintillating range of other genres will also be on offer. A world first, the Winter Edition will play host to the biggest Hip Hop takeover ever witnessed at a dance music festival. Taking the helm, legendary rapper Ice-T will be making a hugely anticipated appearance, joined by Hip Hop pioneer Afrika Islam, and homegrown talent Luciano, Sido and Bausa are just some of the great Urban and Bass artists gracing the festival.

House giants Alma and Zonderling will be leading a lineup of House and Future House DJs to cater to all your electronic needs, which also includes Swiss DJ and Grammy-nominated producer EDX. Techno DJs Ben Sims, Drumcomplex and Joyhauser are some of the names announced from the tech contingent.

Stages catering to Hardstyle and Psytrance will be wowing audiences all weekend. Lost Identity, Vini Vici, Wildstylez and Sefa are just a handful of the brilliant talent playing on these stages. Other legendary DJs, Da Hool and DJ Quicksilver will be spinning classics from their collection, while a host of other artists ranging in style and genre can be heard across the three days, including Mausio, Ask:Me and Dj Teddy-O.

With one of the most diverse lineups on offer, BigCityBeats are asserting their monumental success and party acumen, which has enabled them to book some of the most sought-after acts in the music industry. Attracting tens of thousands of party-goers worldwide to their shows, the Winter Edition is on track to be one of the biggest parties on the planet. Get your tickets now.