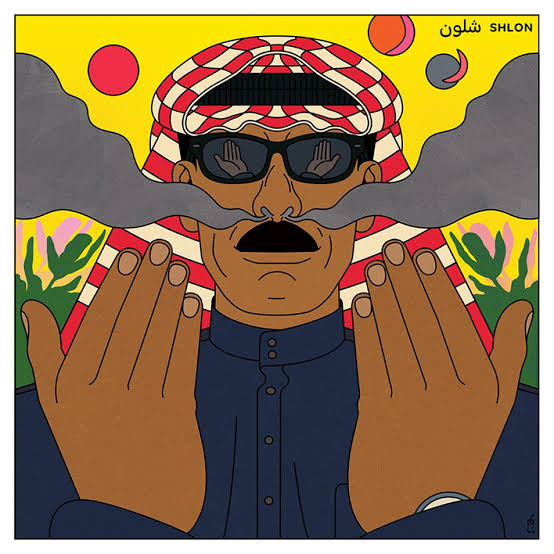 Syrian wedding singer turned global dance icon Omar Souleyman is gearing up to release his fourth studio album Shlon, due out November 22 via Mad Decent / Because Music. Today, Omar shares the album’s second single “Shi Tridin.” Translating to “What Do You Wish For?”, Omar Souleyman delivers passionate love poetry over a high energy fusion of techno and dabke music, singing of a lover ready to offer his beloved anything she wishes under the sun on “Shi Tridin.”

On Shlon (Arabic for “how,” or literally “which color”), Omar Souleyman presents 6 new techno-meets-dabke songs of romance and love — singing poetry of a woman’s lips as sweet as Hillah’s dates on lead single “Layle”; an intriguing woman he watches from afar whose kiss would be worth 10 million other kisses on “Shlon”; a man in admiration of a woman with green eyes and blonde hair on “Abou Zlilif” (“Her Face is Like The Moon”); a song about love that will last forever on “Mawwal”, a traditional — all superimposed on complex techno arrangements by Hasan Alo, and based on the hi-speed Kurdish and Arabic dabke and baladi styles with the exception of “Mawwal” being presented in its traditionally slower pace.

Shlon features double keyboard work from Hasan Alo, a fellow native of the Hasaka region in Northeastern Syria who has recently been active in the vibrant nightlife scene of Dubai. Azad Salih, a young Syrian man currently living in Mardin, Turkey, accompanies on saz, with the lyrics and love poetry written on the spot during the album’s recording session by longtime Omar collaborator Moussa Al Mardood – also currently based in Turkey.

Omar Souleyman, who has collaborated with Björk and Four Tet, began his career as a prolific wedding singer, releasing nearly 500 live albums before civil war broke out in his native Syria in 2011. He then moved to Turkey and in 2013 released his Four Tet-produced debut studio album Wenu Wenu via Ribbon/Domino, which NPR called, “…a jam so visceral, thrilling and intense as to make the mysterious matter of earthly borders seem hardly worth the time to contemplate.” His 2015 sophomore album Bahdeni Nami (various producers including Four Tet, Gilles Peterson and Modeselektor) garnered widespread critical praise including The Guardian, who proclaimed “It’s so fast that the only appropriate way to engage with it is to wriggle your limbs. Melodies are both abrasive and ebullient, chattering endlessly like raucous birdsong,” and 2017’s To Syria, With Love via Mad Decent placing Omar firmly in the canon of global electronic music.

Souleyman has bolstered his growing status as a world and electronic music icon establishing an extensive international following after touring widely and performing at major festivals including Glastonbury, Bonnaroo, Pitchfork Paris and Roskilde. Since its founding in 2013, Souleyman has been an advocate for the charity “Our Heart Aches for Syria,” which operates in collaboration with Doctors Without Borders. In that same year, he performed at the Nobel Peace Prize Concert in Norway.

Omar Souleyman has been touring tirelessly since the release of To Syria, With Love, or in fact for as long as he can remember in the last 10 years. He has crossed the planet – now seeming quite small – several times over and looks forward to meeting his fans everywhere to celebrate the release of Shlon.