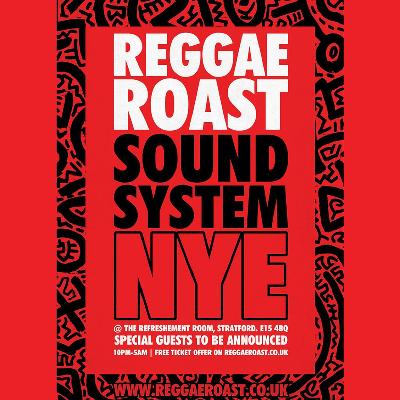 ⚠️ As an extra special treat for all our fans, we’re giving away a limited number of FREE TICKETS via Whatsapp!

Click the link below to get yours now before they all go!

🔊 We will have our world-famous Soundsystem rig as well as the entire Reggae Roast Family spinning tunes and performing on stage throughout the night.

We will also be announcing some special guests in the coming weeks!

This is going to be the perfect way to welcome in the new decade of 2020. We’re really looking forward to this one so come along and celebrate with us!

_______________________________________________
More information on Reggae Roast here
Reggae Roast, one of the UKs leading Reggae Soundsystems & party starters, have forged a reputation as the leading light in the resurgence of the British Reggae, putting on some of the best parties and festival stages across the country. Having recently signed to the world famous Trojan Records they are at the forefront of the UK Reggae and Bass Music scene.
Reggae Roast’s first release on Trojan, went straight in at #1 on the Juno Reggae charts, while getting good radio support from the likes of David Rodigan (1 Xtra) and Ras Kwarme (Capital Xtra) and Don Letts (6 Music), while their follow up single ‘Real Reggae Music’ featuring the legendary Tippa Irie, was included in the Trojan Records 50th Anniversary box set, selling thousands of copies.
2019 will see them pick up were they left off with releases on Trojan Reloaded featuring General Levy, Rankin Joe, Mr Williamz, Burro Banton, Charlie P and many more.
In 2015 Reggae Roast built their own custom Soundsystem pushing the boundaries of soundsystem aesthetics, taking soundsystem design into the 21st century. Their soundsystem remains the cornerstone of their events and with it they have run stages at prestigious festivals such as Glastonbury, Outlook Festival (Croatia), Secret Garden Party, Eastern Electric, Boomtown, Telerama Dub Festival (France) and many more.
At their events they have hosted some of the biggest names in Reggae including Horace Andy, The Wailers, Lee Scratch Perry, Sly and Robbie, Collie Budz, Mad Professor, David Rodigan, Suggs (Madness), Channel One, Trojan Sound, Gappy Ranks, Finley Quaye, Aba Shanti I, Mungo’s Hi Fi and many many more.
Reggae Roast have built a strong fanbase over the years with nearly 200,000 social media followers. They have racked up over 8 million plays on Soundcloud alone and their monthly podcasts receives 10s of thousands of plays. They have played all over the world from India and Thailand to the UK and back. This year they were personally asked by Shy FX and Chase & Status to play at their events.
Reggae Roast are dedicated to bringing reggae and soundsystem culture to a new generation and are steadily building a formidable catalogue of releases and achievements.
WEBSITE – WWW.REGGAEROAST.CO.UK
SOUNDCLOUD – WWW.SOUNDCOUD.COM/REGGAEROAST
FACEBOOK – WWW.FACEBOOK.COM/REGGAEROAST
TWITTER – WWW.TWITTER.COM/REGGAEROAST
INSTAGRAM:  WWW.INSTAGRAM.COM/REGGAEROAST