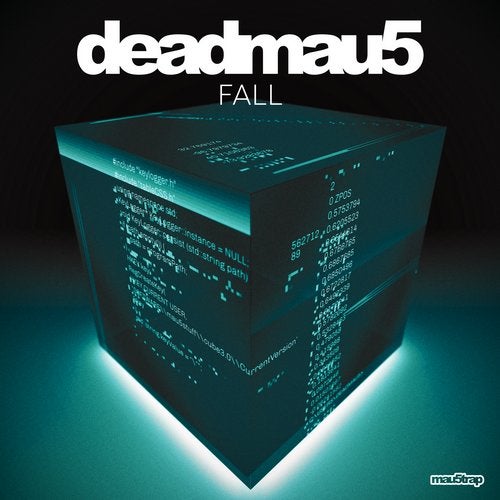 deadmau5
NEW SINGLE “FALL”
–AS FEATURED ON CUBEV3 TOUR—
AVAILABLE NOW ON mau5trap
CUBEV3 TOUR UNDERWAY NOW –
NEXT STOP DECEMBER 7 AT ARMORY IN MINNEAPOLIS
This past Friday, November 29, electronic music producer and performer deadmau5 made available via his label mau5trap another new song from his cubev3 live set with “FALL.”
LISTEN NOW HERE
Like  “COASTED” — which made its online debut on Rolling Stone, accompanied by an exclusive visual from mau5trap content director Leah Sems (@leahsems) —  and “SATRN,” “FALL” is new material featured as part of his new cubev3 show complimenting the most complex production he has ever presented. Each night of the tour, these songs sit within a unique set of his extensive catalogue and fan favorites from “Monophobia,” “Ghosts n Stuff” and “Strobe” to “Raise Your Weapon” and “Drama Free” with vocals by LIGHTS.
The original cube debuted at Coachella April 2010, catapulting deadmau5 to become one of the most in-demand live acts in the world, with its follow-up Cube 2.1 arriving in 2017 at the launch of his “lots of shows in a row tour.”  cubev3 – changing positions from 90 degrees to 45 degrees and rotating 360 degrees—comes to life with mind bending content accompanied by a custom selection of music performed live by deadmau5.
The cubev3 tour continues December 7 at Armory in Minneapolis.  All dates follow below.
More info on the cube along with photos and other assets can be found here.
About deadmau5:
Joel Zimmerman, more commonly known as deadmau5 (pronounced ‘dead mouse’), is one of the world’s most respected electronic music producers of modern times. Enjoying international chart success with his platinum-certified single “Ghosts ‘n’ Stuff,” as well as “Professional Griefers,” “Sofi Needs A Ladder” and “I Remember,” he has also released seven critically acclaimed albums: an orchestral album where’s the drop?, W:/2016ALBUM/ and  > album title goes here < (both reached #1 on the Billboard Dance/Electronic Chart), 4×4=12 (recently recognized for having sold over 1,000,000 copies in the United States), For Lack Of A Better Name, Random Album Title and while(1<2). The multiple JUNO Award-winning and GRAMMY®-nominated artist’s ability to push the boundaries of his talent grows at an equal rate to his fan base, which counts almost 15 million over his combined social media channels. Other music offerings which includes original productions, remixes and collaborations with featured guests like Rob Swire (“Monophobia”), Lights (“Drama Free”), Shotty Horroh, Scene of Action and more can be found on the mau5ville: level 1, 2 & 3 series.  deadmau5 kicked off 2019 with his first ever film score for the Jonas Akerlund-directed spy thriller Polar available worldwide now via Netflix with its soundtrack released on mau5trap.  Most recently his label mau5trap released here’s the drop!, an album of remixes of material from his 2018 orchestral album where’s the drop?  For it, plenty of revered tastemakers have been tapped for their talents to make this remix album a cerebral journey through sound ranging from deadmau5’ most popular tracks (“strobe,” “monophobia”) to the more obscure (“hr 8939 cephei,” “caritas”) all with a twist. Find deadmau5 now through early 2020 on his North American cubev3 tour.
www.deadmau5.com
www.live.deadmau5.com
www.mau5trap.com
www.twitter.com/deadmau5
www.instagram.com/deadmau5
www.facebook.com/deadmau5