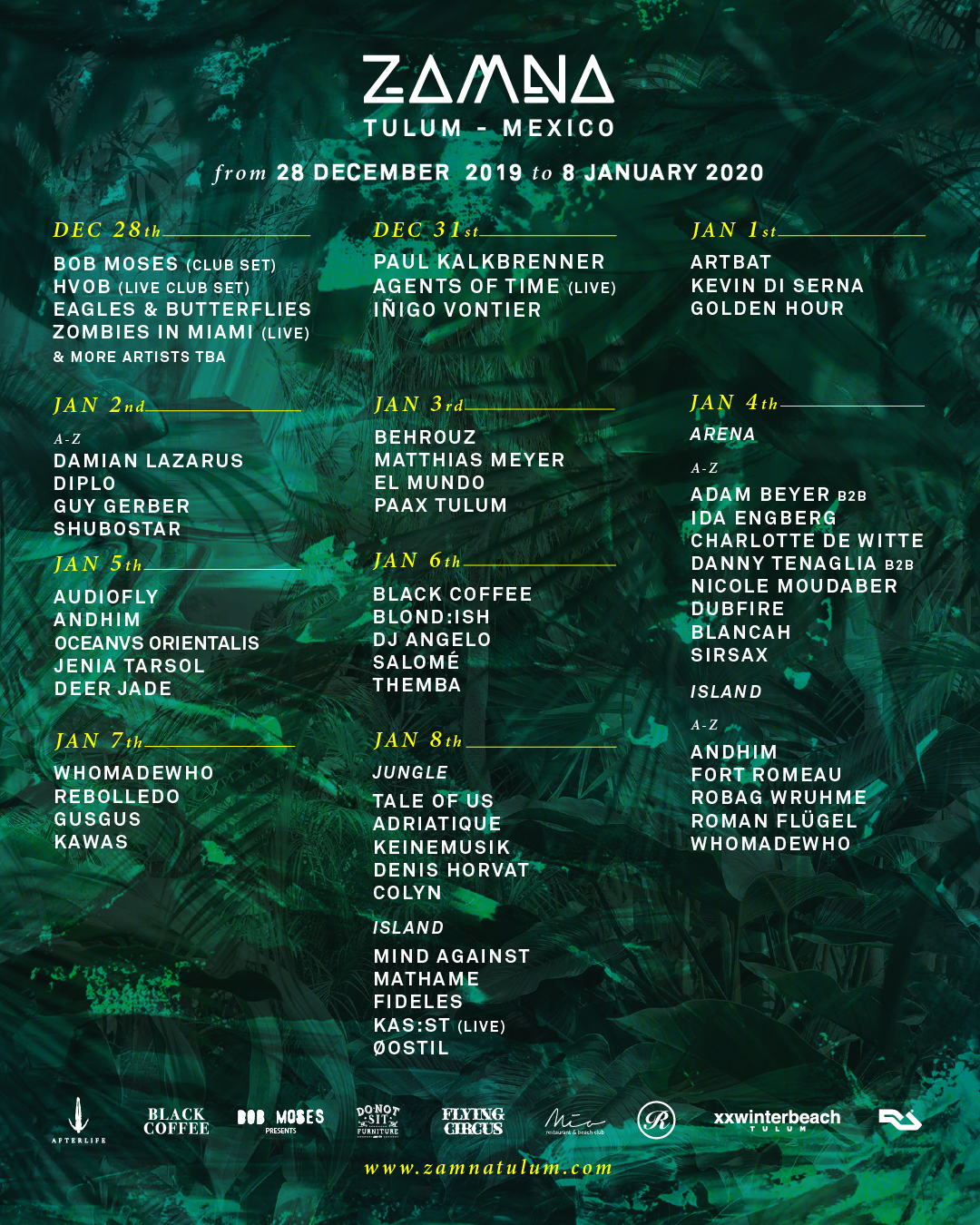 Paul Kalkbrenner, Diplo, Adam Beyer, Black Coffee, Damian Lazarus, Dubfire and Tale Of Us are just a small sample of the more than 50 names included in its line-up.

10 unique events divided in 4 different stages that will take place between the 28th of December 2019 and the 8th of January 2020 in Zamna Tulum, a magic and incomparable place in Tulum that has become the meeting point of the international electronic music industry.

Zamna Tulum has become the meeting point of the most prestigious electronic parties in the world in the last few years. A tendency that, taking into account its winter schedule, keeps defining itself as the epicenter of the international and Latin American electronic music scene. All of that without forgetting its surroundings as Zamna supports the mayan indigenous community’s social projects.

Everything will start on Saturday 28th of December with the arrival of Bob Moses who present Innercity Odyssey party to Zamna Tulum. HVOB, Eagles & Butterflies and Zombies in Miami complete the line-up of an event where many of the performances will be live. There are still more names to be revealed.

On Tuesday 31st of December it will be the turn of XX Winter Beach’s first encounter. Zamna Tulum will end the year  with the German icon, almost myth, Paul Kalkbrenner, the Italian trio Agents Of Time who will perform live and Iñigo Vontier.

A day later, on Wednesday the 1st of January Zamna Tulum will receive the new year with ARTBAT, one of the most important duos of the current international electronic music scene, in which will be their Mexican debut, on Mía Beach during the  daytime. They will be accompanied by Kevin Di Serna, who has made his debut on Innervisions this summer, and Golden Hour, who has made his debut on MoBlack.

On Thursday 2nd of January it will be the turn of XX Winter Beach’s second encounter. The brand will offer a back to back between Damian Lazarus and Guy Gerber which will be a truly musical journey, the renowned producer Diplo and Shubostar.

On Friday 3rd of January, again in Mía and during the  daytime schedule will be Do Not Sit with Behrouz, Matthias Meyer, El Mundo and Paax Tulum.

During the afternoon of Saturday 4th of January, Renaissance, one of the most iconic clubs in the British electronic scene, will arrive with a never seen before in Mexico line-up. Adam Beyer B2B Ida Engberg, Danny Tenaglia B2B Nicole Moudaber, Charlotte de Witte, Dubfire, Blancah and Sirsax will perform at the Arena stage. Meanwhile, Andhim, Fort Romeau, Robag Wruhme, Roman Flügel and WhoMadeWho will be at Island stage.

On Sunday 5th of January Flying Circus will return to Tulum. The event will take place on Mia Beach and will include performances by Audiofly and Andhim in a completely unique and new back to back format, Oceanvs Orientalis with a disco set, Jenia Tarsol and Deer Jade.

On Monday 6th of January it will be the turn of one of the most influential DJs and producers of the last years: Black Coffee. He will be accompanied by Blond:ish, Salomé and a B2B between Themba and Dj Angelo.

On Tuesday 7th of January Rated R hosted by Rebolledo party will take the control of Mia Beach. WhoMadeWho, GusGus and Kawas complete the line-up.

The climax will take place on Wednesday 8th of January with Afterlife’s fourth year in a row. Zamna Tulum’s most awaited for  party will arrive with an impressive production as they have been doing it in Europe and never seen before in Tulum. Tale Of Us, Adriatique, Keinemusik, Mind Against, Mathame, Denis Horvat, Colyn, Fideles, Kas:st and Øostil are on the line-up.

And on top of all of that Zamna Tulum has announced that there are still many surprises to discover among which are included huge names that will join some of the already announced events.

You can grab  the diverse tickets types on the official website: www.zamnafestival.com