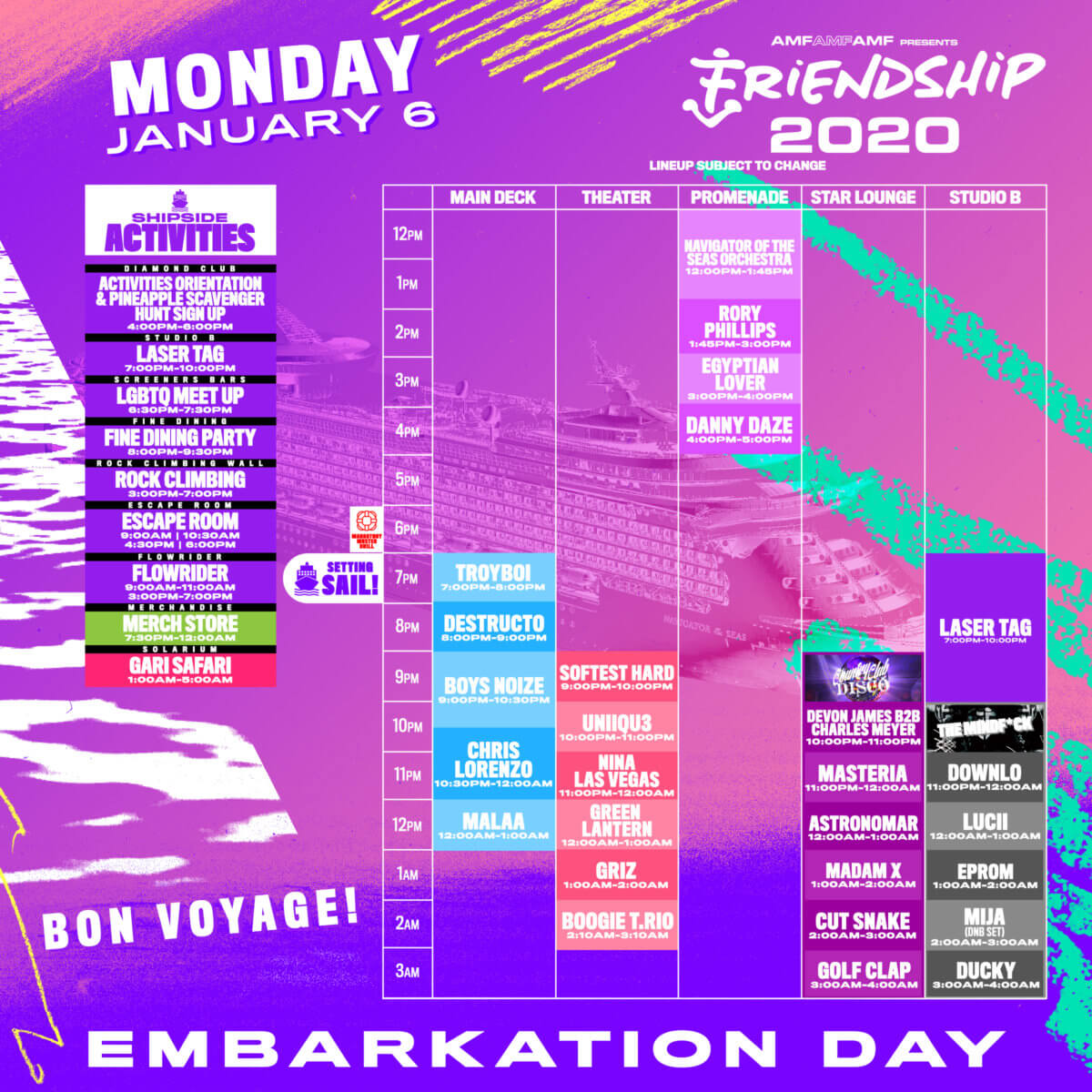 “Setting sail this January is FriendShip, an experience that fuses a music festival and a cruise for four days of dancing on a ship and on a private island. This upcoming sailing will mark the second year of the event, and it will take place on the Royal Caribbean’s luxurious Navigator of the Seas and stop at Coco Cay, Bahamas for two days. According to Gary Richards—president of LiveStyle North America, former founder and CEO of HARD Events, and known by his DJ alias Destructo—CoCo Cay recently saw a $250 million renovation while the Navigator of the Seas was given a $115 million facelift. The private island boasts the tallest water slide in North America, multiple beaches, floating bars, zip-lines, pools and bungalows, while the Navigator of the Seas will feature waterslides and an ice skating rink. Richards adds that the Navigator of the Seas is more “conducive” to the event than last year’s ship, Royal Caribbean’s Celebrity Equinox, because of its “party vibe” and multiple venue options onboard.
‘It’s really taking things to the next level,’ Richards says. ‘I’ve been doing these cruises now since 2012, and I definitely think of all the ones I’ve done this is going to far surpass it just because of how long we get to spend at the island and what’s in store there.’” — FORBES
As the world-class music cruise experience known as FRIENDSHIP gets closer to its January 6-10, 2020 sailing, event organizer Gary Richards, aka DESTRUCTO and AMFAMFAMF founder has announced details of its daily schedule.
On Monday, January 6, shippers come aboard to the sounds of the Navigator of the Seas Orchestra, Rory Phillips, Egyptian Lover and Danny Daze.  The boat sets sail on the first night sound-tracked by sets from TroyBoi, DESTRUCTO, Boys Noize, Chris Lorenzo and Malaa on the main deck, Green Lantern, GRiZ and Boogie T.rio in the Theater with laser tag followed by The Mindf*ck party with Ducky and Mija with Golf Clap presenting their Country Club Disco in the Star Lounge with Cut Snake, Madam X and more.
The Navigator of the Seas is at full throttle for a day at sea on Tuesday, January 7.  Shippers can hit the Main Deck to party up at Light Bass presented by Night Bass with Malaa, b2b’s from Volac & Phegmatic Dogs and Night Bass boss AC Slater & Chris Lorenzo, and Taiki Nulight (Check out Dancing Astronaut’s exclusive mix celebrating the Light Bass party from Nulight here).  Meanwhile fans who prefer something on the wintery side, lace up some skates at the boat’s rink for the ice disco with Doorly and Devon James. There are also daytime activities of a tiny hat making class, bingo, speed dating, yoga and a lap dance workshop and contest.
The evening rolls in at the theatre with a magic show with Robert Gould, comedy with Sean Patton and Ali Macofsky and burlesque with Dita Von Teese and friends.  Nighttime the aliens take over with the Area 51 theme night and main deck sets from Solardo, Latmun, Elax and more, an NVD label party with Gerry Gonza, Bruno Furlan and Bones in the Star Lounge and the Moonship party landing in Studio B with Space Jesus and Charlesthefirst.
Wednesday, January 8 is land-ho! FRIENDSHIP arrives the private eco-certified island of CocoCay, for its first of two island parties. With multiple beaches, pools, zip-lines, floating bars and bungalows, attendees will find it the perfect slice of Bahamian paradise with sun, fun and two stages of tunes—one with TroyBoi and Ty Dolla $ign’s ‘Beach House,’ the other the Sunsmash party with Green Lantern & Apache Indian, Boys Noize and Destructo b2b Chris Lorenzo–on white sand beaches.  View the video of Coco Cay here:
Shippers then can head back to the Navigator of the Seas for Animal Spirit theme night with AC Slater and Billy Kenny on the main deck, a ‘Shiptease’ show with Dita Von Teese in the Theatre followed by a club set from Bob Moses, comedy open mic in the Star Lounge, The Mindf*ck party with Boogie T., Ducky and others on the Prominade and the Sola party with Solardo, J. Phlip and more.
Thursday, January 8 finds FRIENDSHIP back for another private island party at Coco Cay.  Before the day officially begins, DESTRUCTO will helm a sunrise sermon on the beach. The afternoon features two stages of music with beachside sets from Bob Moses, Elax and Billy Kenny on one and Hermanito, Bruno Furlan and Egyptian Lover on the other, as well as yoga, mediation and more. Back on board gear up for the Tropical Xmas theme night with Main Deck performances from GRiZ and Mija, the return of the Moon.Ship party in the Theatre with Tydie Ky and Space Jesus preceded by a talent show where shippers can show off their best, Nina Las Vegas and Noizu on the Promenade and the Rump Shake in Studio B with Green Lantern and Egyptian Lover.
View the schedule here and online. 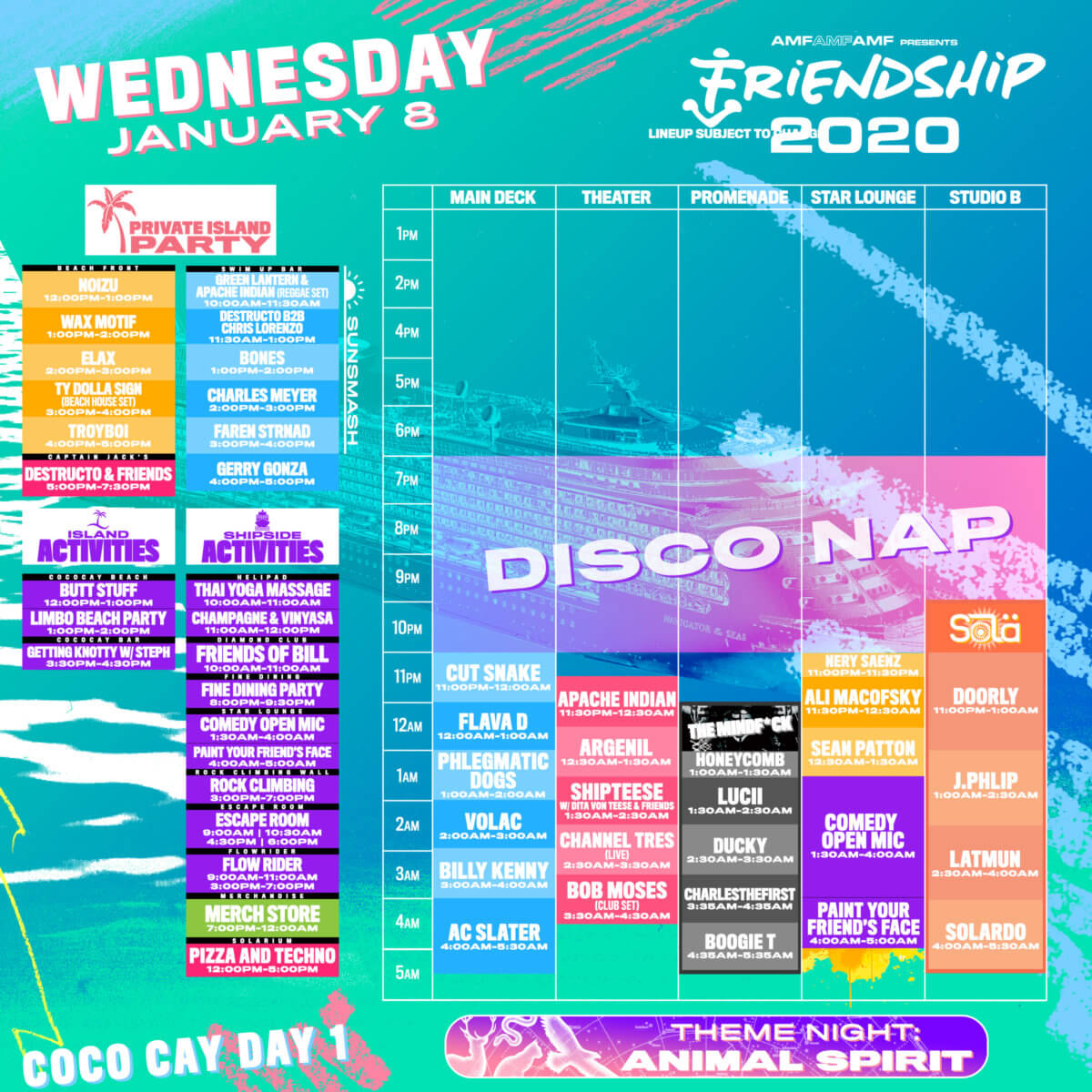 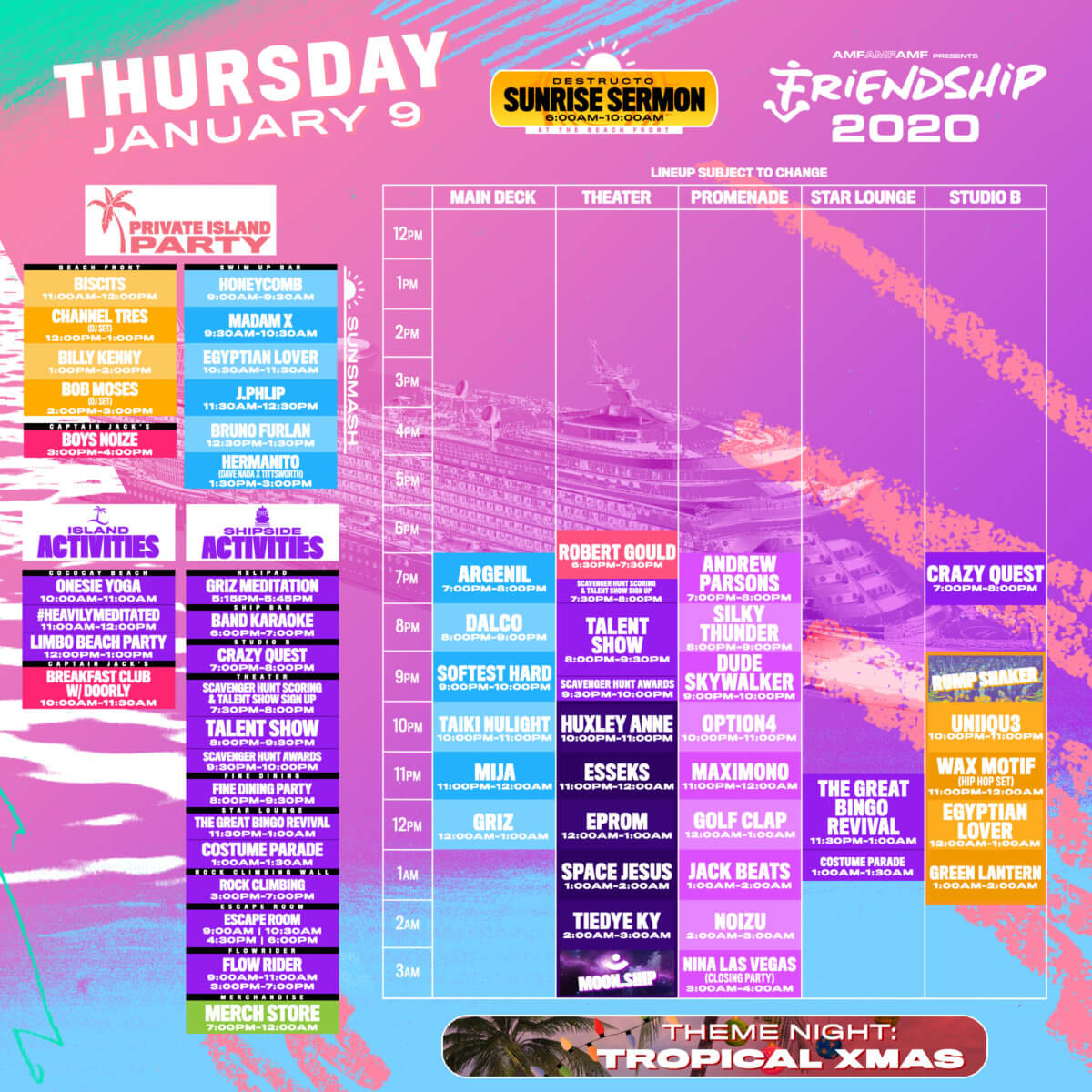 Beyond the epic performances and parties onboard curated by FRIENDSHIP’s founder DESTRUCTO (including last year’s Dial-A-DJ where cruisers could dial a special # to have a DJ delivered to their room for a private set), shippers will find themselves this turn on the Navigator of the Seas, Royal Caribbean’s ship which recently underwent a $115 million-dollar upgrade.  Check out the current updates to the boat’s upgrades HERE.
The inaugural FRIENDSHIP took place late 2018 aboard the glamorous Celebrity Equinox and sailed from Miami to two private island beach parties in CocoCay, Bahamas. The four-day/four-night electronic music cruise was attended by 3000 revelers and sold out in less than 24 hours.  It featured live performances and DJ sets from some of the best and most-popular international music acts, including Rüfüs Du Sol, Boys Noize, Dixon, 2manydjs, Claptone, and many more.
It’s not too late to come aboard. A limited number of cabins remain for purchase up until December 30.  For full details log on to www.thefriendship.com.
Check out the FRIENDSHIP 2018 Official Recap Video now at:
twitter.com/amfamfamf
www.instagram.com/amfamfamf/
www.facebook.com/AMFAMFAMF/
soundcloud.com/amfamfamf
AMFAMFAMF is a LiveStyle, Inc.  company. Gary Richards is President of LiveStyle, Inc. North America.
About LiveStyle, Inc.
One of the world’s largest music event producers, LiveStyle boasts a wide variety of leading live music properties.  LiveStyle produces and promotes single and multiday music festivals across North America, Europe, South America, Australia, and Asia. North American key operating entities include Made Event, React Presents, Disco Donnie Presents, and Life In Color, along with festivals and brands such as Electric Zoo, Spring Awakening, FriendShip, LIC Miami, BLNK CNVS, and AMFAMFAMF. In Europe, the company boasts key operating entities such as Monumental, b2s, ID&T, i-Motion, and Q-Dance, and festivals and brands including Decibel, Mysteryland, Awakenings, back2school, Air, Qlimax, Nature One, and Sensation. In Brazil, LiveStyle owns PlusNetwork, which has produced the enormously successful Tomorrowland Brasil festival and tours by internationally acclaimed DJs and artists. Together with the Belgian Tomorrowland organization, LiveStyle launched TomorrowWorld, the first international version of the Tomorrowland festival, and promoted the first South American Tomorrowland festival. LiveStyle continues to work with the Belgian Tomorrowland organization as its international partner to bring Tomorrowland to new territories outside Europe and to return to the USA and Brazil. LiveStyle also owns Beatport, the preeminent ecommerce platform for DJs, producers and dance music fans that helps launch the careers of the best underground artists and define global music culture. For more information, visit livestyle.com/