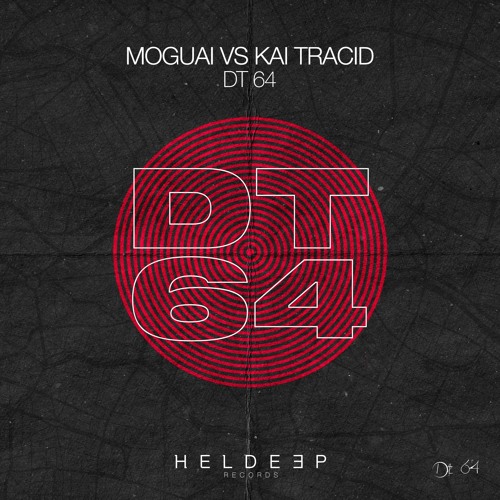 After continuing to impress and evolve his sound throughout 2019, MOGUAI continues that trend with his first release of 2020, joining forces with long-time friend Kai Tracid for the acid-influenced techno banger ‘DT64’.

MOGUAI has been prolific on the release front recently, with standout tracks dropping on the likes of Big Beat and the huge Oliver Heldens collab ‘Cucumba’, and now he returns to Heldeep Records with ‘DT64’ alongside fellow German Kai Tracid, best known for pioneering the combination of trance and acid sounds, who himself returns from a short break from releases in style.

A heavy kick-drum sets the dark tone from the offset, soon joined by a distorted, squelching acid line that evolves throughout and provides the backbone of the track. An arpeggiated piano melody switches the up track in the breakdown, creating a hands-in-the-air moment before increasing in intensity before the drop, where the pounding acid lead resumes normal service. Make no mistake, this is a track firmly rooted for the dancefloor.

On the origins of the track, MOGUAI said; “Kai Tracid and I have known each other for ages, I supported his early stuff heavily when I was into techno and acid back in the day. There was a party we played together in Poland. We were on the same plane and we spoke about the old days and new genres, and I thought it would be a cool idea to do something old school in a new school way. It was a very inspiring and creative talk and so we decided to do something. He sent me an acid line and I built something around it. When I worked on the track I thought of going to my first rave, it was Mayday in Berlin. I remembered the story from Mayday, the idea behind it was to help keep a radio station alive in Berlin which was called DT64, they wanted to shut them down so they ran this party I thought it was a homage to my starting point and so felt the name was a good fit. I’m from Germany and Mayday is the mother of all raves but no-one talks about the original story of Mayday nowadays, so it’s nice to pay tribute.”

On working with MOGUAI, Kai Tracid said; “After André and I had a great chat about club music I felt super inspired to start a new track. Back in the studio I took my old vintage Roland TB-303, which I bought 25 years ago, and made a few ACID lines. André liked it and we joined forces and started the collaboration. For me, it was clear that the track should represent the sound of what I like to bring to my DJ sets. A classic 303 mixed with a melodic techno break. MOGUAI is super motivating and great to work with.”

Grab your copy of ‘DT64’ from MOGUAI and Kai Tracid now via Heldeep.