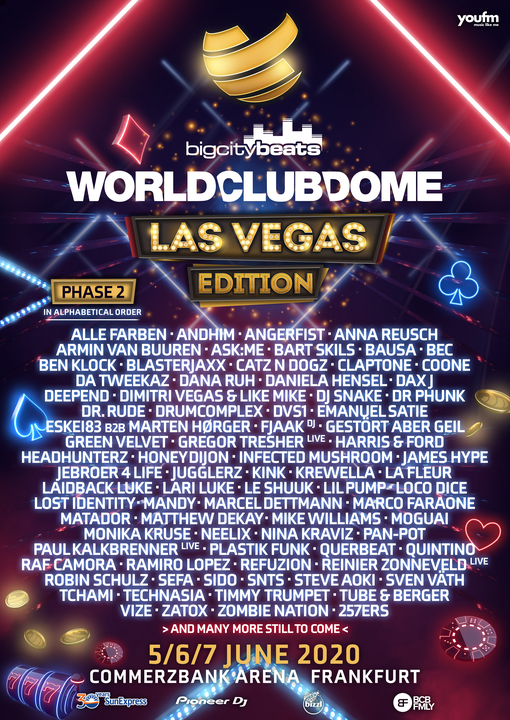 Having kicked off the new decade with the hugely successful Winter Edition – the first major event of this year’s festival calendar – BigCityBeats is setting its sights on warmer months, dropping a sizzling second wave of artists for the sixteenth instalment of its flagship event this summer.
WORLD CLUB DOME: LAS VEGAS EDITION PHASE 2 TRAILER
Boasting a wealth of superstar talent from across the entire music spectrum, the WORLD CLUB DOME: Las Vegas Edition is set to be another unmissable show. Dutch dynamo Mike Williams, British hit producer James Hype, French future house pioneer Tchami and Germany’s very own Robin Schulz are all set to take over the Commerzbank Arena alongside already announced acts Armin van Buuren, Dimitri Vegas & Like Mike, DJ Snake and Steve Aoki on the main stage.
WORLD CLUB DOME: POOL SESSIONS PHASE 2 TRAILER
This summer, the legendary WCD Pool Sessions will see three major takeovers from Sven Väth’s Cocoon, Paul Kalkbrenner and Claptone’s The Masquerade. Set within the grounds of the Commerzbank Arena, the WCD Pool Sessions are a world away from the concrete jungle of Frankfurt’s bustling city. Surrounded by lush greenery, the pool stage is a fun and vibrant oasis for partygoers to lose themselves in the sounds of some of the hottest acts around. Andhim, Ben Klock, Green Velvet, Honey Dijon, Loco Dice, Matador, Nina Kraviz, Pan-Pot, Reinier Zonneveld (live), Technasia and many more are just some of the artists set to play throughout the weekend.

Without doubt one of the highlights of WORLD CLUB DOME’s summer edition, the WCD Pool Sessions is a festival in itself, offering a cool haven to dance off those heady summer days. With one pool open to all, and another pool located in the luscious VIP chill out section, whether you want to take a quick dip or dance in the water all night there’s plenty of space for all!

BUY TICKETS
Launching the BigCityBeats GLAM Festival in Düsseldorf last month, the event will once again play host to a huge number of influencers and celebrities, bringing a much welcome fashion, beauty and lifestyle element to the WCD experience, that is sure to be taken to the next level this June. The festival’s innovative Club Kitchen concept is also set to return to Frankfurt, with Michelin-star chefs whipping up gourmet cuisine to rival any other festival food.

Widely renowned as the entertainment capital of the world, Las Vegas unites the world’s best artists, performers, DJs and chefs in a decadent and luxurious neon landscape where anything is possible and the unimaginable is imagined. An ethos that directly mirrors that of BigCityBeats CEO Bernd Breiter, who’s trailblazing ideas have seen his brand recognised as one of the leading events companies on the planet (and beyond), Sin City is the perfect motif for the master of entertainment. Keeping their cards close to their chest for the 2020 edition, fans can bet that, as with last year’s aptly named Space Edition, which saw BigCityBeats – in cooperation with the European Space Agency – host the first ever DJ set live from space, WORLD CLUB DOME will be going all-in for the Las Vegas Edition.

With over 250 acts from across the entire music spectrum set to play across the weekend, WORLD CLUB DOME’s flagship festival is guaranteed to cater to every musical taste. Combining music, fashion, food and lifestyle, the WORLD CLUB DOME experience is not one to be missed. Mark your diaries and grab your tickets now!