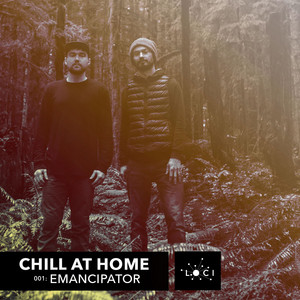 EMANCIPATOR ENSEMBLE ‘MOUNTAIN OF MEMORY’ TOUR DATES
UPDATED
LISTEN NOW HERE
With many stuck inside these days, Loci Records has come to the rescue with a new rotating playlist titled “Chill at Home.” Portland-based electronic musician Emancipator has been selected as the first curator of the series, which is intended to provide a sense of comfort and familiarity during this troubling and uncertain time.
Featured artists include Maribou State, Khruangbin, Populous, Jamie xx, Tourist and more.
Listen now here: http://ffm.to/chill-at-home
Look for new a new curator from the Loci stable to be featured every two weeks.
Meanwhile, look for Emancipator to release his sixth studio album Mountain of Memory on Loci Records on April 3.  His Emancipator Ensemble tour dates to support the new album, originally set for this spring, have been moved deeper into the summer.
Catch Emancipator Ensemble on tour:
About Emancipator:
Classically trained as a violinist from an early age, Douglas Appling’s organic approach to electronic music production as Emancipator draws inspiration from a wide range of international cultures and musical genres, culminating in a refreshingly authentic brand of electronic music that has infiltrated global consciousness. His sixth studio album Mountain of Memory due out April 2020–follows his other albums Baralku (2017), Seven Seas (2015), Dusk To Dawn (2013), Safe in the Steep Cliffs (2010) and Soon It Will Be Cold Enough.
Follow Emancipator
Web | Instagram | Facebook | Twitter