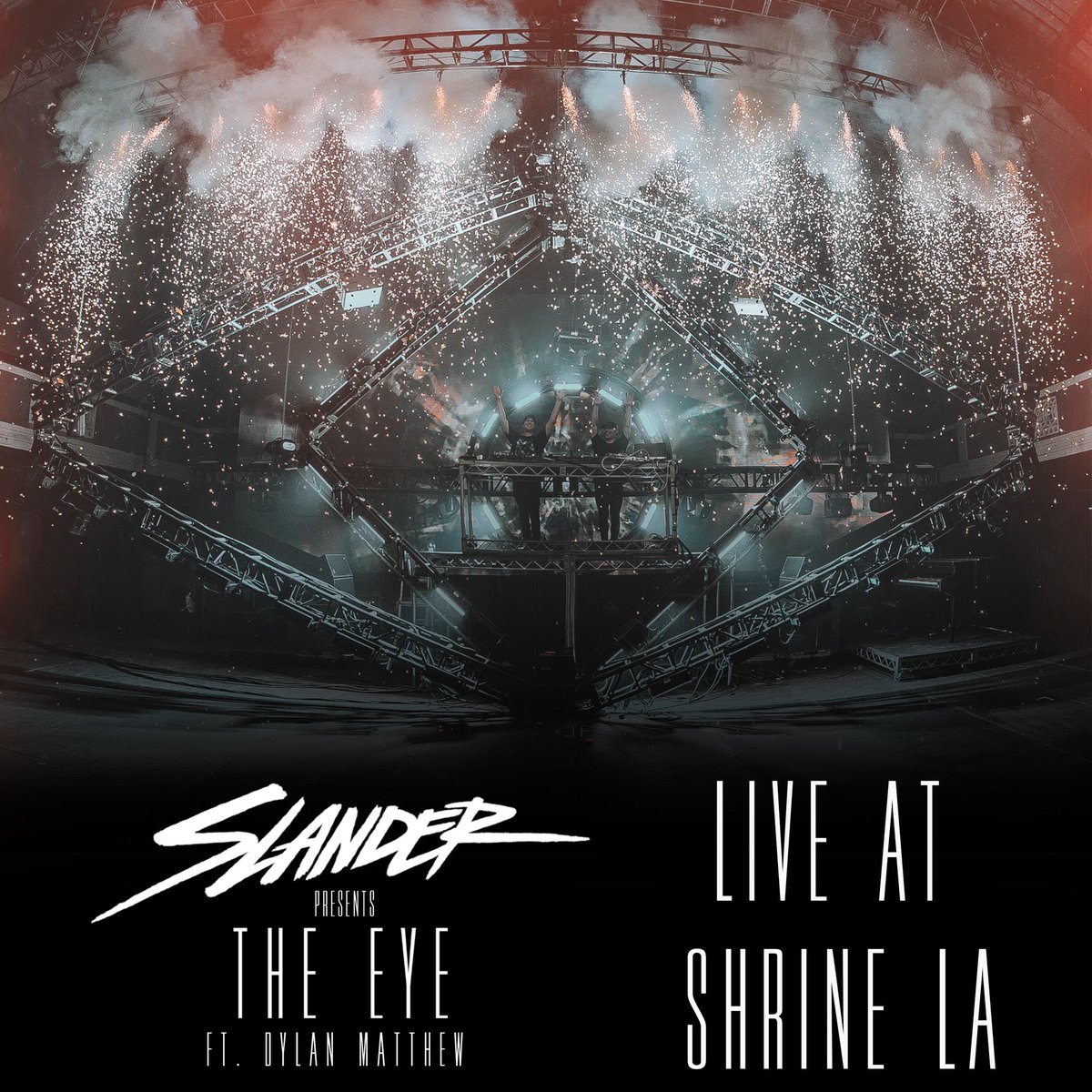 WATCH AT
TWITCH.TV/SLANDER
For the first time ever SLANDER are releasing a full high quality video recording of their EYE TOUR show. The electronic music duo will be premiering it this Friday, March 27 at 7:00pm PT on their brand new twitch channel (www.twitch.tv/slander) and will be watching it with Dylan Matthew alongside fans.  The show they will be airing was captured February 1, 2020–the second of two sold-out headlining nights at The Shrine in Downtown Los Angeles.
After the premiere Derek and Scott will be answering questions and might even start a brand-new song with Dylan Matthew live on stream.  Once the livestream ends the high-quality recording will go up on SLANDER’s YouTube page for future enjoyment.
“We really want to experience this moment with you guys together so you can see our reactions to the show as well,” wrote SLANDER who is Derek Andersen and Scott Land on their Instagram.  “We love you guys so much and we hope this brings you a bit of light and happiness.”
Look for SLANDER and Dylan Mathew to return to the road later this year on THE EYE tour.  Details can be found at www.slanderofficial.com
Tune In:
SLANDER Presents THE EYE featuring Dylan Mathew
Live Stream of ‘Live At Shrine LA’
Sold-out show captured February 2020
Friday, March 27
7:00PM PST
Watch at: www.twitch.tv/slander
About SLANDER:
SLANDER’s (Derek Andersen and Scott Land) dedication to their craft and the development of their own unique sound has earned them support from the likes of Skrillex, DJ Snake, Excision, Bassnectar, Porter Robinson and more. Among dozens of chart-topping remixes, their original Heaven Trap hit “Love Again” featuring vocalist WAVZ has been listened to over 10 million times while being championed by Diplo’s Mad Decent imprint.
Other notable releases from SLANDER include:
“GUD VIBRATIONS” with NGHTMRE with almost 35 million Spotify plays
“First Time” with Seven Lions with over 18.5 million Spotify plays
“All You Need To Know” with Gryffin with more than 72 million Spotify plays
“Love Is Gone” whose video was a massive undertaking due to its boundary-pushing in CGI
Beyond building a mint name for themselves through jaw-dropping original productions and massive collaborations, SLANDER also include “label heads” to their resume. The LA-based helm the popular Gud Vibrations brand and record label with good friend NGHTMRE, ensuring their legions of fans that their famous GUD VIBES are only getting started. Based on their Mad Decent released single “Gud Vibrations,” best friends NGHTMRE and SLANDER decided to build their brand together, supporting good music, good friendships, and good vibes. Their GV brand has seen exponential growth with a world-wide audience.
Follow SLANDER at:
www.slanderofficial.com
https://twitter.com/SlanderOfficial
https://instagram.com/SlanderOfficial
https://www.facebook.com/slanderofficial/
https://soundcloud.com/slanderofficial