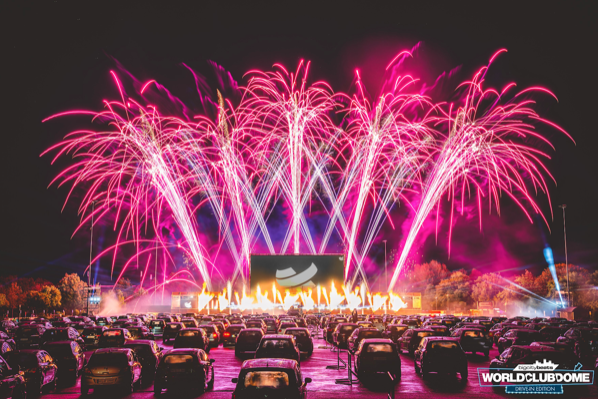 Website | Facebook | Instagram
Armin van Buuren, Afrojack, David Guetta, Dimitri Vegas & like Mike, Robin Schulz, Steve Aoki, Timmy Trumpet and more will feature across the weekend.
On 05/06/07 June. The Las Vegas Edition of the BigCityBeats WORLD CLUB DOME was set to take place in the Commerzbank-Arena Frankfurt. However the event was cancelled for reasons known around the world. Nevertheless, BigCityBeats CEO Bernd Breiter and his hardworking team, racked their brains looking to create a concept that would still allow WorldClubbers the opportunity to experience the glamour of World Club Dome – Las Vegas, but in guaranteed safety. Their final result was to combine real life and virtual reality and create a one of a kind World Club Dome – Las Vegas Edition. Three days, the largest club in the world across all mediums, all channels, stimulating senses all through the prism of live events and the power of the internet. Live from Mannheim, live from the Frankfurt Stadium Pool, and broadcasting around the world.
Las Vegas, widely known as the entertainment capital of the world, millions of illuminating lights, the most extravagant casinos in the world, and the most legendary acts in the history of show business. BigCityBeats in keeping with the spirit of Vegas, will bring this grandeur to Germany. Get ready to experience this unique moment in person on the first weekend of June 2021! However this year, all is not lost, as a remodeled Las Vegas Edition is still set to take place, with a huge lineup of international DJs. The remodel will instead take place online, as well as in the form of the hugely popular WORLD CLUB DOME Drive-In event. The Drive-In event is set to take place in the enormous parking lot at the front of the Mannheim Maimarkthalle.
WORLD CLUB DOME 2020 featured by the worlds best acts: Armin van Buuren, Afrojack, Da Tweekaz, David Guetta, Dimitri Vegas & Like Mike, EDX, Le Shuuk, Lost Frequencies, Robin Schulz, Steve Aoki, Timmy Trumpet, W&W and many more thats will play across the weekend.
Friday – The World’s First Digital Record Release Party
It begins on Friday June 5, 2020, which of course was the original opening day for the “Largest Club in the World”. Our first virtual record release party takes place as part of the live stream on BigCityBeats.FM and YOU.FM BigCityBeats. The celebratory release of BigCityBeats WORLD CLUB DOME Vol 32 is being streamed at 6pm on www.WorldClubDome.com, and at 8pm live on YOU.FM. The hugely successful BigCityBeats compilation series, which almost always reaches the top of the music charts, is this year subtitled “Las Vegas Edition”. Its track-list features huge tracks from many of the headline DJ’s that were scheduled to play at June’s World Club Dome. The perfect musical warm-up for the upcoming BigCityBeats WORLD CLUB DOME digital weekend.
Saturday – BigCityBeats WORLD CLUB DOME Las Vegas Drive-In
On Saturday June 6, at exactly 12 noon, the huge live event will commence streaming, keen observers will have already realised that this is the exact time the gates of the Commerzbank-Arena in Frankfurt would have swung open. To begin the event, all BCB.FM superstar DJs will share a symbolic handshake. Then as the evening approaches, a moment that no-one around the world could imagine. A spectacular live show, which will include pillars of fire, mind-blowing lasers, CO2 cannons, plenty of pyrotechnics, and of course, the most ambitious and best music event in Europe. While WorldClubbers will have to exercise patience until they can experience Las Vegas Edition 2021 in Frankfurt, the Mannheim Maimarkthallen is set to become one of the biggest dance floors in Germany: 600 “dancing cars”, a total of 1000 party goers, plus hundreds of thousands of people from around the world tuning into the live stream. Live on stage: Gestšrt aber GeiL and Le Shuuk. And connected live on big screen: EDM superstars from around the world. But that’s not all we have in store. Fans of the harder sound of dance music can prepare themselves for a Zombie Stage takeover of the WORLD CLUB DOME Drive-In. An additional highlight of the night will be further announcements of headline DJs for BigCityBeats WORLD CLUB DOME Winter Edition in Dusseldorf, January 2021. 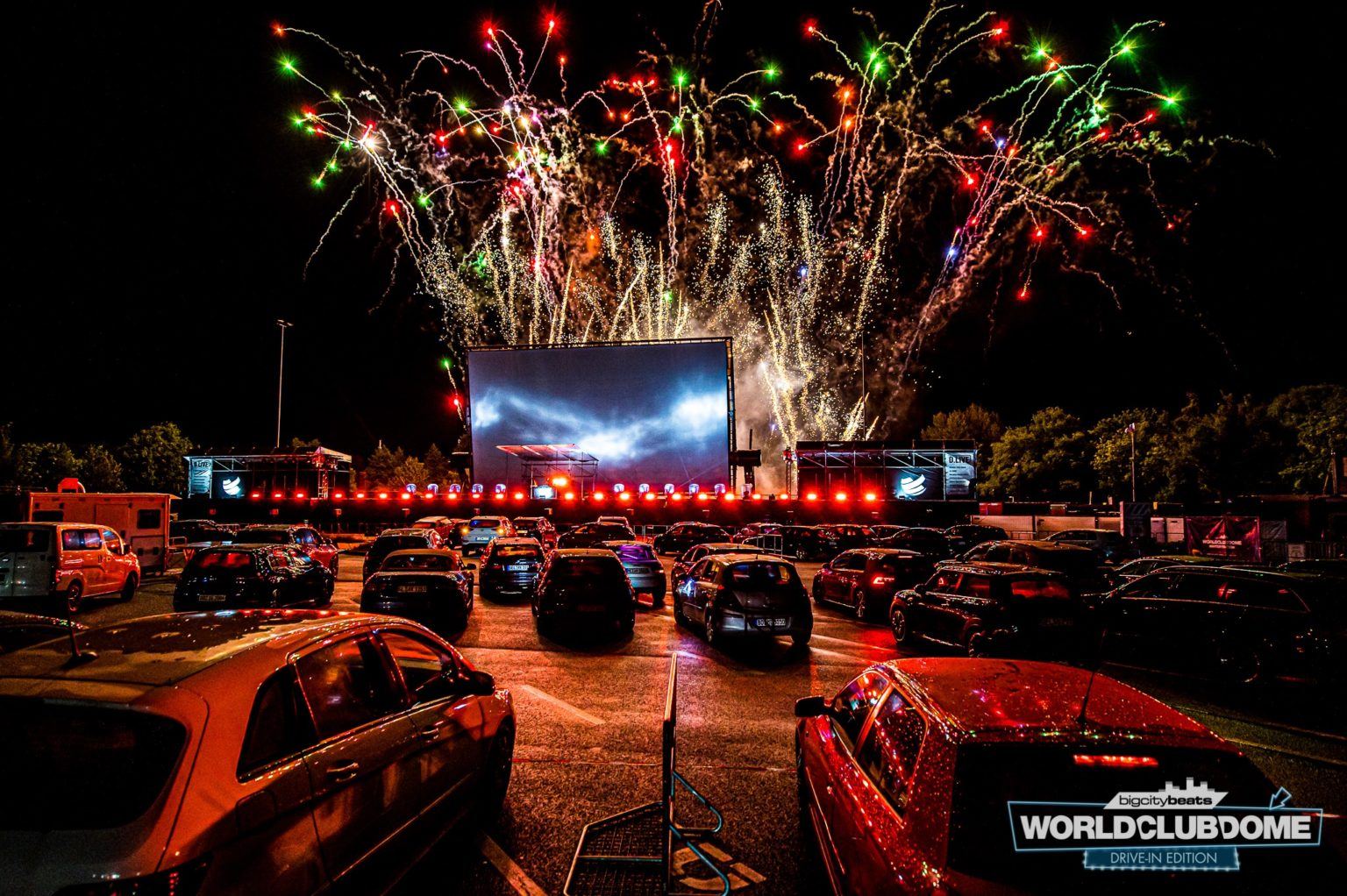 Sunday – An afternoon dedicated to WCD Pool Sessions – video streamed live from the Frankfurt Stadionbad
Day 3 from 12 noon onwards, WorldClubbers can look forward to the spectacular finale of the alternative Las Vegas Edition. WCD Pool Sessions will broadcast their digital edition live from the Stadionbad in Frankfurt offering a handpicked selection of DJs and exclusive sets. The Pool Sessions promises to deliver a perfect summer’s day in the shape of outstanding music. And following the Pool Sessions at 6pm, the virtual Main Stage takes over, providing mesmerizing fireworks and of course top class DJs. The ultimate end to an incredible BigCityBeats WORLD CLUB DOME Digital Weekend 2020.
Pre-registration for the Las Vegas Drive-In has already begun. With pre-sale to follow shortly.
In co-operation with our partner YOU.FM, listeners can win two car tickets for the incredible live event in Mannheim
Video Trailer: 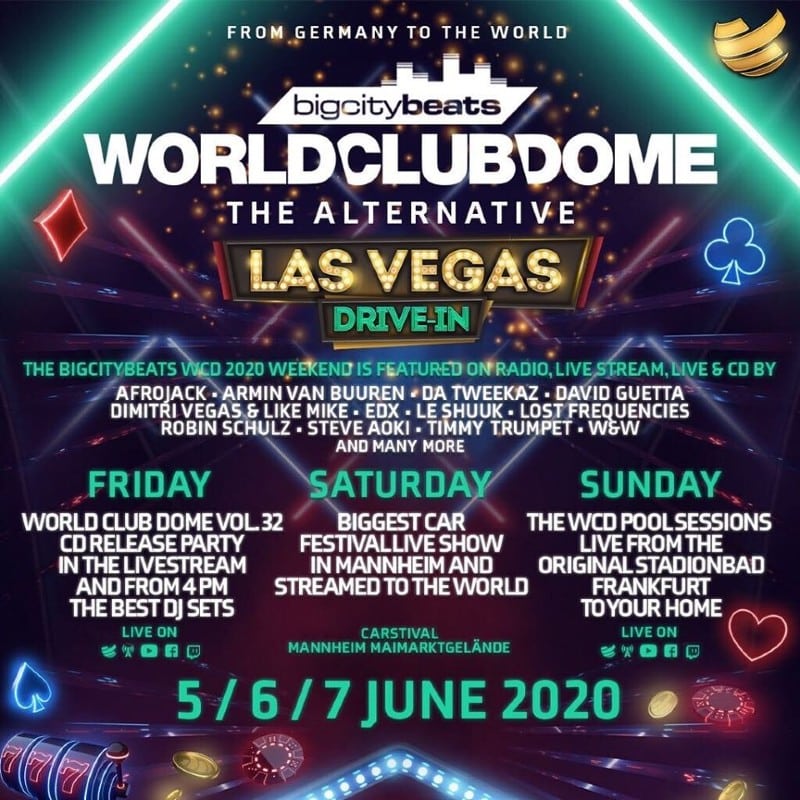