“Chloe Lilac pours her heart out” [on “Here’s Your Song”] – The FADER
“Her relatable lyrics and dreamy melodies don’t just make music. They make moments.” – Refinery29
“Lilac’s raspy voice and the thumping beat of the drums give this song the perfect end-of-summer mood” [on “Summer”] – NYLON
“an undeniably exuberant affair, Lilac easily balances maturity with the revelry” [on “High School”] – Billboard
“jarring vocal blasts and dreamy electronic synths” – PAPER
“an indie pop star on the rise” – Highsnobiety
“she shows a knack for an emotional gut-punch” – DIY
“everybody’s favorite rebel” – Bandsintown
“[Chloe] has laid the framework for a potentially colossal 2019.” – Fashionably Early
“Chloe Lilac has mastered the art of ‘bedroom pop.'” – HillyDilly 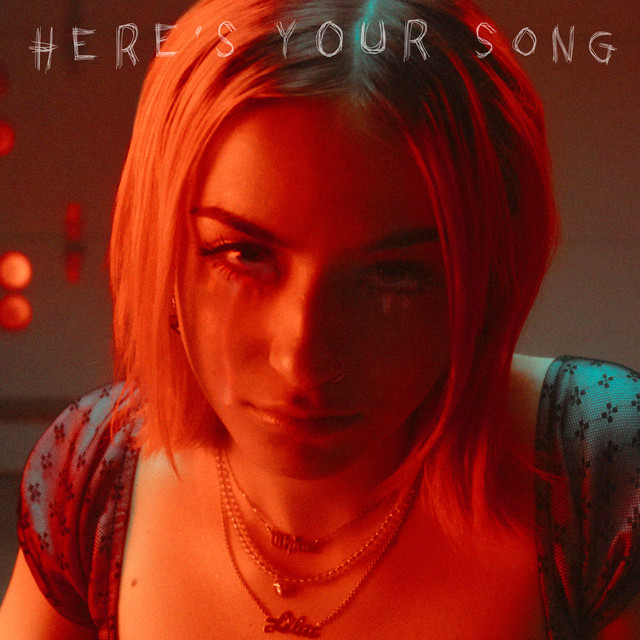 Debuting today with The FADER, the song uncovers a personal story, of which Chloe describes, “This song is one of the most important songs I’ve put out. It’s about feeling used by a friend I used to have and how painful that was for me.” Detailing the inspiration behind the Jasper Soloff-directed video, Chloe adds, “This video was a passion project for everyone on my team and was the most I’ve been involved in writing the treatment and creating the video. We used a sex doll to symbolize only being viewed for my sexuality rather than my character as a woman. In the beginning of the video it’s just me, symbolizing how alone and uncomfortable I felt, and by the end I’m with all my friends who supported and uplifted me.”

“Here’s Your Song” is Chloe’s first release following a landmark 2019 for the budding artist. Last fall, singles “High School” and “Special” kicked off the release of Chloe’s upcoming 2nd EP, each debuting alongside stunning official videos. Both tracks were given Spotify ‘New Music Friday’ placement and saw critical love from outlets such as Billboard, who called “High School” “an undeniably exuberant affair,” while Refinery29 called “Special” “a shot of some catchy nostalgia.”

Chloe toured extensively in 2019 including direct support runs with mxmtoon and Tessa Violet as well as headline dates in NYC and L.A. for Neon Gold Records’ ‘Popshop’ showcases. Chloe also performed at SXSW 2019 and has toured with other rising artists including Charlotte Lawrence, Sasha Sloan, and Rejjie Snow. Chloe documented her fall 2019 L.A. headline trip in a photo diary exclusive with Flaunt.

Early 2019 debut EP, Manic Pixie Dream, kickstarted a slew of critical acclaim that has secured Chloe Lilac a well-deserved spot as a top rising artist. PAPER proclaimed, “she’s shattering perceptions of damsels in distress simply by being vulnerable. But there’s strength in her vulnerability,” while Refinery29 included Chloe among their 2019 ‘Artists To Watch.’ Chloe has already enjoyed 16 million+ Spotify streams, a feat first kicked off by the 2018 release of “Stolen Liquor” which hit #1 on Hype Machine and sparked NYLON to claim the track “will have you reminiscing about those summer nights in high school.” Single “Summer” has attained 9 million + Spotify streams alone, sparking support from Ladygunn who debuted the track’s official video.

Born and raised in Brooklyn, NY, Chloe’s humble roots of sneaking out to perform on the streets of NYC by age 13 continue to inspire her artistry. Building her skills as a self-produced songwriter, Chloe began releasing songs in 2017 with her first-ever release, “Reckless,” breaking the Top 5 on the U.S. Spotify Viral Chart. Her early songs and live shows saw critical nods from outlets like DIY Magazine, who note Lilac’s “knack for an emotional gut-punch,” and HillyDilly, who proclaim, “Chloe Lilac has mastered the art of ‘bedroom pop.'”