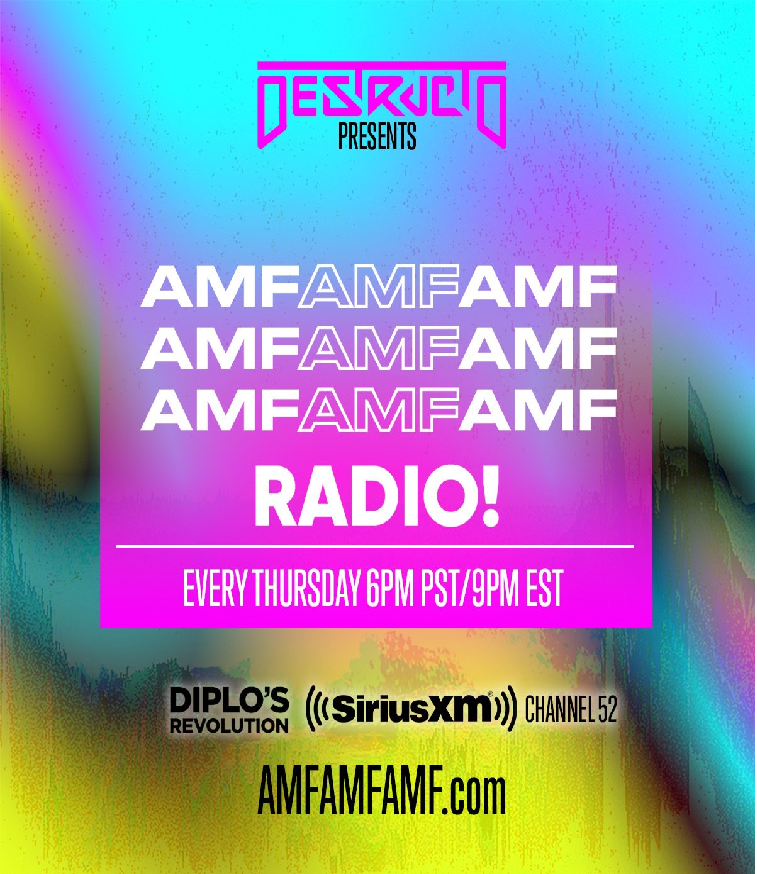 It’s time to “F**k S**t Up”…
Once again expanding his ever-growing sphere of influence, Los Angeles producer, artist, DJ, and dance music renegade DESTRUCTO joins the new SiriusXM Channel “Diplo’s Revolution.“ Handpicked by longtime friend Diplo, DESTRUCTO will host “AMFAMFAMF RADIO,” his very own radio show on the station representing his new All My Friends brand.
Get it on SiriusXM Channel 52.
Meanwhile, tomorrow (April 13), DESTRUCTO will unleash a brand new single, “F**king S**t Up” featuring Busta Rhymes via his own HITS HARD label. Over ominously propulsive production courtesy of DESTRUCTO, GRAMMY®Award-nominated multi-platinum hip-hop legend Busta Rhymes unloads a barrage of battering ram rhymes. His rapid-fire signature flow locks into an unbreakable groove with the apocalyptic beat as these two titans team up to make dance music dangerous again.
Listen now here:
First joining forces live, they slyly hinted at this creative explosion on stage during the January  launch of the Let’s Be Friends Tour in New York City. Check out the clip of the pair together from the show here:
Heralded Diplo not too long ago on DESTRUCTO: “The music scene here has exploded. The DJ scene, the electronic scene, is going in overdrive and one of the key figures of this is this one guys right here, LA native, Gary Richards aka Destructo… He’s had a long and illustrious career. From working with Rick Rubin to being on ULTRA, OWSLA, remix the likes of Giorgio Moroder, YG and even MAJOR LAZER. He’s also one of my good friends, so we’re gonna step up right now with Destructo…”
DESTRUCTO on tour:
About DESTRUCTO:
Since 2011, DESTRUCTO (Gary Richards) has dominated the dance floor on his own terms. He went from the acclaimed Technology EP (2012) and Higher EP (2013) to high profile remixes for artists as diverse as Depeche Mode, Giorgio Moroder, Major Lazer, Rob Zombie, Digitalism and more. 2014 saw the precision-guided producer in the realm of g-house (where rap melds with house music) introduce his singular solo style with the West Coast EP, boasting collaborations with YG, Ty Dolla $ign, Problem, Too $hort, Warren G and Kurupt.  Along the way, he’s touched down for shows everywhere from Australia and Fiji to Tokyo and Ibiza in addition to crisscrossing the country on alongside the likes of D.R.A.M., E-40, iLoveMakonnen, Anna Lunoe, Wax Motif, REZZ, Felix Da Housecat and more.  Released in early 2017, the RENEGADE EP features collaborations with E-40 and Too $hort, Ty Dolla $ign & iLoveMakonnen, Pusha T & Starrah, Problem and Freddie Gibbs.  DESTRUCTO‘s latest releases “Bassface,” “Loaded” featuring Yo Gotti and “Shots To the Dome” with Gerry Gonza are out now on HITS HARD.
For more information on DESTRUCTO, visit:
djdestructo.com
www.facebook.com/DESTRUCTOHARD