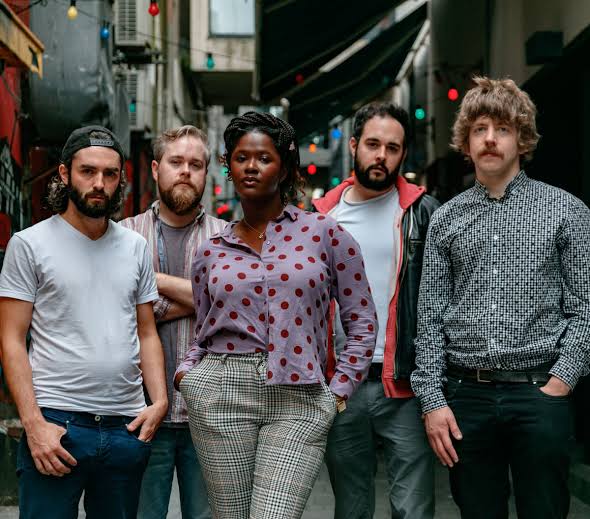 Irish future-soul five-piece Shookrah release their self-titled album Shookrah on 25 October via Broken Records. Previous single ‘Notions’ premiered on Variance Magazine, and immediately received support from RTÉ 2FM. Shookrah were named Best Act of 2017 and 50 People to Watch in 2018 by The Irish Times. They have seen substantial press support from the likes of The Irish Examiner, AFROPUNK, Wonderland Magazine, Clash Magazine, Music Week, District Magazine, Nialler9, Made in Shoreditch Magazine, and Surviving The Golden Age. Shookrah have received airplay from BBC’s Radio Ulster, and their track ‘Gerascophobia’ was named BBC Ulster’s Across The Line track of the day. Racking up nearly 300K streams on digital platforms they shared the stage with Billy Ocean on his Irish tour and have played Body & Soul Festival, Electric Picnic, Wigwam, Quarter Block Party, Other Voices Music Trail, and Knockanstockan Festival.

Based in Cork, Ireland, the band has gone from strength to strength and Shookrah are positioning themselves as important pioneers in the blossoming urban music scene since their 2013 inception. Shookrah is the combined talents of Senita Appiakorang (lead vocals), Emmet O’Riabhaigh (drums), Daniel Coughlan (guitar), Diarmait Mac Carthaigh (keyboard) and Brian Dunlea (bass guitar), each member bringing their own unique style and set of influences to the table.

Serving fresh helpings of synth-grooves, interruptive hooks and dystopian romance-themed songs their sound sits somewhere between neo-soul and the emerging schools of R&B/Soul that define themselves as ‘Future Soul’. Influences include the likes of Hiatus Kaiyote, Anderson .Paak and The Internet, with a sound that can be likened to that of Solange, meets Robert Glasper and Thundercat.

Shookrah is a sonic snapshot of a shared moment between a group of true creatives, documenting their artistic growth. Whether the specifics involve loving someone or letting go, Shookrah effortlessly holds to a mood with seamless transitions in between. Groovy instrumental contributions serve as a framework for rich, smooth vocals  – every element brushed with seductive audacity.

Speaking of the album, the band comments: “It’s been a long road leading to this album, 6 years and a host of members dwindling down to the core 5 we have today. It’s a time capsule; of where we are in the world right now, of where we’ve arrived in our sound and understanding of who Shookrah are. There’s been significant learning for us in it, which I think will inform we respectively go in our music careers and as an ensemble. We hope the tireless love of making it translates through.”

“This album was over a year in the making, with intensive writing and arranging happening for months before going into the studio with Brendan Fennessy (O Emperor) to record. We wanted to go down the route of ruthlessly cutting songs that didn’t make the cut, cutting all the fat and narrowing it down to ten tunes.”