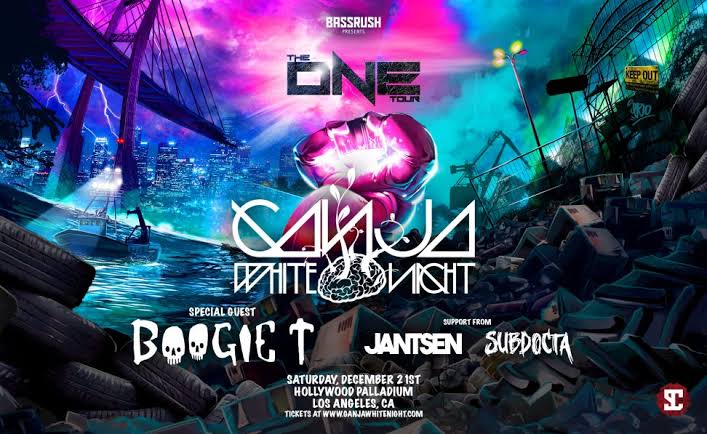 Belgian bass duo Ganja White Night arrives in Los Angeles this Saturday, December 21 for the last date of their national ‘The One’ U.S. tour happening at the legendary Hollywood Palladium. Also on the bill is special guest Boogie T with support from Jantsen and Subdocta.
Get tickets now at: https://concerts1.livenation.com/event/090057308ABB1D6D
Ganja White Night’s live show has been resonating with fans across the country having sold out shows in many notable venues including the Aragon Ballroom in Chicago, Turner Hall Ballroom in Milwaukee, Royal Oak Music Theatre in Detroit, Echostage in Washington DC and The Fillmore in Philadelphia, just to name a few.
At the Palladium, expect the fan-dubbed ‘wobble masters’ to perform material from The One—their newest album on their Subcarbon Records—along with material from their extensive catalogue set to stunning visuals created by My Name is Ebo.  The One features 13 tracks including collaborations with Boogie T, Apashe and Caspa.  “We choose The One to get back to our main character Mr Wobble,” shares the duo on the meaning of the album title. “We stepped aside during The Origins to focus on the root of his power, but now we’re focusing on Mr. Wobble. We want to tell more about his personal story in the future.”
Listen to The One now at:  https://smarturl.it/gwntheone
About GANJA WHITE NIGHT:
Comprised of Benjamin Bamby & Erwan Dodson, Belgian bass duo Ganja White Night have taken the electronic world by storm with their iconic and unique sound. Their dedicated fans have quickly dubbed them the “Wobble Masters” and for good reason.  With an unmatched stage presence and 100% live and original musical performance, Ganja White Night is truly a one-of-a-kind audiovisual experience. Over the course of a decade, the duo has released seven LPs with their eighth, the highly anticipated The One, dropping earlier this month. It was in 2016 that the duo set out to establish their world, and the new album continues to unravel the ever-expanding universe of Ganja White Night. Teaming up with legendary Belgian street artist My Name Is Ebo, their immersive universe was born with the release of their music videos “Wobble Master,” “LFO Requiem” and “Chak Chel.”
Follow Ganja White Night at:
www.ganjawhitenight.com
www.subcarbonrecords.com
www.twitter.com/ganjawhitenight
www.instagram.com/ganjawhitenight
www.facebook.com/ganjawhitenight