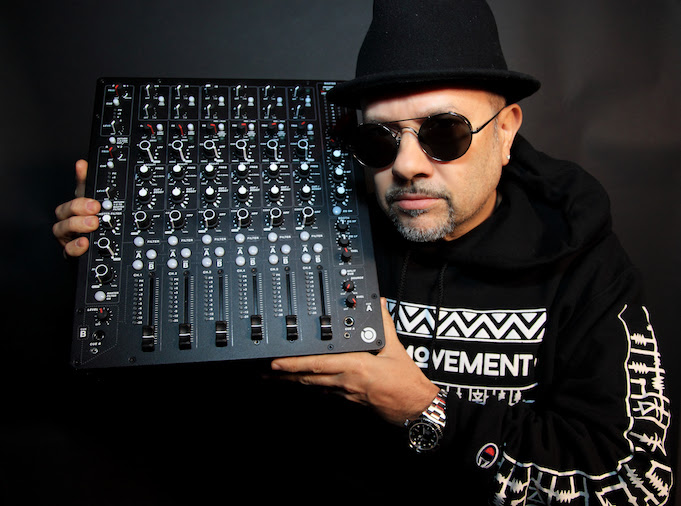 DJ, producer and all round House music legend Louie Vega is revealed as the latest ambassador for the MODEL 1 mixer, the debut instrument from PLAYdifferently. After more than 30 years of using a rotary mixer, the pioneering DJ’s endorsement is the biggest statement yet in the continued rise of MODEL 1’s adoption by the electronic DJ community. Engineered by Andy Rigby-Jones, the mind behind Allen & Heath’s Xone series, and co-designed by Richie Hawtin, MODEL 1 is a performance instrument providing new creative possibilities to artists, and empowering them to PLAYdifferently.

With a career spanning over 30 years at the forefront of global dance music, Louie Vega’s continued popularity and success is testament to a life dedicated to music. Breaking through as a DJ in the mid-80s, with residencies at New York City hotspots like the Devil’s Nest and Studio 54, the dance music innovator is perhaps best known as one half of the iconic Masters at Work duo, alongside partner Kenny “Dope” Gonzalez. Together, they have soundtracked dancefloors the world over and worked with everyone from Michael Jackson to Madonna to Tito Puente and the Black Eyed Peas. As a solo artist, his career is just as impressive, from world touring with his live band Elements Of Life to performing at the Super Bowl and winning the Best Remix Category at the GRAMMYs in 2006. His latest album ‘Starring…XXVIII’ looks set to continue this success, having earned him his 5th GRAMMY-nomination (either solo or with MAW), for Best Dance / Electronic Album at the 2017 GRAMMYs, which take place this weekend.

Regularly performing in world-renowned clubs such as Cielo (New York), Panorama Bar (Berlin), Pacha (Ibiza), and Ministry of Sound (London), the veteran DJ demands the best when it comes to the sound and quality of his gear. Now, after more than 30 years of using a rotary mixer, he has made the decision to embrace the new MODEL 1, crediting the unbeatable sound quality that it offers, having put the mixer through its paces in the club over recent months.

“The MODEL 1 mixer is a great sounding mixer and works like magic at my gigs. All DJs who are in the club recognize how good the room sounds when I’m playing on this mixer. Then they want it too!!! There is so much you can do with it creatively, I’m having fun with it. PLAYdifferently MODEL 1 is the mixer for the future, get on this spaceship early and get yours! Hopefully in the future PLAYdifferently will create a rotary version and I can help in that creation!” – Louie Vega (MAW, GRAMMY Winner)

In switching to the MODEL 1, Louie Vega joins an illustrious list of MODEL 1 ambassadors, including Chris Liebing, Dubfire, Fabio Florido, Hito, Loco Dice, Matador, Nicole Moudaber, Paco Osuna and PLAYdifferently founder Richie Hawtin as they tour the globe with the MODEL 1 mixer, bringing a new level of sound and performance capabilities to revered clubs and music spaces around the world.

“I am delighted to learn that one of House Music’s finest producer DJs, Louie Vega, has been tempted away from his beloved rotaries and on to the PLAYdifferently MODEL 1! Louie was one of the first ambassadors for the Xone:V6 rotary mixer I designed for Allen & Heath back in 2002, so it’s very rewarding that he’s now adopted the MODEL 1, a very different beast indeed, but one with the same analogue heart”. – Andy Rigby-Jones