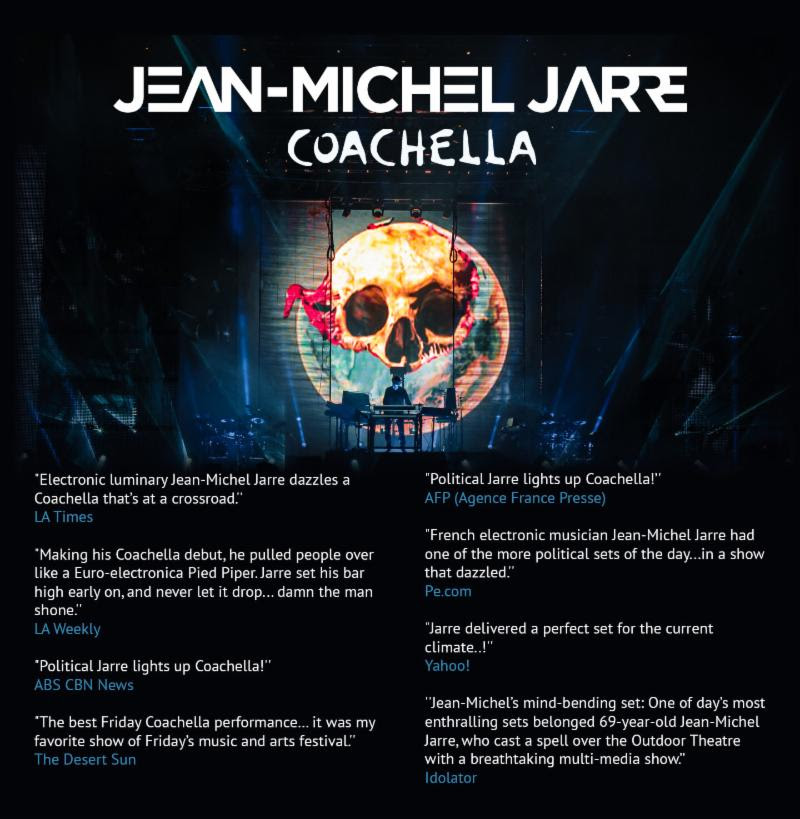 A Laser Harp…keytar…synths upon synths….Southern California’s desert sky will be lit up this spring like never before when prolific and celebrated electronic music pioneer JEAN-MICHEL JARRE returns to the United States to perform his critically acclaimed ‘Electronica’ show at Coachella. JARRE has been one of the pioneering forces throughout the electronic music scene over the last four decades. This year, he is bringing his legendary live show, featuring state of the art production, perception-defying mobile LED panels and immaculate laser lights he personally designed, to Coachella for its U.S. festival debut. With over 80 million albums sold worldwide to date, musicians and contemporary DJs often refer to JARRE’s influence and innovation, not only for his music but also for his singular vision and creation of outdoor concerts experience.  JEAN-MICHEL JARRE’s legendary concerts have attracted Guinness Record-breaking audiences, with his live shows, often, if not always, taking place in some of the most extraordinary settings worldwide. He was the first western musician ever to be invited to perform in post-Mao China, and has also played the likes of the Great Pyramids in Egypt, The Sahara Desert and The Eiffel Tower, in addition to perhaps his most famous performance ever, where he played to a record 3.5 million people in Moscow. All in all, JARRE has held Guinness World Records for the largest live audiences over the continents not withstanding his memorable one-off city-scale concert in Houston in 1986 for NASA’s 25th Anniversary and in a moving commemoration of the Challenger Mission to which over 1.3 million people gathered to share this groundbreaking show at the foot of Houston’s skyline.JEAN-MICHEL JARRE is synonymous with the legendary as he continues to break new ground with each piece of music and live performance.
TroyBoi
Sahara Tent 9:05-10:00 PM 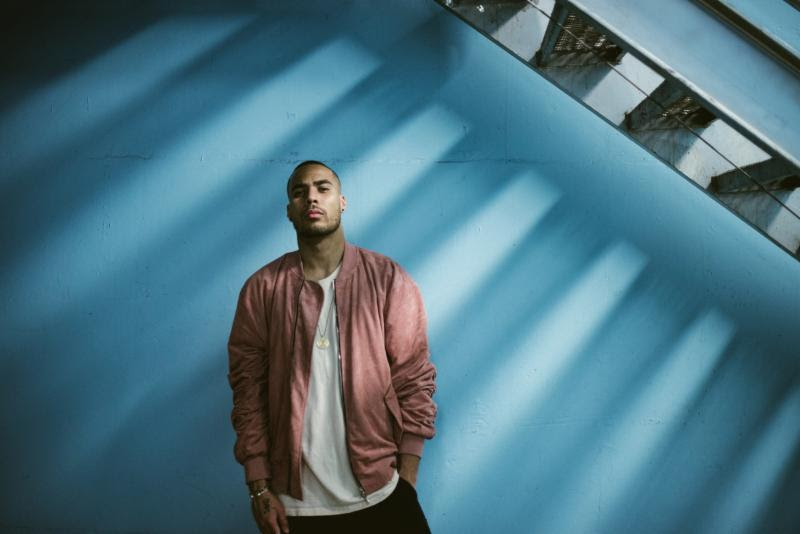 Coming straight out of South East London, rising multi-genre, multifaceted producer TroyBoi-who makes his Coachella debut this year-goes against the grain when it comes to his music. Since skyrocketing onto the scene in 2013, TroyBoi, née Troy Henry, left his distinguished mark on the music world on the strength of his unique original productions which blend multicultural influences and hip-hop finesse built atop versatile, hook-laced, trap-infused beats as heard on his debut album Left Is Right out now via T dot Music. No one else in trap music is doing what he does live-performing an all original music set comprised of new music from Left Is Right, his show is enhanced by aerialists, break dancers and a few live players. At Coachella, he will present a very unique show with special guests planned for each weekend. The 20-track album from one of Billboard Dance’s Artists to Watch in 2017 includes appearances come from Ice Cube on “Look At Me,” “Interlude-Jam Sessions” with his mentor, songwriter-producer Jim Beanz (Empire, The Simpsons, Rihanna), “Hooper” with NY rapper Healthy Chill and the UK’s Nefera and Y.A.S. on “Her.” Also included are some of his more recent menacing productions including “Hooper” featuring Healthy Chill, “Do You?,” “O.G.” and “Mantra,” as well and fresh cuts “B.I.A.,” “Kurta Kente” and “KINJABANG” which has been currently used by America’s Best Dance Crewperformers The Kinjaz.
TroyBoi’s newest production is a remix of Billie Eilish’s “MyBoi”: https://soundcloud.com/billieeilish/myboi-troyboi-remix
Check out this amazing performance from the Kinjaz set to Troy’s music: https://www.youtube.com/watch?v=QJdr3V-w0TI
Listen to LEFT IS RIGHT:
SOUNDCLOUD
SPOTIFY
The Marías
Sonora Stage 3:55-4:35 PM 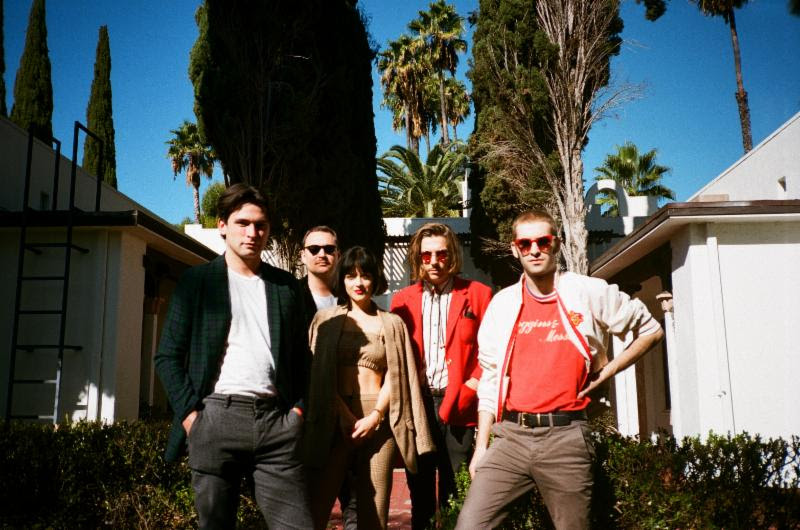 Formed in Los Angeles in late 2016, The Marías are the psychedelic-soul lovechild of L.A. native, Josh Conway (Producer/Drums/Vocals) and Puerto Rican-bred, Atlanta-raised María Zardoya (Lead Vocals/Guitar). A smooth rendezvous of jazz percussion, hypnotic guitar riffs, smoke-velvet vocals and nostalgic horn solos, there’s something undeniably sensual in the group’s dreamlike fusion of jazz, psychedelia, funk and lounge. With María on lead vocals and Josh on drums, the couple is joined by three of their closest friends and fellow musicians: Carter Lee (Bass/Vocals), Jesse Perlman (Lead Guitar/Vocals) and Edward James (Keys/Vocals). Their debut EP, titled Superclean Vol. Ifeatured songs such as “I Don’t Know You” which has over 2.5 million streams on Spotify. NPR‘s Stephen Thompson recently spotlighted THE MARIAS saying: “It’s hard to describe The Marías without using the adjective “smooth” in every sentence…Led by singer Maria Zardoya, the band employs maximal slinkiness in the service of jazzy, gauzy, utterly charming, slyly funky pop.” (March 1, 2018) Recently, Los Angeles Times unveiled a performance video of “Basta Ya” from SUPERCLEAN VOL. I with Randall Roberts noting The Marías‘ “…work is hardly G-rated. Rather, as witnessed in their take on ‘Basta Ya,’ the one-named María sings about a desire so urgent that her body’s suffering. As she does so, the musicians lay out a danceable groove that moves within a realm they’ve described as psychedelic soul music.” (March 1, 2018)
Listen to their latest single “I Don’t Know You” via Spotify, Soundcloud, or iTunes and their debut EP, SUPERCLEAN VOL. I, via Spotify.