The first installment from the extremely watchable and exciting act from Paris, Nadeah & Beki’s ‘Kombucha’ see them channel their love of 90s electroclash to the present. Lifted from the duo’s debut EP ‘ Dream Bitches’ due 6th March 2020, Nadeah & Beki (Aussie born Indian/Serb Nadeah Miranda and Anglo-Syrian Beki Mari) team up with French producer Marc Collin, who redefined the cover version with his world-conquering Nouvelle Vague project. 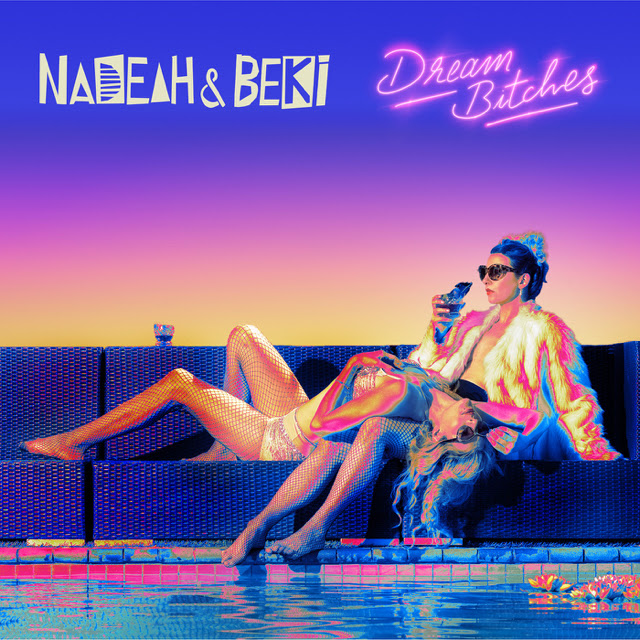 Drawing on a myriad of influences from 80’s post-punk, electro pop and hip-hop, evoking the likes of Peaches and Chicks on Speed with a modern tongue in cheek outlook; evident in the rap-inflected video for ‘Kombucha’ (for which Beki directed) – “swig it, scull it, neck it, down it, chug it/torture chamber in your gullet” – and the psychedelic dancehall shuffle of ‘Lego Hair’ and ‘Idiot Ant’. Nadeah & Beki play off each other’s vocals, or act as a tag team, with the former’s Aussie twang perfectly complementing Beki’s more clipped, British tones.

They say: “Kombucha is an observation on consumerism as a social construct. The video is a critique of identity and female stereotypes while simultaneously being a duo-portrait – a nostalgic throwback, embracing characters, reviving our “girl band” fantasies. It’s a reminder to take ourselves, as well as all the current fads and phobias we subscribe to, far less seriously.”

Both have previously worked with Collin, joining Nouvelle Vague’s rolling revue. In Beki’s case, after moving to London and working with a string of rock bands, she met with Collin at a Nouvelle Vague show and later joined the band. Following which, she and Collin released a dark-wave /neo-industrial album under the name The Living Gods of Haiti, including a collaboration with Penny Rimbaud, founder of seminal punk band, Crass. Similarly, at 18, Nadeah moved to London. She signed with a major label but found the hit-factory mentality less than creative so she founded Brighton-based indie band The loveGods, “We won Radio 1’s best unsigned band, played Glastonbury three times and then I got kicked out of the UK,” says Nadeah. “So I moved to Paris, joined Nouvelle Vague, toured with them for three years and then put out three solo albums under my name Nadeah. I like threes.”

The lightbulb moment for the pair came when Nadeah asked Beki, who is also a director, if she could work on a video – and, as a last minute thought, to guest on a track or two. Says Nadeah,  “I asked Beki to lay down some vocals. As soon as she started I thought, ‘Wow,- we have to make a band”. According to Beki, DreamBitches “has the energy of previous projects but is way more tongue in cheek. We’re more focused on irony and making fun of ourselves and society whilst being political at the same time.”

Nadeah concurs: “Humour breaks down peoples’ guard. I get very bored when I have to be sincere all the time. Emotional ballads and epic rock come naturally to me so I wanted to do4 the opposite. Also I think Marc’s production supports the kooky characters we developed when recording/ writing the songs.”

The EP also sees Collin delivering some of his most dynamic production work to date. “It’s different in the sense where I’ve tried to renew myself as a producer/composer. I started to produce the songs using sample sounds, like I used to do in the 90’s with my AKAI S1000. I tried to forget my musical knowledge and just use sounds, like a DJ, to fit with the top lines and melodies.”

He sounds like he’s having the time of his life, exploring various dance music styles, filling out the gritty soundscape of ‘Kombucha’ with rippling synths and sci-fi undertones, as well as bringing in some of his beloved, ice-and-fire post-punk on the ‘Où Es-Tu?’.

Beki calls it “urban/electro punk. We coined the term bauhaus pop – which we haven’t convinced everyone we can use yet!” Whatever you call it, you’ll be powerless in the face of Nadeah & Beki’s charm offensive.

DREAMBITCHES (EP) will be released 6th March on Kwaidan Records.