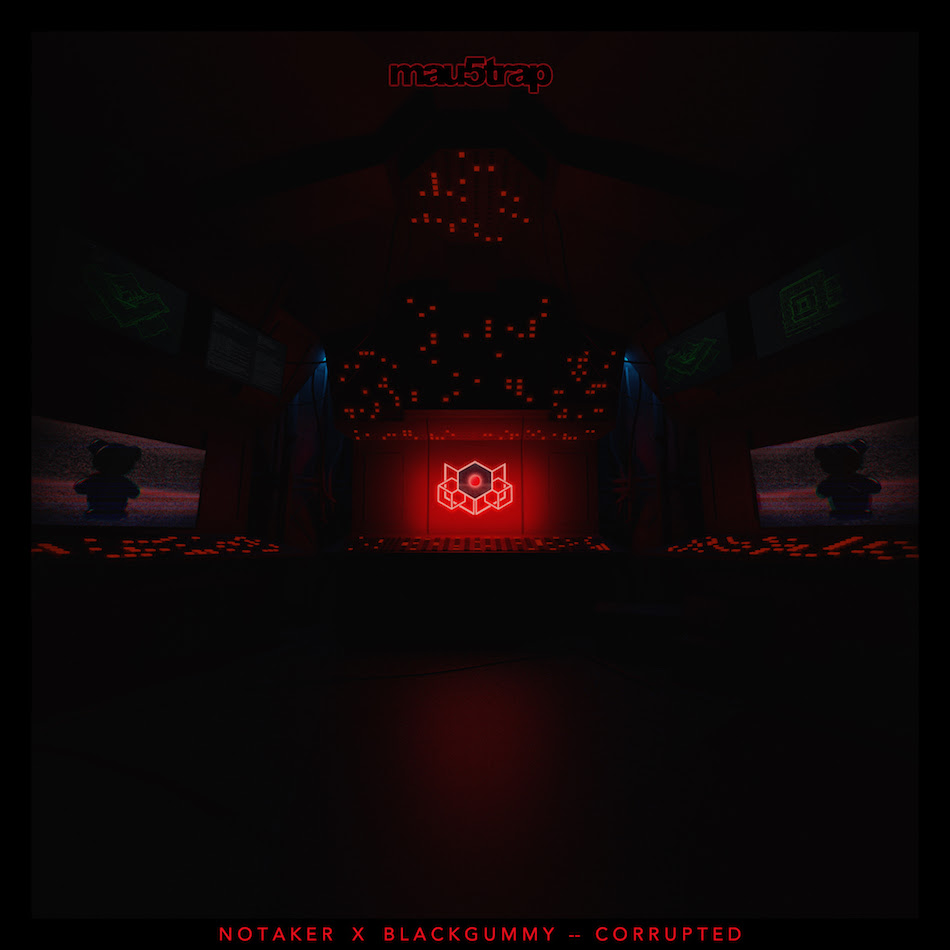 issouri native and bass connoisseur Notaker is prepping for his debut EP release via deadmau5’s iconic mau5trap imprint in just a couple of weeks. To ignite the rollout for the project, Notaker has released a jaw-dropping collaboration with another notable mau5trap star, BlackGummy, titled “Corrupted”. This heavy new offering provides listeners with just a small taste of what’s to come in his forthcoming EP, EREBUS I, which is set to release on July 6th.
STREAM/PURCHASE: NOTAKER & BLACKGUMMY – ‘CORRUPTED’
Following a light-hearted approach on his first 2018 release, ‘Too Smooth’ ft. Grey MTTR, Notaker returns in full force to channel his darker persona with the help of fellow mau5trap veteran BlackGummy. With an ominous synth-lef verse followed by an abyss of bass-drenched sounds, ‘Corrupted’ combines both artists’ signature production styles and leaves listeners begging for more. The glitch-infused track draws parallels to the sentiment similar to that of rising dance sensations REZZ and 1788-L, and alludes to the dark, other-worldly undertone that ties the full EP together.

In divulging into the complete creative process behind the EREBUS I EP, Notaker stated the following:

“The concept behind this EP was to expand on the idea of my Vessel series by creating a story using the tracklist order, mood, and artwork for each song to tell an ambiguous sci-fi / space story about the Vessel. Essentially the Vessel’s A.I. experiences a Fatal System Error after The Vessel travels through a wormhole, the Corrupted A.I. then becomes hostile towards the crew forcing many of the to jettison the Vessel and go into Hypersleep. The remaining crew then cut the power supply to the A.I. and have to travel back through the wormhole without any guidance. Also in the promo mix I spliced in a few audio clips of dialogue from movies that I drew inspiration from for the story and artwork (Interstellar, 2001: A Space Odyssey, and Alien).”
STREAM: NOTAKER – GENESIS EP (MONSTERCAT)
In late 2017 Notaker unveiled his very first full EP through Monstercat, which has amassed a stunning 2 million streams across all digital streaming platforms. His most recent release was dance floor-primed track alongside Grey MTTR titled ‘Too Smooth’ and he was also featured on Monstercat Instinct Vol. 1 with a multitude of impressive releases from Vicetone, SLANDER, Lookas & Krewella, and more. 2018 is shaping up to be a pivotal year for the versatile producer. With a string of releases under his belt, Notaker is sure to craft a sound that fits a universal mold of bliss.

Stay up to date with all of Notaker’s social channels for news on upcoming music, tour dates and much more.