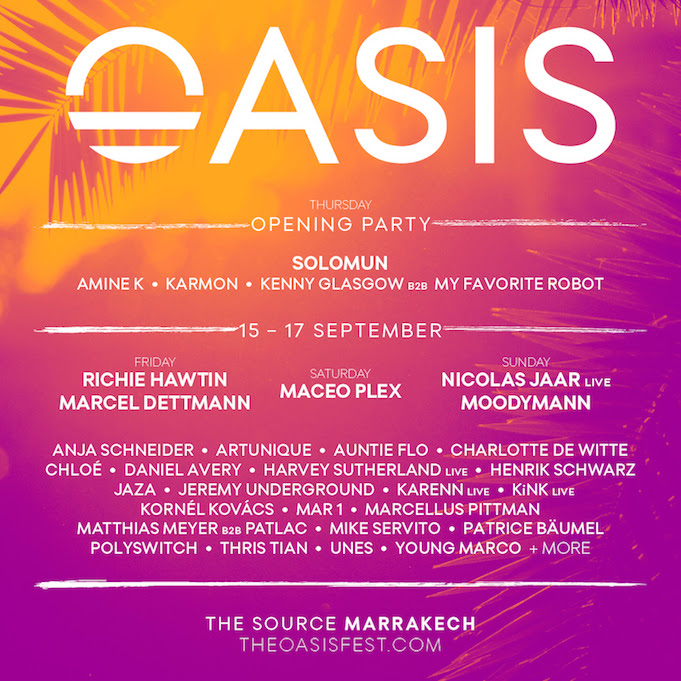 Oasis festival returns to Morocco this September, bringing a world-class music line-up to luxury music resort The Source. Nestled on the outskirts of the bustling city of Marrakech, Oasis has put Morocco firmly on the map as the must-visit festival destination of the moment. Now in its third year, the festival continues to showcase the finest international talent, as well as shining the spotlight on the flourishing Moroccan electronic music scene. The second wave of acts are revealed today, with headline guests including dance music pioneer Richie Hawtin and multi-instrumental producer Nicolas Jaar, along with Henrik Schwarz, Marcellus Pittman, Daniel Avery, Anja Schneider, Unes and more.

Richie Hawtin makes his Oasis debut, with a headline performance on Friday 15th September! The pioneering electronic artist and technological innovator has been a leading figure on the global electronic music scene since the turn of the ’90s. Over the course of his illustrious career, he has founded seminal labels Plus 8 Records and M_nus, produced groundbreaking musical works as Richie Hawtin and Plastikman, and toured the globe with his cutting-edge shows and event concepts like ENTER. and CONTAKT.

Chilean-American musician Nicolas Jaar will bring his captivating live show to Oasis on Sunday 17th September. From 2011 debut album Space Is Only Noise, to most recent LP Sirens, the multi-instrumental producer continues to make sophisticated electronic music that enraptures critics and fans alike. His live performance at Oasis 2017 is guaranteed to be a true festival highlight.

With sun-kissed days and starlit nights soundtracked by an impressive league of house and techno talent in the luxurious surroundings of The Source, Oasis is made complete with stage-side swimming pools, daily yoga sessions, lush gardens, adventures in Marrakech, and stunning views of the nearby Atlas Mountains. Oasis brings the finest slice of festival paradise to the ancient world of Marrakech, creating a truly unique cultural experience.

“Oasis has expertly combined all the ingredients to become world famous.”
Mixmag

“The hottest new festival on the market”
DJ Mag

“Oasis is exactly what a dance festival should be: fun, inclusive, gorgeous, and perfectly curated. It was prepared with dancers in mind.”
Thump

“A house music festival in Marrakech that brings the template of the civilised, sun-kissed rave to north Africa”
The Guardian

“Set against the sun kissed backdrop of Marrakech, Oasis makes for a pretty ideal way to spend the final few days of summer.”
London Evening Standard