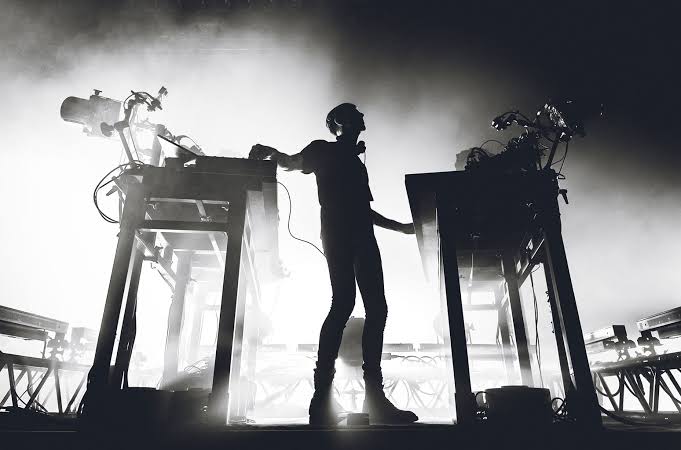 RICHIE HAWTIN today releases CLOSER, an interactive mobile app created in partnership with Telekom Electronic Beats, allowing users innovative new ways to manipulate and engage with his recently released audiovisual mix album CLOSE COMBINED (GLASGOW, LONDON, TOKYO – LIVE). The app also includes an exclusive audiovisual edit of his 2017 performance from Bonusz Festival in Budapest entitled ‘BUDAPEST CONDENSED,’ the first of many classic Hawtin performances to be released exclusively inside the app.
The CLOSER app provides two core features for the user to dive into: ON-DEMAND MIXING and future INTERACTIVE LIVE STREAMS. An overlaid mixer panel allows users the ability to deconstruct and manipulate individual audio channels of Hawtin’s mix including drums, synths, effects and decks. The app’s unique three-panel vertical layout allows fans to view and toggle between distinct HD camera angles from the CLOSE live performances – crowd view, stage setup and equipment close-ups – bringing the audience closer to the creative impulse that drives Hawtin’s performance. Hawtin’s own innovative RADR technology provides real-time track information within the app experience.
‘CLOSER’ bridges the gap that currently exists between the live experience of electronic music and the digital experience online. The experience will continue to evolve into the future, when the app’s LIVE STREAM capability is activated, offering users the ability to interact with live performances in the same way they can currently with recorded shows.
Richie Hawtin states: “I’ve always been interested in the intersection of music and technology and the CLOSER App is the perfect marriage of the two, which I hope gives new insight into how I play and create my unique Hawtin sound. In a world filled with DJs who are happy with the status quo of electronic music performance, I strive to push forward, challenge myself and hopefully inspire the next generation of Techno performers to continue to go beyond the norm.”
“Richie Hawtin and Telekom Electronic Beats both focus on creating experiences that can help people make meaningful connections through music. That’s what our interactive mobile app CLOSER is all about.“ – Ralf Lülsdorf, International Market Communications Deutsche Telekom
Richie Hawtin is one of the most innovative and creative minds of our time. Primarily known for being one of the world’s biggest techno DJs, he’s expanded the boundaries of the artform using and developing state of the art technology, blurring the line between man and machine, on stage and in his seminal mix albums (the DE9 series, Decks EFX&909, CLOSE COMBINED).
Following a range of artist monikers like F.U.S.E. or Circuit Breaker, Hawtin’s best-known alias next to his real name is Plastikman. The Plastikman sound has developed through early connotations of acidic techno and extreme levels of energy to sonic experiments in futuristic-rhythms and off-world ambience. His driving force is innovation and experimentation in every one of his projects whether in the realm of music, technology, art or design.
Hawtin’s omnipresent impact on the music industry demonstrated in four examples:
“Richie Hawtin Renaissance Man Of Techno On Bridging Technology And Creativity“
– FORBES
Final Scratch, Traktor
Richie was the driving force behind digitization of DJing by introducing the Laptop to the DJ booth.
The Final Scratch technology enables DJs to play and control digital music files with a dedicated timecode vinyl disc. The Final Scratch idea snowballed and various brands started  developing digital DJ controllers.
Co-founder of Beatport
By co-founding the digital music shop Beatport, Richie revolutionized the way DJs (and later everybody) access and purchase music. The digital DJ and music revolution leaped ahead with this innovation.
PLUS 8 EQUITIES
Richie leads an investment fund with his artistic community and extended industry network, to help develop  music technology innovation, assisting LANDR, Splice, Endel, Subpac and a handful of others.
MODEL 1 Mixer/ PLAYdifferently
A collaboration between Richie Hawtin and Andy Rigby-Jones (former Allen&Heath). This mixer features characteristics of both, studio and DJ mixer. With a design and functionality which is significantly different then any previously built device, this innovative performance instrument is a class of its own. https://playdifferently.org/model-1/
The interactive app CLOSER is available for free via iOS App Store and Google Play
www.richiehawtin.com