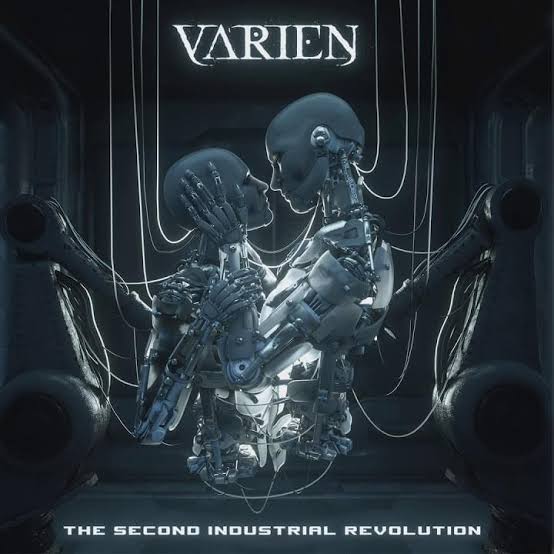 “Honestly, referring to (Varien) as a “vanguard” is a HUGE understatement” Earmilk

So starts the manifesto of one of America’s most influential, underground, electronic producers. The critically-revered, enigmatic and often elusive Nick Kaelar, aka Varien, emerges from the depths of his studio with the stunning new long-player ‘THE SECOND INDUSTRIAL REVOLUTION’.

Daring, uncompromising and utterly raw, ‘THE SECOND INDUSTRIAL REVOLUTION’ is Varien pushing the envelope, even by his standards. Bristling with emotion and fizzing with an obvious rage, the album was part-written at a time when Varien was, in his own words, “in the pits of the deepest depression”, and partly during his journey out of that. The album draws influence from his rediscovery of the worlds of hip-hop, rap and pop, woven together on a background of anarchistic punk sentiment, a composition rich in texture and artifacts.

Speaking about the album, the Florida-based Varien said: “I’m just so physically sick and exhausted of plastic people living plastic lives. We’re better than that; give me the imperfect, the marginalized, the weird. Throw away the shrink wrap and throw yourself into the abyss with me.”

At its essence the album is a celebration of this “imperfect”, exalting the artistic beauty and freedom that lies in surrender to that. From the very start of the album, in titular single ‘THE SECOND INDUSTRIAL REVOLUTION’, there is a grainy, clipping quality to the production this is far removed from the polished normalcy of much of today’s electronica, carried through as the album begins its descent into darkness. The deep tones and immense vibrations of lead single ‘SOHEAVYSOHOLLOW’ provide a rich backdrop for Tori Letzler’s eerie, ethereal vocal, suspended with deft delicacy over rolling percussion and breaking rhythms. Inspired by Varien’s appreciation for Timbaland’s work, ‘YAKUZA WHOREHOUSE’ is as short as it is startling, just 1 minute 44 seconds long. The even shorter follow-up ‘MATRICULATED’ is an angry burst of frenetic, industrial-electronic energy, the pace unrelenting; the intensity of ‘FIGHT_CLUB’ thrusting the listener further inside the spiralling climax of Varien’s sentiment.

Yet in this world that Varien weaves around us with furious, breakneck pace, like glimmers of light that thread through the dim streets of his soundscape come moments of light and faint peace that juxtapose themselves against the album’s heavier edits. ‘IDONTBELONGHERE’ channels Asian-inspired melodies and instrumental sections; ‘BLESSINGS UNTO THE MACHINE’ is tender and fragile, at its heart a synth-laden, electronic love story; ‘PASCAL’ is hopeful in its melody, elements of Varien’s K-Pop work as Nick Kaelar woven into twitching rhythms and strange, reverberating throat-singing.

Though the listener never quite fully emerges from the dusky twilight of Varien’s ‘THE SECOND INDUSTRIAL REVOLUTION’, there is a definite sense of catharsis by final track ‘CLAIRE’S SONG’ that perfectly rounds off this latest chapter in Varien’s creative journey. His is a sonic and creative journey that continues to captivate, enthrall and inspire thousands of followers around the world, a flowing tapestry of sound and emotion woven together using fearless imagination and a steadfast refusal to conform to the sanitized parameters of everyday life.
VARIEN ‘THE SECOND INDUSTRIAL REVOLUTION’:

Adored by critics and followed with a feverish, almost cult-like manner by fans, elusive US electronic producer Varien – aka Nick Kaelar – continues to push the boundaries of his chosen genres from his position within the shadows of American musical counter culture. His is a unique space, flexing across countless areas within music but continually refusing to compromise or dilute his work.

Born and raised in Tampa, Florida, Varien’s early career was heavily influenced by metal and rock, experimenting at high school with grindcore, metalcore, screamo, hardcore and power metal before studying the composition and theory of music as part of his jazz band class. From his first steps into electronic music production in 2009, it was also increasingly evident that music from the worlds of gaming and film had crept into his musical psyche. Varien himself cites Shin Megami Tensei, Final Fantasy, Metroid and the work of the Wachowskis as dominant factors in building his own sound.

His first public production surfaced in 2010 on the back of a slowed-down remix of Justin Bieber’s ‘U Smile’ – the quite literally titled ‘Justin Bieber 800% Slowed Down’ – covered by media around the world including MTV and Entertainment Weekly. In 2011 he released three singles under his Halo Nova alias on Monstercat – ‘Triceratops’, ‘The Force’ and ‘Totally Radical’ – before turning towards the Varien moniker to remix Ephixa’s ‘Division’. It was the Varien name that was to stick, Kaelar using it to release a compilation album of trailer cues for TV, film and video licensing in 2013 called ‘Pick Your Poison Vol 1’, followed in 2014 by a second volume.

Varien’s natural ability to produce sweeping and expansive compositions led to a huge influx of licensed material. After teaming up with Two Steps From Hell on a private trailer cue compilation called ‘Open Conspiracy’ he went on to create music for ‘300: Rise Of An Empire’, ‘Bones’, ‘The Purge: Anarchy’, ‘Face Off’, ‘America’s Next Top Model’, ‘Planetside 2’ and ‘Monsters: Dark Continent’. Meanwhile his relationship with Monstercat continued to grow with a sweeping run of releases from 2011 to 2016 that individually clocked up millions of views on YouTube and introduced him to a wider international audience. Release highlights included his ‘Valkyrie’ trilogy: ‘Bloodshed’ (2014) featuring Laura Brehm, ‘Lacuna’ (2014) featuring Cassandra Kay and ‘Atonement’ (2015) with Brehm returning to reprise the vocal role. Interspersed among the three tracks Varien also dropped the hugely influential EPs ‘Mirai Sekai’ (2014) and ‘My Prayers Have Become Ghosts (2016), and his 2015 long player ‘The Ancient & The Arcane’. The album was acclaimed upon release, with Dancing Astronaut hailing it “a cinematic masterpiece”.

In 2017, in a move that shocked fans, Varien pulled back from all production work, deleting his social accounts and removing himself entirely from view. He later revealed in a series of interviews with US site EDM Sauce that the move was predominantly motivated by the negative psychological impact of social media, telling the publication he “needed a break from it”. It wasn’t until a year later, via a YouTube message on his channel – which had remained intact – that he announced his return with a run of self-released material including ‘Blood Hunter’, ‘Oh, Sparrow’, ‘Claws’, ‘Eventide’ with Diskord and the Swarm co-production ‘Never Ending’. By the end of 2018 he was back in full flow with his third EP, ‘Death Asked A Question’, released on Most Addictive and featuring the singles ‘God, The Misanthrope’, ‘Whore Of Babylon’ and the titular ‘Death Asked A Question’. The EP once again received mass critical acclaim with Dancing Astronaut calling him “a true mastermind of the electronic realm” and “a figurehead for a shadowy genre all his own” while EDM placed him “on the same playing field as Nine Inch Nails frontman Trent Reznor’.

The return to production heralded a new burst of creativity from the American. As Nick Kaelar he continued to build on his reputation for producing K-Pop hits, writing #1 hits ‘X Phenomenon’ for MONSTA X, ‘Scientist’ for K-Pop band VIXX, ‘The Crown’ for SUPER JUNIOR, contributing arrangements and remixes for films such as Replicas and John Wick 3, and working on multiple video game soundtracks. As Varien he began working intensely on a second long-player, one that was yet again to be influenced by the dark shadow of mental health. Describing himself as being “in the pits of the deepest depression,” ‘THE SECOND INDUSTRIAL REVOLUTION’ eventually proved itself a cathartic vehicle for the American, lifting him through the dark times and culminating with a physical relocation to the Northern European country of Finland. With a release date set for December 2019 and new material already in the works, Varien looks set to continue through into 2020 with a renewed sense of purpose for the next chapter of his musical journey.