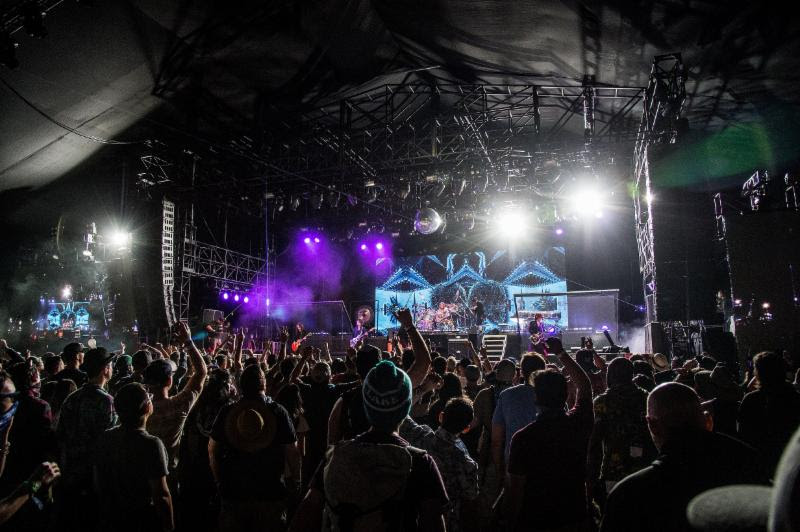 “X Japan landed in the Mojave Tent to deliver on the flash and melodrama that has made them hugely popular across the globe. …There were hard rock explosions and teary ballads… ‘Jade’ began with a speed metal riff and geysers of pyro, then shifted into an emotional glam melody and lyrics sung in English. The star behind the drums and piano was band mastermind Yoshiki, shirtless and wearing a leather neck brace. He ended the night with the band’s traditional show of unity, shouting ‘We are! We Are!’ and their followers responding with a rousing ‘X! X!’”

(Los Angeles, CA: April 16) Legendary Japanese rock group X JAPAN made their Coachella Music and Arts Festival debut last Saturday night (April 14) as the first Japanese artist to headline a stage at the annual festival in Indio, California.  The group’s powerful and dramatic performance at the festival was heralded as “A fantastically bombastic show” by YAHOO (4/15/18) and “a masterful rock & roll performance” LA WEEKLY (4/15/18) marked their first major concert of 2018 since headlining SSE Wembley Arena in London last year.
“Coachella is not only one of the biggest festivals in the world, but it’s edgy and fashionable,” says YOSHIKI, leader of X JAPAN. “I love the style and I’m heavily influenced by David Bowie, so we wanted to do something unusual and exciting. It was an honor for us to rock Coachella this year and we’re looking forward to doing it all again next Saturday with even more surprises.” 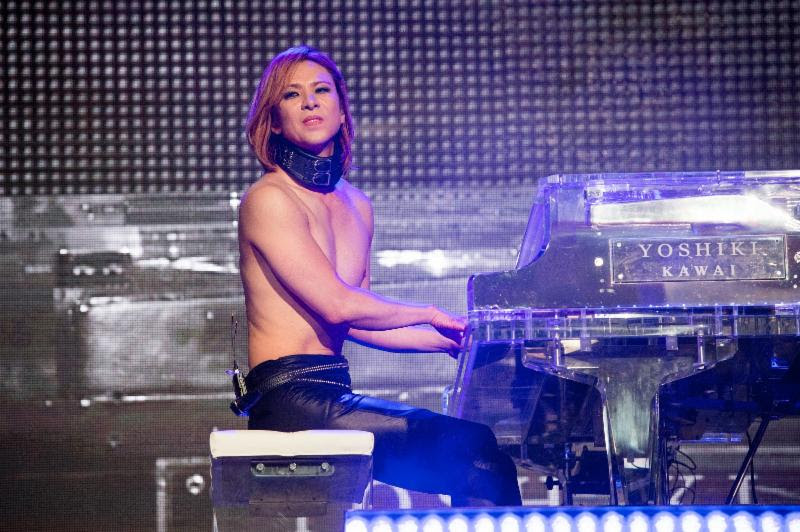 Tuesday, April 17, tune into 95.5FM KLOS LIVE, at 1:00PM PT to hear YOSHIKI chat with Steve Jones of the Sex Pistols on his afternoon show, “Jonesy’s Jukebox.” All can listen live, worldwide to “Jonesy’s Jukebox” online via the KLOS websitewww.955klos.com or watch the KLOS Facebook Live feed at:
https://www.facebook.com/955KLOS/. The show will also be archived HERE and onYouTube. 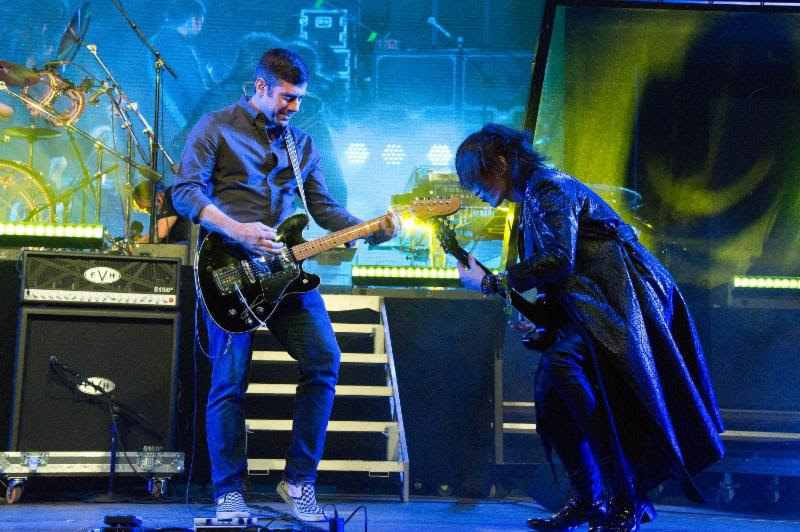 On Wednesday, April 18–between the two Coachella weekend performances–X JAPANhas partnered with the GRAMMY® Museum (800 W Olympic Blvd, Los Angeles, CA 90015) for a screening of their award-winning documentary WE ARE X. The sold out event will be followed by an intimate discussion with YOSHIKI and Lyndsey Parker, managing editor of YAHOO Music. WE ARE X chronicles the exhilarating, tumultuous and unimaginable history of the band over the past three decades–persevering through personal, physical and spiritual heartache–the film culminates with preparations for their breathtaking reunion concert at New York’s Madison Square Garden. Noted as a “fascinating and assured documentary” by the New York Times, WE ARE X won awards at the Sundance and SXSW Film Festivals followed by theatrical premieres in over 20 countries and a worldwide chart-topping soundtrack. Watch the trailer for WE ARE X: https://youtu.be/T3yJhsrgg4g. Note: Media review tickets are available upon request HERE.
X JAPAN–the most successful rock group in Japanese history–has sold over 30 million albums, singles and videos combined, and has sold out Japan’s 55,000-seat Tokyo dome a record 18 times captivating a wide range of admirers as Sir George Martin, KISS, Stan Lee, and the Japanese Emperor—all while pioneering a spectacle-driven style of fashion and visual rock called Visual Kei, a one-of-a-kind cultural phenomenon. A testament to the band’s groundbreaking success far and wide, X JAPAN–one of the only rock acts performing at Coachella–was named alongside Beyonce and The Weeknd in the Top 3 most-anticipated acts to catch at Coachella 2018 HERE. 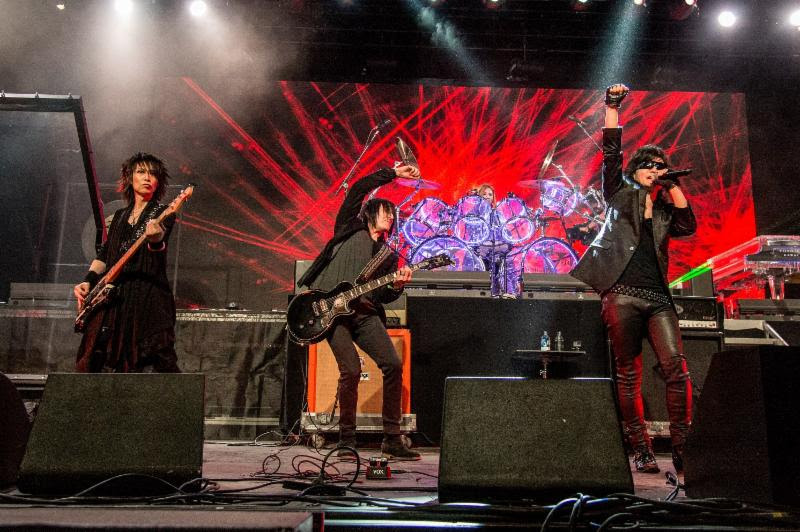 X JAPAN, bullets: http://www.xjapan.com/Bio.html
YOSHIKI, bio: HERE
Band photo: HERE
Videos:
Stage dive: HERE
Coachella Promo: HERE
Drum Solo Vid​eo: HERE
X JAPAN:
Website: http://www.xjapan.com
Facebook: https://www.facebook.com/XJapan
Twitter: https://twitter.com/xjapanofficial
Instagram: https://www.instagram.com/xjapanofficial
YOSHIKI:
Website: http://www.yoshiki.net
Instagram: https://www.instagram.com/yoshikiofficial
Facebook: https://www.facebook.com/YoshikiOfficial
Twitter: https://twitter.com/yoshikiofficial
YouTube Channel: https://www.youtube.com/user/yoshikiofficial
About X JAPAN:  X Japan is the most successful rock group in Japanese history. Led by composer, drummer, and pianist Yoshiki, the band has sold more than 30 million albums, singles, and videos combined, sold out Japan’s 55,000-seat Tokyo Dome 18 times, and played to millions of fans around the world. In the band’s early days, their look and sound sparked a global interest in the Japanese cultural rock phenomenon “Visual-Kei”, a wild fashion and music movement X Japan pioneered that spread worldwide. In 1997, at the height of their success, the band broke up. Four months later, Hide, X Japan’s original lead guitarist, was found dead in his Tokyo apartment. At his funeral, more than 50,000 fans came to mourn his passing. In early 2007, Yoshiki and vocalist Toshi reunited, and later that year X Japan officially reformed. The band launched its reunion in 2008 with 3 nights at the Tokyo Dome. In 2010, X Japan performed for the first time at Lollapalooza in Chicago. Immediately following the festival, X Japan played the biggest concert in its history, selling out two consecutive shows at Japan’s Nissan Stadium, filling 140,000 seats. The band then launched their first North American tour, selling out across the U.S. and Canada. In June 2011, X Japan launched a 14-city world tour across Europe, South America, and Asia. In 2012, X Japan was the first Japanese band to win “Best International Band” at the Golden Gods Awards. In 2014, X Japan headlined a colossal show at New York’s famed Madison Square Garden. The documentary film We Are X, chronicling the history of X Japan, premiered at the Sundance Film Festival in January 2016 and won the award for Best Editing. The film then won an award at the SXSW Film Festival, followed by a worldwide release in over 20 countries and 27 international film festivals. In January 2017, band leader Yoshiki held 2 sold-out concerts at Carnegie Hall, performing original classical compositions and orchestral versions of X Japan’s songs with the Tokyo Philharmonic Orchestra. The We Are X Original Soundtrack was released on March 3, 2017, hitting #1 on the UK Rock Chart and dominating music charts worldwide. The following day, X Japan headlined a live concert at Wembley Arena in London. In May 2017, the band’s future was threatened when Yoshiki was forced to undergo emergency neck surgery, requiring artificial disc replacement after years of intense drumming. In December 2017, the We Are X DVD, Blu-ray, and vinyl soundtrack LP were released, topping sales charts worldwide. X Japan recently announced the release of the band’s first new studio album in over twenty years, which will be available worldwide in 2018. Coachella 2018 will mark not only X Japan’s return to the U.S., but Yoshiki’s return to playing drums since his surgery. The current line-up of X Japan is YOSHIKI (drums/piano/composer), TOSHI (vocals), PATA (guitar), HEATH (bass), SUGIZO (violin/guitar).