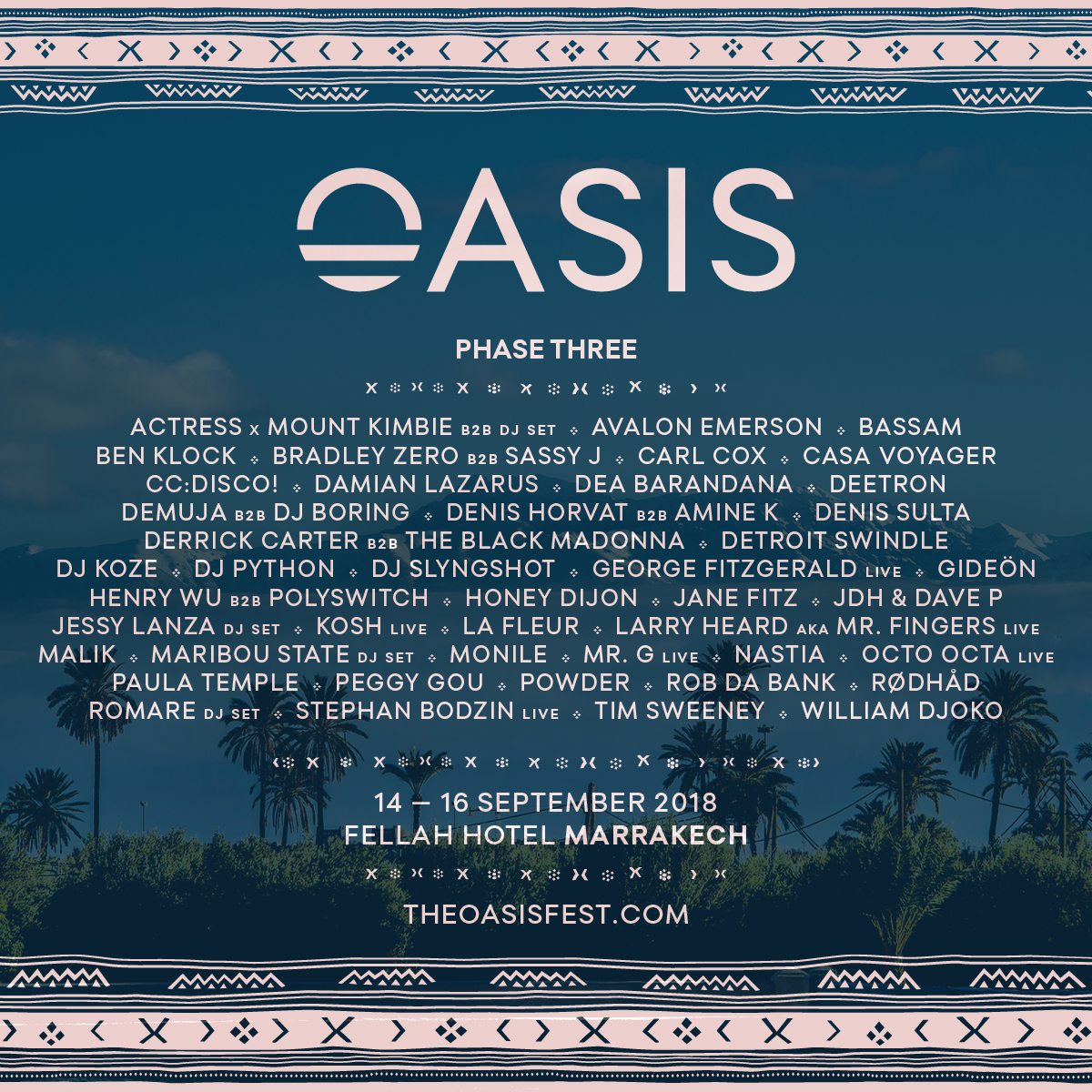 JOURNEY TO MARRAKECH FOR THIS SUMMER’S MOST-ENTICING DESTINATION FESTIVAL WHICH FEATURES JESSY LANZA, MOUNT KIMBIE, PEGGY GOU, THE BLACK MADONNA AND MUCH MORE

Oasis Festival is truly unique in that it mixes an authentic cultural experience with a world-class soundtrack, traditional local customs and friendly hosts. It all goes down at the magical Fellah Hotel at the foot of the Atlas Mountains with tropical gardens, palm trees, cacti and sun-soaked swimming pools all backed by breathtaking vistas. Bringing something fresh to the region and offering you the chance to party under the stars or warm summer rays, there are—for the first time this year—three stages at Oasis Festival, and each one offers an immersive experience like no other.

Chief amongst these latest names is Ben Klock, the techno heavyweight with ties to Berghain, Ostgut Ton and his own influential Klockworks label. Then there is desert house shaman Damian Lazarus who runs the Crosstown Rebels empire, Bestival founder and encyclopedia of all musical forms, Rob Da Bank, and a special live set from longtime techno favourite Stephan Bodzin, who is unquestionably one of the best in the game. A further live set will also come from George Fitzgerald, whose exceptional latest album All That Must Be features collaborators including Bonobo and Lil Silva.

German’s razor-sharp lo-fi house producer DJ Slyngshot also lines-up with others like Bali based rare psych and forgotten euro B-side lover Dea Barandana, who Gilles Peterson recently said played the best set he’d seen in ten years. Add in JDH & Dave P, who hail from New York and Philadelphia and run the FIXED parties, plus Casablanca label Casa Voyager, and you have a diverse yet coherent line-up of passionate selectors who’ll take you on a real musical trip.

With this latest wave of names, Oasis Festival 2018 is shaping up to be an utterly essential date on the festival calendar.

For a reminder of what went down last year, check the Oasis 2017 Aftermovie.

Oasis 2018 takes place from 14th – 16th September 2018. 3-day festival tickets from 180€ are on sale now. Book your place and keep up to date with all of the latest news at theoasisfest.com.