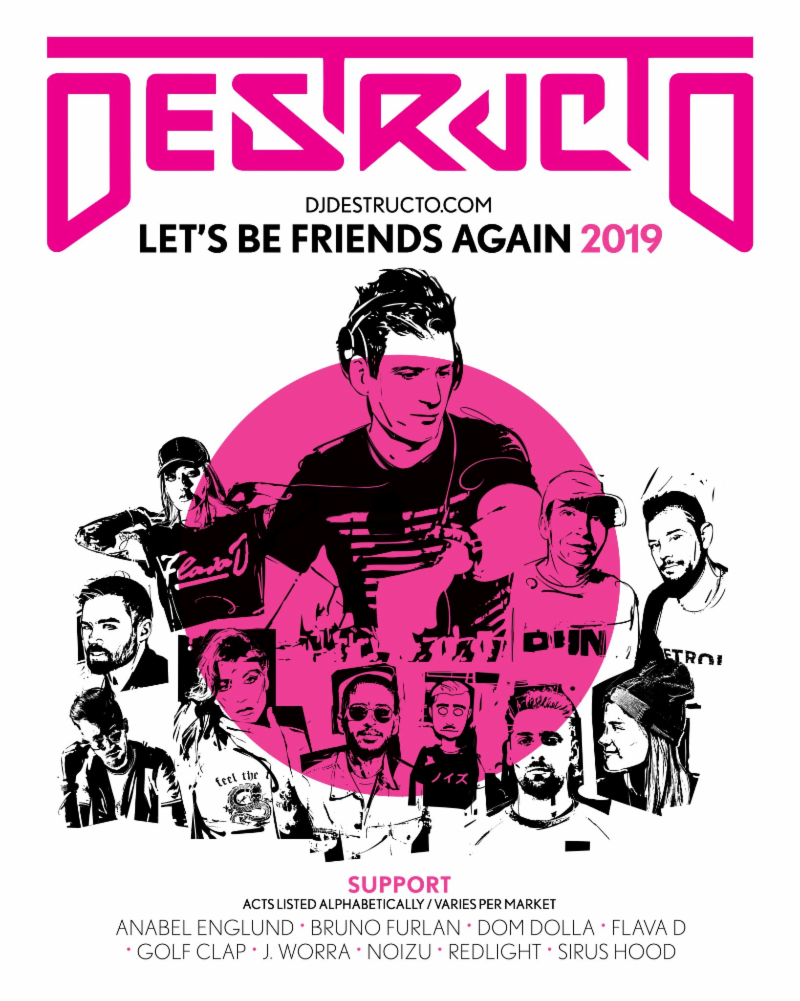 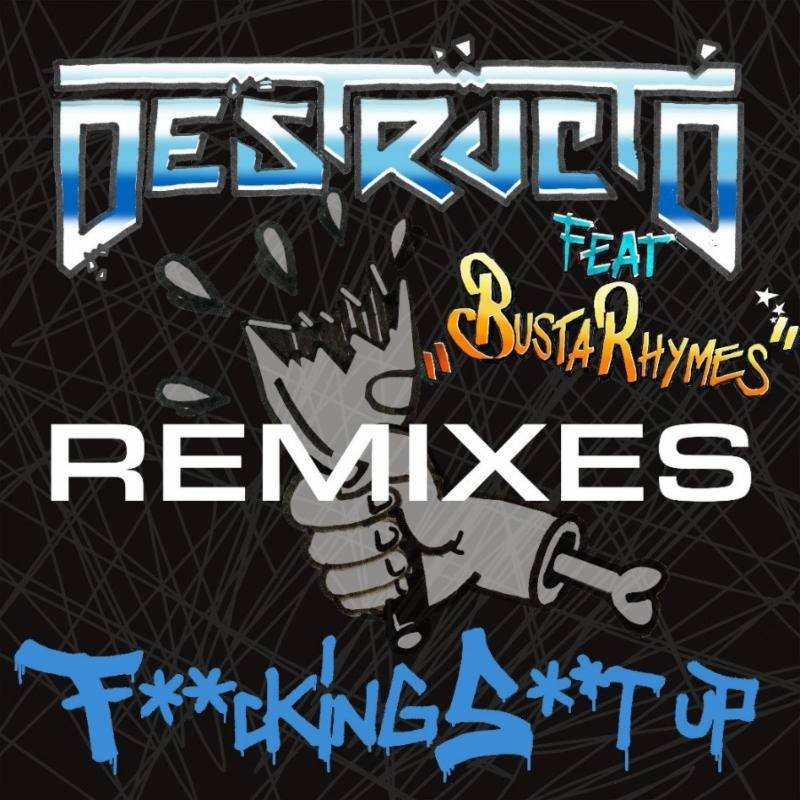 As he prepares to launch his inaugural sailing of the electronic music cruise FRIENDSHIP onDecember 11, DESTRUCTO has today (December 7) announced details of his headlining“Let’s Be Friends Again” tour set to kick off January 11 In Chicago, IL. Tickets are on sale now here: http://www.djdestructo.com/#tour.
DESTRUCTO is no stranger to introducing fans to the newest in what’s cool in music, whether it’s through his own studio productions (check out more below about new remixes of his Busta Rhymes‘ featured track “F**king S**t Up”) or his personally curated music events like All My Friends and FRIENDSHIP (which sold out in a record two days). When he goes out on tour it’s no different-in the past he introduced audiences to artists through support slots like REZZ,Fisher, Sita Abellan, CRAY, Anna Lunoe and many more. On “Let’s Be Friends Again,”DESTRUCTO welcomes new friends Redlight, Bruno Furlan, Flava D, Golf Clap, Anabel Englund, Sirus Hood, J. Worra, Noizu and Dom Dolla.

Remaining true to the message of “Let’s Be Friends,” fans will be exposed to several exciting new artists throughout the tour as support to DESTRUCTO. Sirus Hood is a tech/deep house producer from Paris who has been a favorite amongst the Dirtybird Records’ artists. J. Worrais a house/techno producer from Los Angeles who can also be found aboard FRIENDSHIP next week. Redlight is a producer from London, best known for infectious house tracks like “Zum Zum” and “Get Out Of My Head.”

Noizu is a new house extraordinaire who has released on OWSLA and Confessions. The producer has also lent a hand in remixing for DJ Snake, Valentino Khan and Tchami. Hailing fromSão Paulo, Brazil Bruno Furlan will showcase techno and house sounds with an international flair. Flava D is a popular DJ/Producer from South London who has an eclectic sound that spans from house to bass and garage.

Golf Clap who played an unforgettable set at All My Friends this past summer, bring a unique spin to house music. This past year they have remixed Louis The Child, Zhu & Tame Impala and more. Anabel Englund is a Los Angeles-based singer-songwriter who is best known for collaborative works with Hot Natured and MK. Dom Dolla is an Australian house music producer. His collab with Torren Foot was nominated for the ARIA award for beset dance release of 2017 with “Be Randy.” His work has reach #1 on the Australian club charts multiple times.

Alongside the tour news, DESTRUCTO comes with two new remixes of “F**king S**t Up,” his infectious collaboration with one of rap’s most legendary MC’s Busta Rhymes. Trap-dub festival favorite TroyBoi has put his own heavy twist on the song. His take combines blaring synth screeches and heavy trap snares to flip the track to a fiery festival banger. DESTUCTOhas lent his hand in re-creating the track with his classic G-House infused sound.
Listen to “F**king S**t Up” Remixes here: https://Empire.lnk.to/Fuckingshitup
Check out the original now at: https://Destructo.lnk.to/FKNGSHTUP
The “Let’s Be Friends Again” Tour dates, cities and corresponding support acts are: 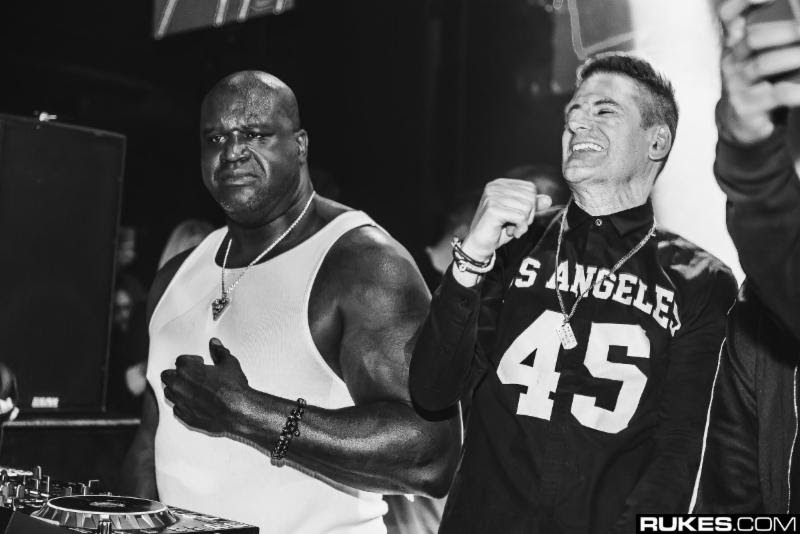 Shaq & DESTRUCTO from 12/1 Los Angeles Show @ Avalon
Photo Credit: Rukes
About DESTRUCTO:
Since 2011, DESTRUCTO (Gary Richards) has dominated the dance floor on his own terms. He went from the acclaimed Technology EP (2012) and Higher EP (2013) to high profile remixes for artists as diverse as Depeche Mode, Giorgio Moroder, Major Lazer, Rob Zombie, Digitalism and more. 2014 saw the precision-guided producer in the realm of g-house (where rap melds with house music) introduce his singular solo style with the West Coast EP, boasting collaborations with YG, Ty Dolla $ign, Problem, Too $hort, Warren G and Kurupt.  Along the way, he’s touched down for shows everywhere from Australia and Fiji to Tokyo and Ibiza in addition to crisscrossing the country on alongside the likes of D.R.A.M., E-40, iLoveMakonnen, Anna Lunoe, Wax Motif, REZZ, Felix Da Housecat and more.  Released in early 2017, the RENEGADE EP features collaborations with E-40 and Too $hort, Ty Dolla $ign & iLoveMakonnen, Pusha T & Starrah, Problem and Freddie Gibbs.  DESTRUCTO‘s latest releases “Bassface,” “Loaded” featuring Yo Gotti and “Shots To the Dome” with Gerry Gonza are out now on HITS HARD.
Beyond the dance floor, DESTRUCTO Presents AMFAMFAMF can be heard weekly every Thursday night at 6pm pt on Diplo’s Revolution channel 52 on SIRIUS XM.
For more information on DESTRUCTO, visit:
djdestructo.com
https://www.facebook.com/destructoamf/
https://twitter.com/destructoamf
https://www.instagram.com/destructoamf