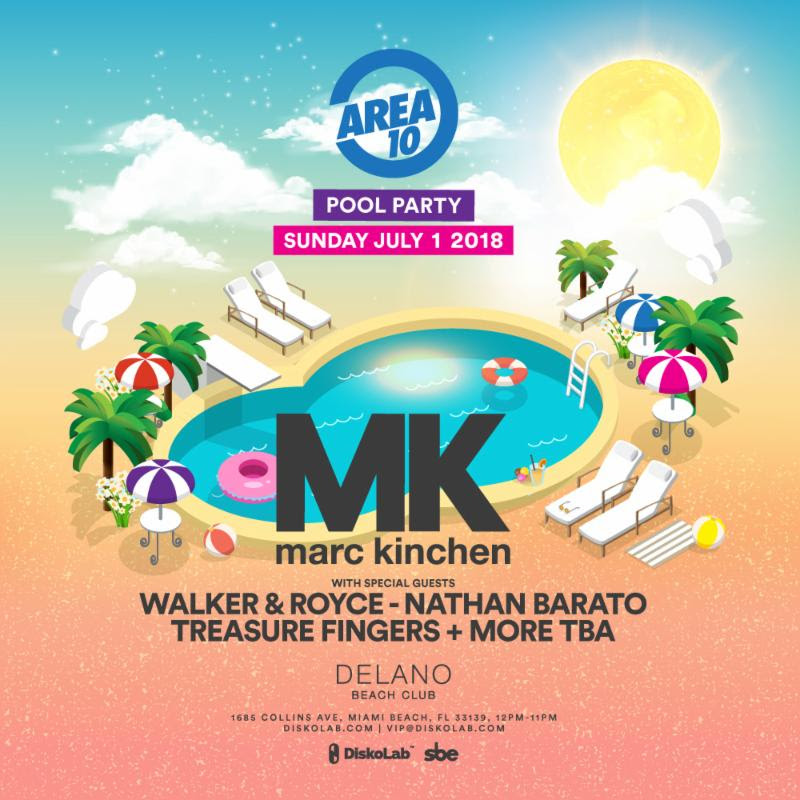 AREA 10 POOL PARTY
WITH FRIENDS WALKER & ROYCE, NATHAN BARATO
AND TREASURE FINGERS
TICKETS GO ON SALE  (JUNE 6) HERE
From LA to Dublin, from Aberdeen to Bristol to Ibiza and straight to the beaches of Florida we are excited to announce that MK will return to Miami this summer to celebrate Independence Day weekend and the continued success of his international hit “17” (Area10/Ultra Music).  He returns with his  Area 10 Pool Party Sunday, July 1 at Delano Beach Club.  MK will return with his Area 10 Pool Party Sunday, July 1at Delano Beach Club.  Teaming with Miami’s Diskolab, MK will bring friends Walker & Royce, Nathan Barato, Treasure Fingers and more to be announced together for an afternoon of quality house music poolside at one of South Beach’s chicest daytime party spots.  Tickets go on sale tomorrow, June 6 at https://www.tixr.com/pr/mk/8716.
A leading name on the international house music global scene for over two decades, Detroit’s  MK (Marc Kinchen)–who currently appears on the cover of the North American edition of DJ Mag–continues to entertain and inspire crowds not only with “17” but with his other hits like “Piece of Me,” his classic remixes of Storm Queen’s “Look Right Through,” Lana Del Rey’s “Summertime Sadness,” Rudimental’s “Powerless” and too many more to list from his more than 500 title discography.  This year has been a breakthrough year for him in the U.S. as  “17” has been supported not only by a wide community of DJ’s  but also by radio stations (both satellite and terrestrial) such as SiriusXM (a #1 BPM track), Evolution, KNHC, Music Choice, KTU in NYC and WZFL Miami, as well as MTVu and REVOLT,peaking at #1 on the overall Dance Radio Chart.  Delightfully, the song seems to continue to grow and makes its mark in the rest of the world, especially in Ireland & U.K. where it has become a bona-fide smash peaking at #1 on the Top 40 Dance Tracks chart. At Spotify the song has been streamed over 71 million times.
At the Area 10 label’s show in Miami, fans can expect to hear a unique set comprised of both MK’s hit singles including “17” and recent remixes for such heavy hitters as Rihanna, Dua Lipa, Solardo, Camelphat, and Mo w Major Lazer as well as his newest remix for Sam Smith (“Pray”).
For more information on MK, please visit
Facebook I Twitter I Soundcloud