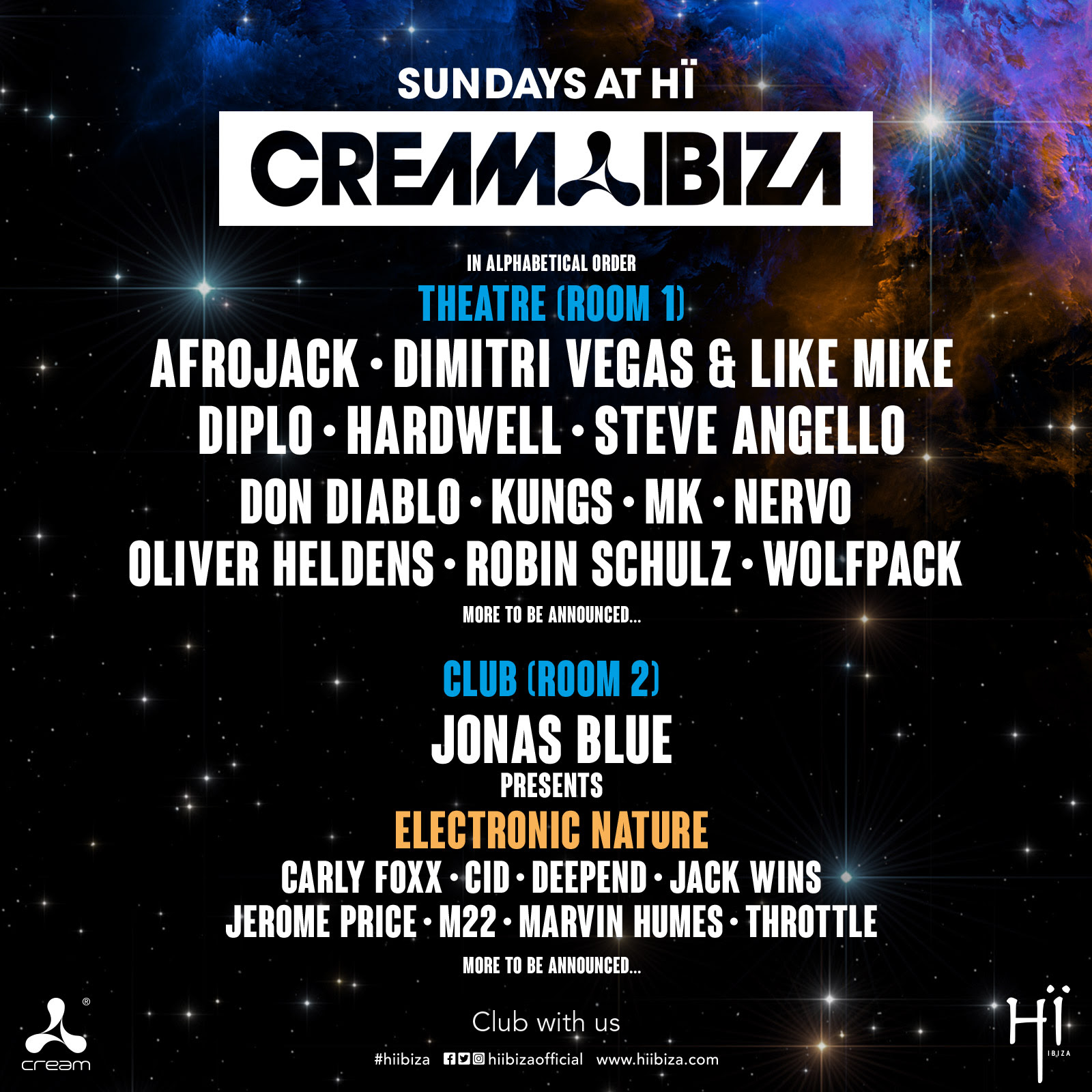 Cream Ibiza moves to its shiny new home at Hï Ibiza this summer and having already confirmed three electronic music heavyweights, namely Diplo, Hardwell and Steve Angello, as party regulars, the esteemed club brand can now reveal the next wave of big-name acts set to join them. Many of the world’s biggest DJs are confirmed to play each and every Sunday from 24th June – 23rd September including performances from Afrojack, Dimitri Vegas & Like Mike, Don Diablo, MK, NERVO and more in the Theatre, along with Jonas Blue hosting the Club room with his Electronic Nature concept each and every Sunday.

As the island’s longest running UK club night, Cream continues to be a must-visit party in Ibiza each year, with 2018 already looking set to continue the trend. Throughout the summer, Hï Ibiza will play host to Cream’s ongoing reputation for delivering some of the biggest names in dance music, mind-blowing production, a devoted crowd, and an unbeatable atmosphere.

Hï Ibiza’s Theatre will play host to regular chart topper and big room legend Afrojack, along with Dimitri Vegas and Like Mike, two acts that never fail to serve up explosive sets with plenty of huge vocals and crowd participation. House hero MK also stars. A prolific producer, as well as working alongside chart-topping acts like Rihanna and Jay Z, he’s produced some of house music’s most recognisable grooves. Dynamic Dutchman Don Diablo also joins the bill, along with French selector Kungs and effervescent Australian twins NERVO. They’ll be joined by two artists that are no stranger to the Theatre, Dutch DJ / Producer du jour Oliver Heldens and German producer Robin Schulz. Rounding out the first wave of acts for the Theatre, it’s a Hï Ibiza debut for Belgian duo Wolfpack who continue to go from strength-to-strength as they maintain their meteoric rise to the top.

With such an impressive roster of guest acts, not to mention Cream Ibiza’s long-established residents Anthony Probyn, Gareth Wyn, Andy Mac and Sean Hughes,  plus Hï Ibiza’s world-class soundsystem and mesmerising production, the 2018 Cream Ibiza season is shaping up nicely. For the complete week-by-week line-ups visit the Hï Ibiza website, and be sure to keep an eye out for more news coming soon.