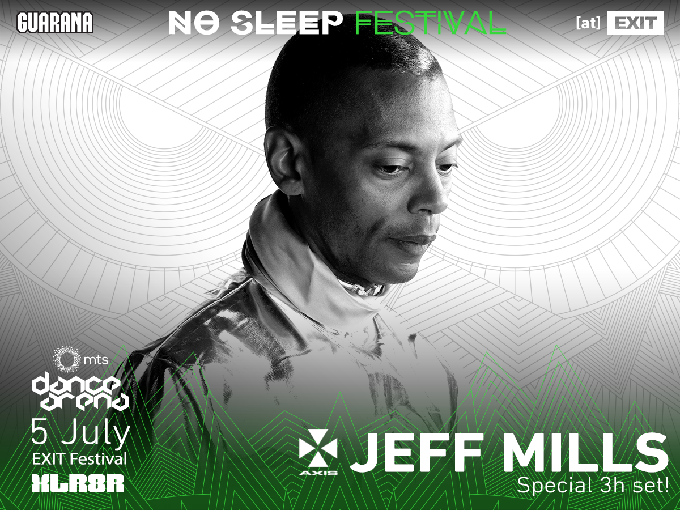 This year’s EXIT Festival will last for five days and nights, and its Day Zero has become a true festival in itself! After showcasing world-famous clubs at the Petrovaradin Fortress in Serbia and organizing parties in London, Barcelona, Brussels and other destinations, the revered EXIT’s stage, No Sleep Novi Sad, will pass through its tunnel and spill over to the neighbouring mts Dance Arena, raising the flag of the first No Sleep Festival at Exit on Wednesday, July 5!

Leading the bill in this endeavour will be the greatest techno icon of all times, a virtuoso who redefined modern music and culture, the one and only Jeff Mills! Especially for this occasion, Mills will perform a three-hour set which will have its finale with the almost life-changing experience that is globally praised sunrise above the Arena. He won’t be alone in this undertaking because, straight from the center of the Berlin scene comes another person from an entirely different planet, Ellen Alien! Also from the European capital of techno, exclusively for the No Sleep Festival, two absolute techno champions, Paula Temple and Rebekah, will have their first ever, exclusive hybrid set! In another b2b premiere, UVB, a French techo producer in a dizzying rise, and Lag, a star from Exit’s hometown Novi Sad with a rising international career that brought him his first US tour. The honor to open the sleepless night at Exit’s Day Zero belongs to regional techno heroines, Marta from Slovenia and Sugar Lobby from Belgrade, while the closing set is entrusted to the mts Dance Arena residents, Dejan Milićević and Marko Milosavljević. Equally as exciting line-up for July 5th at the core stage No Sleep Novi Sad will soon be announced, where this special No Sleep line-up within EXIT will continue up to 9th July with already confirmed acts like Function, Bjarki, Antigone b2b Francois X, Dax J, Vatican Shadow, Voiski, Harri & Domenic, Denis Sulta, Dr. Rubinstein, Charlotte de Witte, SNTS, Leo Pol, Ben Vedren and many more.

Jeff Mills has recently again been decorated as an Officer of France’s Order of Art and Letters while his audio-visual work is regular in Louvre. He is the founder of the famous Detroit techno school and its most famous organization “Underground Resistance” (The one and only UR). One of the pioneers of the art of mixing on three or more turntables is also famous for his nickname, The Wizard, which he got using in his sets more than 70 records per hour!

A top-class DJ and a person who doesn’t recognize trends but creates them instead, Ellen Alien is at the same time the boss of one of the most important labels in techno history, BPitch Control, and the woman which made famous numerous artists such as Paul Kalkbrenner, Modeselektor, Apparat and Ben Klock! Last week she published her seventh studio album “Nost”, entirely dedicated to the authentic rave energy of Berlin, and, coupled with numerous performances at leading festivals, it can be said for sure that this is the year of Alien in the techno horoscope!

Paula Temple and Rebekah had an idea to do a complex hybrid live performance at Exit with a special technical plan while their first meet ups on this performance already took place last week in Berlin. Known for being an uncompromising innovator, Paula has recently published her louded “Decon/Recon” project, while Rebekah is coming to the Petrovaradin Fortress with her new album “Fear Paralysis” (Soma).

Sebastian Michel, known as UVB, literally exploded at the international techno scene in the last couple of years, with releases which became regular during the performances of such legends as Mills, Dettmann and Surgeon. His sets are regular at the leading clubs like Berghain, Concrete, Tresor and Fuse, and he had a notable performance at Awakenings at ADE 2016 closing event. His colleague from Rotterdam’s MORD label and Exit’s resident Lag is back to the Arena where he debuted several years ago. His rise to the international scene brought him gigs in places like Paris, New York, Moscow and Berlin, to name but a few.

This year’s No Sleep parties in London, Brussels and Glasgow!
EXIT’s No Sleep Novi Sad stage has a concept of having world-known clubs each night at the acclaimed Serbian festival! Previous years #NSNS stage had showcases by Tresor, Nitsa, Concrete, Grelle Forelle, Drugstore and 20/44, this year has Glasgow’s Sub Club, Brussels’s Fuse, London’s Avant Garde and Parisian Concrete. Each year, No Sleep launch events take place in many of these clubs, and sfter Belgrade, Barcelona and Vienna, this year No Sleep events were held in Brussels and Glasgow. Charlotte de Witte and Fuse hosted Rebekah and our Tijana T on April 28, while Harri & Domenic hosted Honey Dijon at Exit’s launch party at Sub Club last Saturday! Coming up next on June 2 is No Sleep London party promoted by the Avant Garde & Exit Festival at the legendary Corsica Studios featuring Fort Romeau, Jenifer Cardini and Man Power behind the decks! No Sleep stage will have its seaside premiere this year at the Exit’s sister Sea Dance festival, where, among others, confirmed are Berghain residents Etapp Kyle and Kobosil, as well as Amelie Lens, Space Dimensions Controller, South London Ordnance, Filip Xavi, Insolate and TKNO.