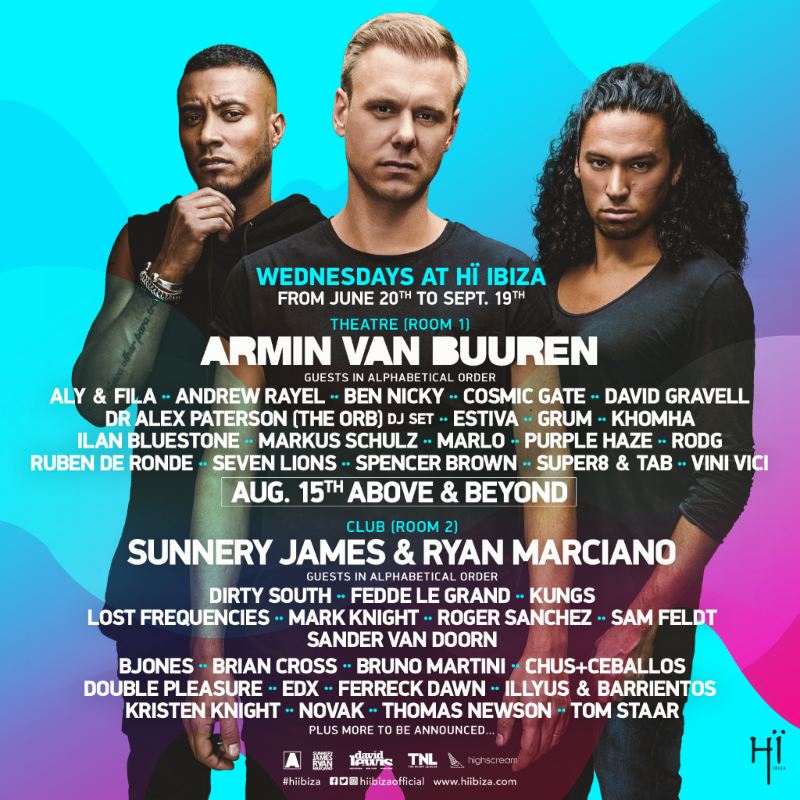 Hï Ibiza continues to set a high benchmark today with the unveiling of the world-class names that will play with Armin van Buuren and Sunnery James & Ryan Marciano at their sure to be spectacular residency which runs every Wednesday from June 20th until September 19th. As previously announced, Armin will once again take control of the Theatre whilst Sunnery James & Ryan Marciano host the Club each and every week. Playing with them across both rooms of the avant-garde venue will be international superstars like Aly & Fila, Andrew Rayel, Dirty South, Fedde Le Grand, Lost Frequencies, Mark Knight, Markus Schulz, Roger Sanchez, Sander van Doorn and Vini Vici. All this and more, plus Above & Beyond will host a very special takeover of the Theatre on 15th August.

Armin van Buuren makes a heroes return to the Hï Ibiza Theatre this summer. Last year, the Grammy-nominated star left an indelible impression and Tuesday nights at Hï Ibiza fast became one of the club’s most popular residencies thanks to its explosive soundtrack, supersized production and immersive visuals. With another series of high octane sets he is sure to be captivating clubbers throughout the summer. Joining him in the Theatre across the season are acts including Aly & Fila, Andrew Rayel, Cosmic Gate and Markus Schulz. Rising stars of the scene, Vini Vici, MaRLo, Ben Nicky, David Gravell and Seven Lions also star, plus party revellers can look forward to a set from Sander van Doorn’s alter ego Purple Haze. Masters of progressive trance, Estiva, Ilan Bluestone, Ruben de Ronde and Spencer Brown also join the bill. Watch out for two very special shows across the season, including August 1st, when Armin will play a solo set, serving up a very special musical trip; and August 15th, when Above & Beyond – one of the world’s leading electronic music acts and owners of the Anjunabeats and Anjunadeep labels – will take the reins for an exclusive headline performance.

Meanwhile, the Club offers a different sound thanks to house innovators Sunnery James & Ryan Marciano. With a long-standing background in house music, they have the knowledge of the genre and its roots at their core, and this foundation informs their eclectic sounds. Blending elements of house, tribal, techno, electro, Latin flavours and more into their productions and DJ sets, theirs is a sound which looks both to the past and to the future with plenty of groove at its heart. Hosting the intimate Club room throughout the summer, the Dutch powerhouse duo will be joined weekly by big-name guests, including big room pin-up Fedde Le Grand, Belgian hit-maker Lost Frequencies, Toolroom Knights empire head Mark Knight and enduring house pioneer Roger Sanchez. Dutch globetrotter Sander van Doorn also get in on the action, with more from Sam Feldt, Kungs, Dirty South, EDX, Chus+Ceballos and plenty of other talented artists.

Once again then, Armin van Buuren and Sunnery James & Ryan Marciano‘s party at Hï Ibiza is set to be a world-class summer party. Discover the week-by-week line-ups and book tickets at hiibiza.com.